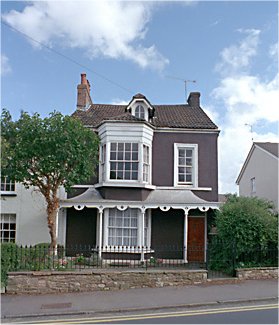 The 1840 Tithe Map shows that there was a workshop and yard on the land now occupied by number 6 Gloucester Road in Thornbury.

We have not seen the deeds of the house and we have no precise knowledge as to when the house was built.  We had always assumed that it was older than the other houses in the terrace.  In fact it is the most modern, being built some time between 1861 and 1871.  The house would have been built by George Hodges who had been living further down the terrace at number 12.  Read about George Hodges

George had become a successful builder by the time he moved into this house and he had doubled his workforce since the 1861 census.  By the 1871 census at the age of 51 he was employing ten men and one boy.  His new house in the terrace was grander, more distinctive in style and it was situated conveniently right next door to his building yard and workshops.

George and Tracey had had another son, named George, who had been born in 1862 and died in 1870 aged seven.

The 1881 census shows that George’s two eldest daughters had moved away but the other six were still living there.  By the 1891 Census, his son, John Hodges had married and moved away to Castle Street.  Note that George is still calling himself a ‘builder’ even at the age of 71.  By the 1901 census, George was widowed.  Tracey had died on 13th June 1898 aged 68 years.  George was living in the house with two unmarried daughters, Fanny Staley, aged 42 and Emma Jane aged 35.  George Hodges died on 2nd June 1905 aged 85.

The house is now called Laburnum House – we are not sure when this name was adopted.  The 1911 census shows the name as ‘Laburnum House’.  George Hodges used the name ‘Laburnum Terrace’ as early as 1885 in his accounts books, so presumably George’s house was given the name of Laburnum House at the same time.

Read about the history of the adjoining property sometimes referred to as ‘The Mill’.

See the occupants of this house
Toggle Sliding Bar Area