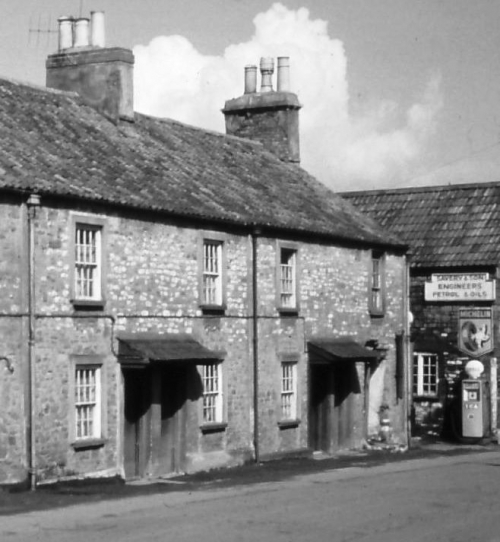 The door to 9 Gloucester Road is in shadow. It is third from the left

We have been able to trace some of the occupants of the cottage that became number 9 Gloucester Road in the Census, Land Tax and other records.

In the 1840 Tithe Survey, the house was owned by Isaac Roberts who owned the whole terrace.  Number 9 was ‘void’.

By 1851 Ann Cossham had moved to St Mary Street where she was a pauper living with her son John the blacksmith and her grandson George aged 11 and granddaughter, Frances, aged 3.  The only death of an Ann Cossham that we can find after 1841 was in 1858 when there is a death of an Ann Cossham aged 90.  By 1861 John Cossham the blacksmith was living with his widowed sister, Mary Ann Savery in Mutton Lane.  Click here to read about this branch of the Cosshams

James Nelmes – In 1851 the house was occupied by James Nelmes, a journeyman blacksmith aged 40.  He was living with his wife, Louisa aged 37, and daughters Ellen aged 9 and Emily aged 2.  They had all been born in Thornbury.

James Nelmes was a blacksmith, born in 1808, the son of James Nelmes (a member of the South Gloucestershire Militia) and his wife, Mary.  The 1840 Tithe Survey and 1841 Census indicate that James lived with Louisa, then aged 24, in one of the three houses on the site of 6 Crispin Lane, known at that time as Mutton Lane.  They then moved to the small terraced houses in Gloucester Road.  The 1859 Rate Book shows James was then living in one of the two small cottages at the bottom of Gillingstool Hill.  By 1861 they had moved to 8 Pullins Green and they had added to their family with Leonard N aged 6.  Something seems to have happened to Louisa’s age, as although it is ten years later, she is shown as only 40.  Their daughter Ellen had become a dressmaker.

In 1871 James and Louisa were still in the house at 8 Pullins Green but they were now sharing it with their daughter, Ellen and her family.  Ellen had married Edwin Wathen, a baker, in 1862.  He was the son of William Wathen, a brewer.  Edwin and Ellen had two daughters, Minnie aged 4 and Emily aged 1 month.  Ellen Wathen died and was buried on 5th September 1872 aged 29.   Edwin re-married in 1875.  His wife was Harriett Pearce Neale, the daughter of William Neale.  In 1881 Edwin and Harriett were living in 3 Horseshoe Lane with his mother, Ann Wathen aged 75.

William Pyne – In 1861 the house was occupied by William Pyne, a general gardener aged 36 from Bridgewater.  In 1851 he had been a gardener living with his wife Charlotte in Hilperton in Wiltshire.  William was 27, Charlotte was aged 36 born in Weston, Somerset.  There is no sign of Charlotte in 1861, or any of the family after 1861.

Ann Bevan – In 1871 the house was occupied by Ann Bevan, a staymaker aged 46. Ann was a widow, her husband had been Thomas Bevan, beerhouse keeper who had died in 1866 aged 47 years.

Thomas Bevan and Ann Parnell, the daughter of James Parnell, carpenter, had married in February 1846.  In the 1851 Census Thomas was a beerhouse keeper and pig dealer at the Seven Stars in what we now call Rock Street with Ann and their four children.  By the 1861 Census, Thomas and Ann had had 9 children living with them in the High Street.  Thomas was an innkeeper in what was known as The Lamb.

Thomas seems to have had business problems and left his employment as an innkeeper.  When he died in 1866 there was an inquest (Gloucester Record Office references CO1/N/12/83 and CO1/I/12/C/15 ) on Thomas Bevan a 47 year old labourer who was declared to have died by “visitation of God”.  In 1871 Ann was living with her children, James, a bootmaker aged 16, Alfred a tinman aged 14, George aged 11, Albert aged 9. Frances Stephens, the widowed sister of Ann’s was also living there.  She was aged 27 and working as a dressmaker.  In 1881 Ann had moved to 34 Castle Street where she was still operating as a staymaker.  In 1891 she was a ‘monthly nurse’ employed by George Nixon, the headmaster of the Grammar School who was living at The Priory in Castle Street.  In 1901 Ann was a corset maker living on her own in Castle Street.  She died and was buried on 23rd June 1903 aged 78 years.  She and Thomas are buried in St Mary’s Churchyard.

Note – James Bevan, the son of Thomas and Ann, was the boot and shoemaker who started in the High Street, but is better know for the time he had his shop on The Plain.  Click here to read about James Bevan

In 1876 the Special Drainage District Rate book shows that the tenant was someone called Stephens and in 1880 the only entry for the house was the name James Bendell and that was struck through which suggests he had moved or died.

James Ford – In 1881, the house was occupied by James Ford, aged 22, a groom from Thornbury and his wife, Esther, aged 21 from Lydney.  Read more about James and Esther

By 1885 the Special Drainage District Rate book shows that the house was empty again. The 1887 Rate Book shows the house was occupied by ‘Mrs Hughes’.  In the rate book of 1890 the house is again shown as “void”.

Rowland Walter Henry Carter – in 1891 the house was occupied by Rowland and his wife Elizabeth.  Rowland shown in the photo on the right was described as a letter carrier (which was an early name for ‘postman’).

Shortly after 1891 Rowland and Elizabeth moved to Poultrybrook which is the name given to the little area at the bottom of Daggs allotments.  Click here to read more

Robert was baptised on 1st March 1857, the son of William Sainsbury a labourer and his wife, Maria.  In 1881 the family were living in Gillingstool Road where Robert was a labourer aged 23.

In 1891 Robert was living in 8 Upper Bath Road with his sister, Mary Ann a housekeeper aged 22 and brother, Charles aged 14.  Robert was still working as a general labourer.

In 1896, Robert married Jemima Vizzard, the daughter of John Vizzard, labourer and his wife, Sarah Ann.  Jemima was baptised on 5th January 1873.  In the 1881 Census the Vizzard family were living in Lower Bath Road.  In the 1891 Census Jemima was a domestic servant working for Ann Wathen in Horseshoe Lane.  The Voters List shows that Robert was living in Gloucester Road at the time of his marriage in 1896.

In 1901 Robert and Jemima were living in Sibland with Robert’s younger brother, Charles. Robert was working as a mason’s labourer.  Charles was a labourer at the Saw Mills.

The Bennetts – the Rate Book of 1899 shows that the tenant is Ellen Bennett.  Ellen Bennett had married Thomas Hall Bennett on 14th May 1865 at Oldbury.  Her maiden name was Ellen Davies and her father was John Davies.  In the 1871 Census they were living at Oldbury Naite with their three daughters – Hannah aged 5, Margaret aged 4 and Elizabeth aged 5 months.

Thomas died aged 36 and was buried on 1st September 1877 at Oldbury.  By 1881 Ellen had become a nurse and she was living at Naite Road cottages, Oldbury with three children: Charles aged 6 and Emma aged 4.   In 1901 Ellen was living with Sarah Winstone in 4 Horseshoe Lane, but 9 Gloucester Road was occupied by her son, Charles Bennett.   He was a 26 year old single labourer born in Oldbury.  Charles was living on his own.  In 1891 Charles had been a farm servant, living with his brother-in-law, John Ship in Hill.  Charles died in 1908 aged 33 years.  The burial record for St Mary’s shows he was living at Gloucester Road at the time.  Charles was buried in Thornbury Cemetery on 18th July 1908.  The burial record describes him as a porter.

The Rate Book of 1910 shows that the tenant is Mrs Bennett.  The 1911 census shows us that it was Ellen Bennett living there.  She was a widow aged 70 living with help from daughter.  Ellen didn’t die until she was 85 in 1926.  However we are puzzled by the reference in the last will and testament of the house’s owner (Mary Ann Wilmot) that the house was occupied in 1914 by a ‘Sarah Bennett’.  It is possible that Mrs Wilmot didn’t know her tenants well as she also appears to have confused the name of Florence Dixon in number 5.

Mary Trussler – we know that Mary Trussler occupied the house from 1924 when she is listed as a tenant in one of the six cottages when they were put up for sale.  She is also listed as living there in the 1926 Rate Book.  She was listed in the electoral registers up to 1937.

We suspect that she was Mary Littley who was the daughter of John Littley a draper and his wife, Caroline.  Mary married Robert Trussler in Ogley Hay Church, Staffordshire on 4th January 1887.  In 1891 census they were living in 135 Milton Street, Walsall.  Robert was a lot older than Mary.  In the census he was aged 78 and described as living on his means.  He was born in Harpole in Northants.  Mary was aged 29 and born in Brownhills, Staffs.

Robert died in 1898 aged 85.  The 1901 census shows Mary living in a small 2 roomed house in South Street, Walsall.  By 1911 she had moved to Thornbury and she was now living in Kington Lane (in the house located between Wellfield and The Laundry).  We don’t know why she moved to Thornbury.  She died in Weston Super Mare in 1938 aged 77.

Henry Smith remembers them as being fairly old parents with several children.  Their childrenn Albert Eli and Bessie M are listed as living with them in some registers.  George and Sarah celebrated their Golden Wedding whilst living at Gloucester Road.

Henry Smith had a haulage business and he recalls moving one of their daughters and her husband to St Werburghs where the man was a park keeper there.  He believes that this couple later moved back into number 9.  We know that George Miller died in 1948 “after much suffering” aged 81 and he was buried in Thornbury Cemetery on 29th November 1948.  In 1949 Sarah was sharing the house her married daughter Bessie Matilda and her husband David Arthur Mackan who had married in 1949.  Sarah died in Gloucester Road aged 84 and was buried in Thornbury Cemetery on 12th March 1951.

The next family to live in the house was Raymond A. and Audrey M Wilton. They had at least one child, Susan who started school at St Mary’s School in the 1950s and gave her address as 5 Gloucester Road.  The Wiltons are shown in the registers in 1952 and 1953.

Joseph and Mabel May Norris – we have a copy of a memorandum noting that in 1950 the descendants of the Wilmot family conveyed the property to Mary May Norris.  We are not sure if they had any connection with the Wiltons who were living there in the early 1950s.  By 1957, the house the occupied by Joseph and Mary May who stayed in the house until about 1962 and were its last occupants.  Henry Smith told us that Mr Norris was quite upset when the Council condemned the property.  He was moved to a Council flat in Alveston and had to pay for the demolition.  Dick Shipp bought the property for the development of his garage – he told us he bought the house from the Wilmots although he does recall buying something from Mr Norris.  Joseph died in 1972 aged 82 years.  Mabel died in 1984 aged 91 years.