The Garage and Workshops 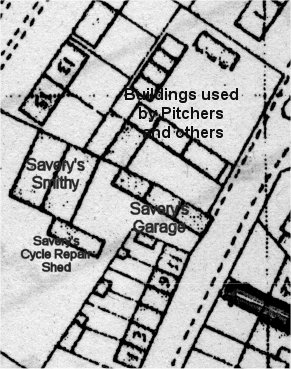 There was a group of buildings a little further down Gloucester Road just past the cottages.  The buildings had a wide range of uses over the next 150 years.

In 1840, there was a stable and yard owned by Sarah Hayward who was living on The Plain.  We have been told that it may have been used as a lodging house in the earlier days, although we have found nothing to confirm this.  The 1840 Tithe Map and another map of 1881 shows a building at right angles to the Gloucester Road which appears to be the stables.

In 1874 on the 28th November part of the property of Dr Edward Long was advertised for sale.  It was described as;

“Freehold buildings and garden land situate adjoining the Gloucester Road in the town of Thornbury now in the occupation of the executrix of the late Edward Long esq .

The buildings contain surgery and consulting room, four stall stable fitted on the newest principle, wash house pump and large cistern under coach house and saddle room and two rooms over, yards, sheds and pigstye and large productive garden (containing in the whole 5 r 27 or thereabouts).

The buildings are new and most substantial and may be converted into a dwelling house at a small outlay.”

We believe this may be a description of the whole group of buildings that were then next to the terrace of six cottages on the Gloucester Road.

In 1898, what may have been part of this property was bought by Mark Savery and with his son he opened an ironmongers’s shop in the house fronting The Plain.  At the back, at the bottom of the garden facing Gloucester Road, they built a double forge for his blacksmith’s workshop and installed a machine for making wheels and iron rings.  Following Mark’s death, Edwin took over the business and when his son, Ewart was demobbed from the First World War they set up a machine shop in an extension with an extra lathe, drilling machine and grinding machine for lawn mowers.  They added a petrol engine to power the equipment through pulleys and belts.  They also extended the business by acquiring the agency to sell Morris cars, and later became agents for Singer cars.  The ‘old stone built stable’ adjoining Gloucester Road became the garage.  To cater for the increasing number of motor cars and cycles passing through the town, they became the first garage between Bristol and Gloucester to install a hand pump for dispensing petrol. They carried on this business until it was sold to Dick Shipp in the early 1970s.  He developed an agency for Fiat cars and built a new showroom on the site of the six cottages.  The front end of the ‘stable’ building was also knocked down and rebuilt further from the road.  A magazine article of 1979 says that a new car showroom was being built.  Dick sold the business in the early 80s and it continued for a few years, concentrating mainly on the sale of cars, particularly classic cars.

The garage was finally demolished in 1987 and the flats now known as Gloucester Terrace were built.  During the construction the local council had considered using the name of ‘Laburnum Terrace’ for the new flats, but it was pointed out to them that this name had been used for the houses opposite and there might be some confusion.

The garden land and other buildings adjoining the forge

We have a copy of a report dated 1909 which considers the use of the remaining land as a possible replacement for the town market when it was being removed from The Plain.  The land was rejected as a market site in preference to the site near Bath Road.  The report mentions that the land owned by John Hodges Williams was mainly garden land but it also contained some sheds and another building.  The property seemed to have been divided into three areas.

‘Mr Pegg,’ a licensed victualler (presumably this was William Sylvester Pegg of the Swan Hotel) built a ‘large and substantially built shed’ on his part of the property.  The area behind was known as ‘the Swan garden’ presumably because it was used as a market garden to provide the hotel with fresh vegetables.  It was still being referred to by this name as late as 1934 when the Pitchers did some work there.

Walter William Pitcher also erected several large wooden sheds in which he stored his dry goods and utilised them for his carpentry and joinery works. Several older local people have mentioned that they can remember the number of gravestones stored in the yard awaiting use.  Walter William seemed to have a great need for sheds.  He had already built 13 sheds/outbuildings adjoining his house on the opposite side of Gloucester Road!

The final occupant was Kenneth Barker, a veterinary surgeon whose property consisted of stabling with coach house, lofts and surgery.

Although we do not know the full history of these buildings it is perhaps worthwhile to remember the sale description of 1874, quoted above.

In later years there were mentions of property that suggests the surgery and consulting room and the garden remained but were rented out for different uses.

This property must almost certainly have been the surgery used by Dr Long.  We believe that this lady was Ethel Riddiford who married Thomas Hookway in 1910.

We assume that the buildings immediately next to Savery’s became a garage trading initially under the name of ‘Thornbury Garage’ which is mentioned in the Thornbury Trade Directories.  Francis Edgar Russett appears to have taken over this business which had been operated by George Pitman in the buildings adjoining Laburnum House (number 6 Gloucester Road.  We think Francis moved the business elsewhere about 1927 when the Chard Brothers took over the site used by George Pitman.

Francis Russett appears in the trade directories in 1927 and 1931, and a P. Russett in 1936. We have also been told that following the Second World War, George Beard, the husband of our neighbour rented out a building and land adjoining the main garage for the repair of motor cars.  Dick Shipp acquired these buildings to use as a car workshop before he took over from Savery’s.