The area next to Laburnum House (number 6 Gloucester Road) has had many uses in the last 200 years.  It is still regularly referred to by older local people as ‘The Mill’, the ‘Transport Depot’ or the ‘Tyre Warehouse’.   Strangely none of these were very long-lived uses.  It was a very big structure, even from its earliest times.  This photograph taken at the time of the tyre depot fire shows the scale of the building.

It was originally part of the orchard land which ran behind St John Street and Gloucester Road. 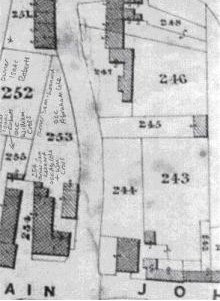 Section from 1840 Tithe Map near the Plain

The 1841 Tithe survey shows the land covered plots 247 and 246.  Both plots were owned and used by John Hodges.  Plot 247 was workshops with a yard fronting Gloucester Road.  Plot 245 was a garden located behind the workshops.

In the 1860s part of these plots was built upon with the houses that formed the final parts of the terrace.

We understand that George Pitman ran a motor engineering business from the buildings following his move from London.  George appears in the Trade Directory in 1923 operating under the name of ‘Thornbury Garage’, Gloucester Road.  We were told that George was often approached by ‘vagrants’ asking if they could earn money by doing odd jobs for George.

When he came to pay them at the end of the day they always refused, explaining that they would collect their earnings in the morning, otherwise the money would be taking off them when they entered the workhouse in the evening.

We are not sure how long the business operated there.  George and his wife moved to live in St John Street about 1926.  George does not appear in other trade directories after 1923.  Read more about George Pitman

The 1926 Valuation List shows that Edwin William Savery was the tenant of the warehouse.  Francis Edgar Russett appears in the trade directories in 1927, 1931 and 1936 as operating ‘Thornbury Garage’.  An advertisement connecting Francis to the Thornbury Garage appeared in 1923.  We can’t say for sure, but we suspect that initially Francis was the manager of the garage on behalf of Edwin Savery who ran the ironmongers at 13 The Plain and the blacksmith’s forge on the other side of Gloucester Road.  The 1925 Valuation List shows that ‘Russett’ was living at the adjoining house (now known as 6 Gloucester Road).

As we know that the Chard Brothers used the warehouse building as a Mill from 1927, then Francis must have shared the premises (there are two distinct buildings, the larger one facing the road and the other on the right) or he must have moved his business elsewhere in the road, perhaps to the site adjoining Savery’s garage which was later used by George Beard and Dick Shipp. The building seems to have become a mill around 1926.  The 1926 Rate Book shows the property was a warehouse used by the Chard Brothers, although it appears from the newspaper article of March 19th 1927 that they shared their yard with Francis Russett.

The Thornbury Trade Directories show that the Chard Brothers from 1927 to 1935 traded as ‘corn, cake and English grain merchants’ in what they called ‘The Town Mills’.   A newspaper report concerning an infringement of trading regulations was dated 20th November 1930 and refers to this company as Messrs Chard Bros Ltd of the Town Mills.

In 1935/36 the account books of W.W. Pitchers referred to the property being ‘late Chard Bros’ now ‘managed by Mr J. H. Wise, apparently on behalf of the ‘Hodges Estate’.   The books mention work done by Pitchers in 1936/37 “breaking up concrete bed, repairs to walls & roof, taking down signs, clearing rubbish in yard, repairs to Mill doors”.

In 1937 there is a reference in these accounts to work done to erect ‘TO LET’ notices on void properties owned by the estate of George Hodges.  We suspect that this refers to the Mill property. The next occupant of the property whom we have traced is Till’s Transport.  Ray Till had been operating this transport company from Morton, but moved to Gloucester Road about 1939/40.

d Montague Evans Till was born in the Thornbury area in 1909.  He was the son of Albert John Till, a market gardener and his wife Kate (nee Evans).  In 1911 they were living at Poplar Farm, Morton.  His parents moved to Pound Farm in Morton which Raymond eventually took over from them.  In 1936 Ray married Kate V. M. Floyd in Bristol.  He married again in 1957 – his second wife was Audrey N. F. Pain.  Ray died in the Cirencester area in 1971.

In 1939 the company was listed in the trade directory as being in Morton.  During the War, Till’s was very busy transporting cargo for the war effort, including  we understand, depth charges.  To facilitate access to the property an entrance was made in the rear wall which allowed lorries to enter the yard through Sawmill Lane.

Ray Till lost control of his company after the War, when the Labour Government nationalised road haulage and made Till’s part of British Road Services.  When the Conservatives got back into power in 1951, they de-nationalised road haulage and Ray Till started buying back his lorries in the 50s.  In 1952 he created a new private company which he called Thornbury Transport Company.

Local people tell us that Ray became very successful and was often seen driving his Rolls Royce car through town.

Its name appears in the 1973 trade directory as a ‘haulage and transport contractor’ whose address was ‘The Old Mill’.  Humber Warehousing later moved to Avonmouth.

In the mid 1950s, part of the building fronting the Gloucester Road yard was rented out by Thornbury Grammar School.  Many local people can remember taking their woodwork lessons with Mr Jenkins by going up the wooden staircase to the woodwork workshop on the first floor.  We have also heard that it was used by other teachers for lessons in other subjects.

Part of the building was also used by Caroline Packaging, a small company set up in 1972 to sell disposable paper plates and catering supplies.

The next occupant was United Tyre Company who operated a warehouse storing old tyres, before reputedly shipping these to Eastern Europe.  Their operations terminated in September 1992 when a fire destroyed their stock and much of the buildings. Around 1am on September 29th 1992, the warehouse was broken into by two men who deliberately punctured fuel storage tanks on the site to release the diesel and start a fire.  The police and fire brigade were soon called and the police knocked on the doors of the houses in St John Street and the top part of the Gloucester Road.  Residents were evacuated to the Royal George public house and Quaker Court sheltered housing complex.  It was not clear for some time how much more fuel was stored on the premises and whether there would be further explosions.  It took two hours to make the area safe enough for the residents to return to their homes.

The fire was spectacular and flames could be clearly seen above the roofs of the houses in St John Street.  The intense heat caused tyres to explode and the noise, together with the noise of the fire engines which attended the scene roused people as far away as Alveston.  The Doig family, only yards away, slept oblivious to everything until they got up and looked outside when they became suspicious as a result of the smell of burning rubber!  We are grateful to our neighbours who thought to make available to us the photographs that appear on this page, even though they omitted to ensure we were evacuated!

From the Rear of St John Street

The tyre warehouse was never re-opened.  The buildings were eventually demolished and the site cleared for the houses now located in Sawmill Lane.  We have shown here a few of the photographs taken at the time of the fire.

Following the fire, the property was sold to developers and the 12 houses now known as Sawmill Lane were built.