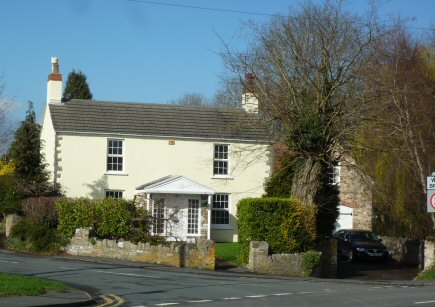 We don’t know when the house was built.  It was built by the time of the 1840 Tithe Survey.  At that time the property was known as Plot 878 a house and garden owned by Elizabeth Fewster and occupied by John Grove.   The adjoining Plot 877, a paddock of 3 roods and 24 perches, was also owned and occupied by the same people.

The first reference we have found giving the name of house as ‘The Coombe’ or ‘The Combe’ is the 1881 census.  The name is derived from the little valley following the course of the stream running past the property.

Elizabeth Fewster – Elizabeth was listed as the owner of the house and other lands in the area of The Coombe in the 1840 Tithe Survey.  Elizabeth was the widow of Thomas Fewster, a surgeon and apothecary.  The Fewsters lived at Wigmore House in Castle Street.  Click here to read more about the Fewsters

The Parnells – the 1851 census shows that James Parnell was occupying the house.  He was shown as a retired carpenter aged 60, living with his wife, Hannah was aged 45, and children Hugh aged 19, William aged 13, Elizabeth aged 10, James junior a tailor’s apprentice aged 16, Frances aged 7, and Thomas aged 5.

James was born on 8th August 1790, the 11th child (and 8th son) of Hugh Parnell, a Thornbury attorney and his wife, Ann (nee Osborne).  James appeared to own a number of properties in Thornbury, presumably inherited from his father.  James died on 26th January 1858 aged 67. Hannah continued to live at The Coombe and in the 1861 Census she is shown there as a widowed fundholder aged 54 living with her children: Hugh an agricultural labourer aged 29, Frances a dressmaker aged 17, William an agricultural labourer aged 23, and Thomas aged 15.  At the time of that census Hannah appears to be sharing the house with John Matthews, a Baptist Minister aged 45 born in Oxford and his wife, Ann Elizabeth aged 35 born in Norwich.  By 1871 the  census shows that the Matthews had moved to 9 Pullins Green.

In his Will, James Parnell allowed Hannah to live in their house until her death or until she re-married.  In September quarter 1864, Hannah married again and following this the properties he owned were sold off.  In September 1864, the devisees of James Parnell arranged the sale of the house at The Combe described as ‘a substantial and well built dwelling house comprising parlour, kitchen, back kitchen, wash-house, cellar, pantry, 4 bedrooms, pigsty, stable, productive garden and paddock of arable land containing in the whole by estimation 3 roods 24 perches.  There is a good supply of hard and soft water’.  James’s will shows that the paddock adjoining The Coombe was called ‘Clapnet Paddock’.  Click here to read more

George Ball – the 1876, 1880 and 1885 Rate Books show the house was then owned by George Ball, but we don’t know if it was George who bought it following the Parnells.

It doesn’t appear that George lived at the house.

George Ball was born in Tytherington about 1811.  The 1841 and 1851 Censuses show George farming in Sibland.  The 1851 Census shows the farm to be of 60 acres with George employing three labourers.  George was married to Ann who was considerably older than he was.  By 1861 George was a widower and in 1863 he re-married in the Bristol area.  His second wife was Harriett Tovey who was 18 years younger than George.  In the 1871 Census they lived in Sibland with their two daughters, Sarah Ann baptised on 9th March 1864 and Edith Mary baptised on 29th December 1869.  The 1881 Census shows them living at Stidcott Farm.  This Census shows Harriett was born in Littleton.

George died on 6th June 1888 aged 78.  In his will dated 20th June 1870 he gave his property to his trustees on the understanding that they should allow Harriett to live there during her life.  The 1891 Census shows that Harriett carried on Stidcott Farm with the help of her two daughters.  She died on 17th January 1894.

Frederick Burchell – the 1871 Census shows that Frederick Burchell was living at the property.  He was then described as a lime burner and farmer of 10 acres employing three men and one boy. He was aged 38 and living with his wife, Edith aged 32 from Stroud.  Frederick was the son of Daniel Burchell, the builder and Frederick took over the building business of his father.  The Rate Books show that Frederick was renting the property from George Ball.  The 1881 Census shows the Burchells continued to live the house described in the census as ‘The Combe’.  In 1883 he took the opportunity to buy some of the properties left by his father and he moved to 21 St Mary Street.   Read more about the Burchells

The Sainsburys and Hosgoods – the 1885 Rate Book shows that William Young Sainsbury had become the new tenant of the house, renting it from George Ball.  The 1891 Census shows William was a Relieving Officer aged 49 from Tytherington and he was living there with his wife, Elizabeth aged 48, both from Tytherington and their sons, Albert Edward, a master saddler and harness maker aged 25 and William Young, an accountant aged 18, both born in Thornbury.

On 28th March 1894, the property was put up for sale at auction.  It was described as

‘Coombe Cottage, a most convenient and substantially-built freehold dwelling house comprising parlour, kitchen, back kitchen, washhouse, cellar, pantry, four bedrooms, stable, coachhouse and other offices.  There is a most productive garden and paddock of arable land adjoining the whole containing by estimation 3 roods and 24 perches (more of less) and numbered respectively 877 and 878 on the Tithe Map for the Parish of Thornbury.  The properties are pleasantly situated at The Coombe, near the Town of Thornbury and adjoin the Turnpike Road and are in the occupation of Mr. W. Y. Sainsbury.  There is a good supply of hard and soft water.’

A newspaper of 31st March 1894 reported that the property ‘for many years in the occupation of Mr William Young Sainsbury let at the annual rent of £20 was purchased by Mr Hosgood at £443.” It is worth noting that a subsequent Abstract of Title shows the date of the purchase as 25th June 1894. John Howell Hosgood was married to Florence, William Young Sainsbury’s daughter.

The 1894 and 1899 Rate Books actually say that William Young Sainsbury was the owner, but we think is a mistake as by 1905 Rate Book John H Hosgood is shown as still being the owner. On 23rd May 1905 John gave Florence The Coombe ‘in consideration of the natural love and affection of him for his wife.’ He died in the Cardiff area in 1910 aged 49. The 1910 rate book shows Mrs Hosgood as the owner.

The 1901 census shows William and Elizabeth were living alone at The Coombe, except for one servant, Sarah A Riddle aged 14.  They continued living there until their deaths.  Elizabeth Hannah died on 6 June 1912 aged 70 years.  William died on 27 May 1921 aged 80 years.

On 17th October 1911 Florence Hosgood and William Young Sainsbury agreed to allow the Guardians of the Poor in Thornbury to construct a sewerage pipe running from the Workhouse under The Coombe to the Sewage Works which they planned to build in what we now know as Streamside Walk.  Florence, as the owner of the property received £80 and William as tenant received £25.  They were also given the right to link their building to the sewer.  Click here to read about the sewage works

On 9th March 1917 Florence Hosgood died.  In her will dated 30th November 1915 she appointed her father William Young Sainsbury and her son William John Hosgood, and also George Neale and Thomas Llewellyn Powell to be executors and trustees.  In a codicil she appointed her son Arthur Edward Hosgood to be an additional executor.  On 19th April 1917 the will was proved by William and Arthur Hosgood (her sons), the other three executors having renounced probate.  In 1925 the trustees sold the property to Harry Clark (see below).  Read more about the Sainsburys

Alec and Lena Whiting – the 1925 Valuation List and 1926 Prewett’s Almanac show that the Whitings were living at The Coombe.  The Valuation list shows Alec as the owner and occupier of the property, but the deeds indicate that Hosgoods still owned the property until they sold it to Harry Clark.  Alec Whiting was born in Hernhill near Faversham in Kent in 1889.  He was the son of Richard Amos Whiting, a farmer and his wife, Caroline.  In the 1901 Census they were living at Dargate House, Hernhill.  In the 1911 census Alec was still living in Faversham and on 1st January 1916 he married Selina Pordage there in St Mary’s Church.  Selina was born in 1890, the daughter of George Pordage, a carpenter and his wife, Henrietta (nee Beaney).

Alec and Selina had one daughter, Alecia, born in the Bristol area in 1921.  We don’t know why or when they came to Thornbury.  As far as we know they didn’t stay here for very long as there is no sign of them at other times.

Harry and Mary Ann Clark – on 23rd June 1925 Harry Clark bought the Coombe for £700.  The 1926 Rate Book and 1927 Electoral Register show that the house was occupied by Harry and Mary Ann Clark.  Harry had worked as a policeman for many years, mostly in the Bristol area.  On his retirement in 1923 when he had reached the position of police inspector he came to Thornbury.  He took over as licensee of The Royal George.  Harry and Mary stayed at The Coombe until 1937.

In 1932 Harry received a sum of £100 from the County Council because they planned to enlarge the sewage pipes running under The Coombe to allow the sewage from the Grammar School and Headmaster’s house to be treated in the sewage works in what we now know as Streamside Walk.  This works was built in 1911 to treat sewage from the Workhouse.  We believe that this proposal may have been superseded by the plan to build a large modern sewage work on the road to Oldbury and to connect this to all the properties in Thornbury.

By 1938 the Clarks were listed as living in Forest View, Severn Drive.  Click here to read more

On 15th February 1938 there was an exchange of land between Harry Trayhurn and the builders, Norman Tucker and Ronald Tucker.  Harry Trayhurn gave the builders the piece of land on which was subsequently built the pair of houses which became known as 16 and 18 Severn Drive.  In exchange Harry received the piece of land to the side of the Coombe that is now the driveway to 2 Church Road and a sum of £100.

We are not sure when it happened but we suspect that the Trayhurns later sold another part of their garden and the piece of land that had been given in 1938.  This allowed the construction of the bungalow which became known as Winthorpe, Church Road which was built for Miss Evelyn Smith who moved here from the Cedars on the Bristol Road.  We think that this happened about 1956.
The Trayhurns stayed until the mid 1960s.  Harry died on 11th October 1964 and the property was inherited by Millicent.  She died on 22nd April 1966.  Click here to read more

Drs John and Diana Whallett.  On 2nd August 1966 the house was bought by Michael John and Diana Joan Whallett for £4950.   They were both medical practitioners and had moved to Thornbury in 1965 to join the practice of Dr Prowse and Drs John and Alison Causton.   They lived temporarily at 19 Wye Court before moving to The Coombe.  In 1971 they sold the house and moved to Fairfield House in Castle Street.

Charles and Kathleen Gormley.  On 8th November 1971 Charles Neil Gormley and his wife Kathleen Therese bought The Coombe for £11,500.  Prior to the purchase they were living at The Old Rectory, Wickwar.  They didn’t stay there long as on 1st August 1972 they sold it to Kevin Patrick Cooney and his wife Margaret for £16,700.  The Cooneys had been living at Dean Avenue before the purchase.

In 2005, The Coombe was bought by Brendan and Jenny Wilde.