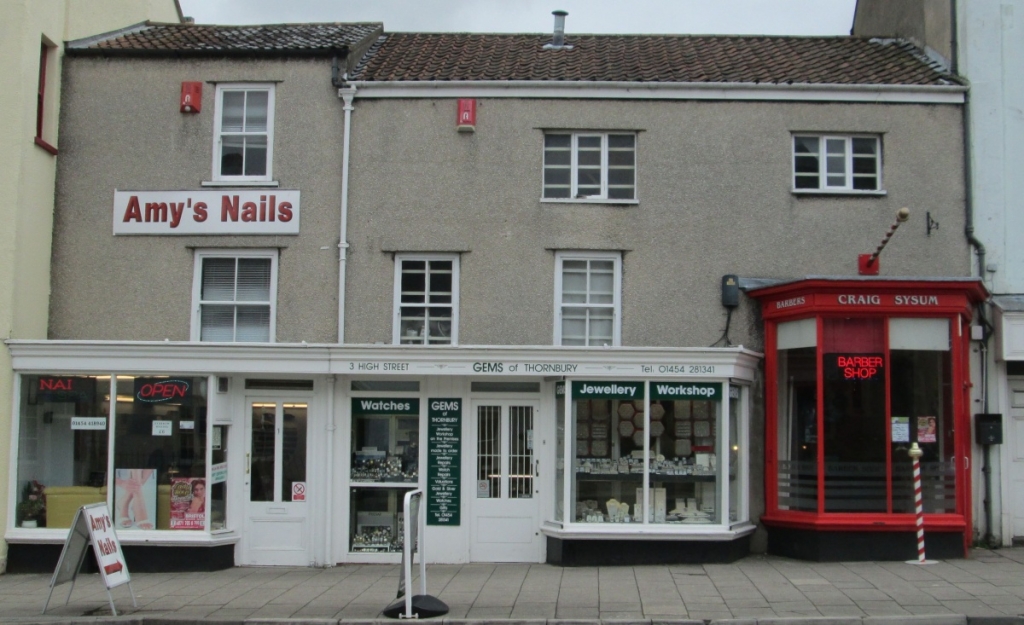 We suspect that all three shops may have been part of a single property in earlier times and we have described the early history of that property and subsequent owners on a separate webpage.  Click here to read more

Since 1841 we know of the following persons who have occupied 1 High Street as tenants:

James Bevan – the 1841 Census shows James was a dealer aged 58 living with Ann aged 56 and Edwin a mason’s apprentice aged 19, Emma milliner’s apprentice aged 16 and Fanny a corset maker aged 14, and William aged 14 and William Liddiatt a sawyer aged 29.  He was living at what we believe to be 1 High Street.  We are somewhat concerned that we are may incorrect in this assumption as it was a very small house for so many people to live in.  The 1851 census shows them still living there.  James was now aged 69, Ann aged 66. Emma was a dressmaker aged 25, Fanny a staymaker aged 23.  William was James’s nephew, a journeyman shoemaker aged 20. All were born in Thornbury.  Click here to read more

Mrs Cook– in 1858 when the property was sold to Aaron Tidman it was occupied by Mrs Cook, confectioner.  We have been unable to identify this person.

Thomas Eyles – the 1861 Census shows Thomas was living in the property alone.  He was an unmarried butcher aged 38 born in Wotton Under Edge.  Thomas returned to live in Wotton Under Edge by the 1871 census by which time he had married Hannah Fowler in 1869.

Walter Sargent – the 1867 Rate Book shows Walter was a tenant of Aaron Tidman at 1 High Street.  We suspect that Walter was Walter Frederick Sargent, the son of Robert Sargent who lived in 13 St Mary Street.  Walter’s name was crossed through which might suggest he had recently left and been replaced by someone called ‘Llewellin’.

In the 1861 Census Walter was living with his parents at 41 St Mary Street and Walter had become an apprentice shoemaker.  On 12th February 1866 Walter Frederick married Harriett Mundy in Bristol.  Later censuses show Harriett was from Crossways.  The 1871 Census shows Walter and Harriett had now moved to Chesterfield.  They were living at 31 St Helens Street with their two sons: Herbert born in Thornbury in 1866 and George Edward born in Chesterfield in 1869.  Herbert Edward died in Chesterfield in 1876 aged 8.  It is possible that Walter returned to Thornbury as the 1877 trade directory shows that Walter Sargent was a bootmaker and lived in Gloucester Road

The 1881 Census shows Walter and Harriett living in Salter Street, Berkeley.  They had had two children: George Edward born in Chesterfield in 1869 and Ernest Herbert Frederick born there in 1876.  Both sons were baptised at Berkeley on 6th March 1887.  They were still living at Salter Street in the 1891.  Then only Ernest was living with them and he had begun work as a journeyman bootmaker aged 15.

There are several family trees for Walter Frederick Sargent on Ancestry website, but none of them show any information after the 1891 census and none refer to his or Harriett’s death.  We’ve not been able to find them in the 1901 or 1911 Censuses.  A person who appears to be their son George Edward Sargent sailed from Durban to Southampton in 1916.  He was aged 46 and a bootmaker.  We note with interest however that a ‘Walter Fred Sargent’ aged 78 was a passenger on SS Wangoni sailing from Durban to Southampton in 1923.  Walter and his companion ‘Hannah Sargent’ aged 58 had embarked in Lourenco Marques, Mozambique and their address was given as 58 Semillong Lane, Northampton.  We can’t be sure that this is the same person.  We note also that there was Walter Frederick Sargent who died on 16th April 1938.  He was aged 94 and living at Denehurst, Station Road, Yate and that a Hannah Sargent died in the Yate area in 1929 aged 65.  Again we don’t know if they are the same people, and but if they are it raises the question of what happened to Harriett and who was Hannah.

Robert Phelps – the 1876 Rate Book shows Robert Phelps was occupying the property as tenant of John Williams Jnr.  According to the Morris Directory Robert was trading as a draper and glass and earthen ware dealer.  However the 1881 census shows Robert as a barber and grocer and the 1891 census shows him as a hairdresser.  He lived at 1 High Street until his death in 1899 when his second wife, Emma took over the business operating as a barber and tobacconist.  She was still at 1 High Street in the 1905 Rate Book.  She died in 1907.  Click here to read more about the Phelps family

John Blizzard – the 1910 Rate Book shows John Blizzard had taken over the property.  John was a hairdresser and tobacconist.

In the 1901 Census shows John had been at 1 High Street boarding with Emma Phelps who was distantly related to John.  The obituary of Emma’s husband, Robert Phelps, says that John was Robert’s nephew, but we believe that it was John’s father who had been Robert’s nephew).  He was a hairdresser’s assistant aged 20.

In 1910 John married a widow Cecilia Annette Sainsbury.  The 1911 census suggests John and Cecilia were living at 2 High Street.  John was a hairdresser and tobacconist aged 30 born in Oldbury on Severn.  Cecilia was a saddler and harness maker aged 34 born in Ashton, Birmingham.  Living with them was Cecilia’s son from her first marriage, Lionel Edward Sainsbury aged 5, her sister, Alice Isobel Price aged 22 born in Stroud, John’s brother, Arthur Blizzard, a hairdresser’s assistant aged 22 from Bristol and a boarder, Henry Percival Marshall, a chemist’s assistant aged 21 from Portsmouth.

There is some confusion about where the Blizzards were living and where John had his shop after their marriage.  The 1910 Rate Book shows John at 1 High Street, having presumably taken over the shop following Emma Phelps’s death.  A plan showing the properties owned by John Hodges Williams in 1911 also shows John at 1 High Street.  However as mentioned above the 1911 census shows John and Cecilia living at 2 High Street which was Cecilia’s home.  The census implies John was undertaking his hairdressing business ‘At Home’.  Click here to read about the Blizzards

We don’t know who occupied 1 High Street for a long time.  The 1925 Valuation List and 1926 Rate Book appear to imply that the owner John Hodges Williams was using it himself. A family tree on the Ancestry website shows that Charles William Dobson was born in Keighley on 16th December 1911.  He married Laura Biddle on 15th January 1944 in the Thornbury Registration District.  The two photos of Charles and Laura on the left were taken from the trees. Laura Biddle was born in Alveston and baptised there on 25th June 1907.  She was the daughter of Walter James Biddle, a painter and his wife, Amy Melinda who were living at Alveston Down at the time of the 1911 census.  Laura’s first husband was William Howard Mills whom she married in 1928.  He was the son of Gilbert Mills, a quarryman and his wife Minnie who were living at Morton at the time of the 1911 census.  Laura and William had one son and two daughters, the youngest being born in 1940.  Tragically, William was killed at Dunkirk around 30th April 1940 when he was serving as a driver in the Army Service Corps.

Registry Office – we have a letter dated 16th November 1960 from Gloucestershire County Council to the Clerk of Thornbury Parish Council in Castle Street.  The letter explains that the Register Office at that time was a former barber’s shop at 1 High Street.  This office was now being used by the health visitor and the Registrar (who was a female).  The premises were said to be unsuitable as there was no lavatory and the clerk was asked if there was more suitable accommodation for these officers.  The letter makes it plain that the office was being used to register births, marriages and deaths.

It is possible that it had been used as by the registrars for a long time.  Jack Pridham had mentioned that the building had been used in some way by the Army during the Second World War and he said that it had previously been a Registrar’s Office.

Gatfield’s jewellers – the 1967 programme for the Thornbury Flower Show and the 1969 Thornbury Town Guide notes that L. W. Gatfield ran a little jewellers and watchmaker business at 1 High Street.  The local parish magazine mentions that ‘L W Gatfield Watchmaker & Jeweller’ was located at 25a St Mary Street from September 1969 to January 1972 so he seems to have moved there.  He didn’t seem to live in Thornbury and we don’t know any more him.

Read About the tenants of 3 & 3A High Street