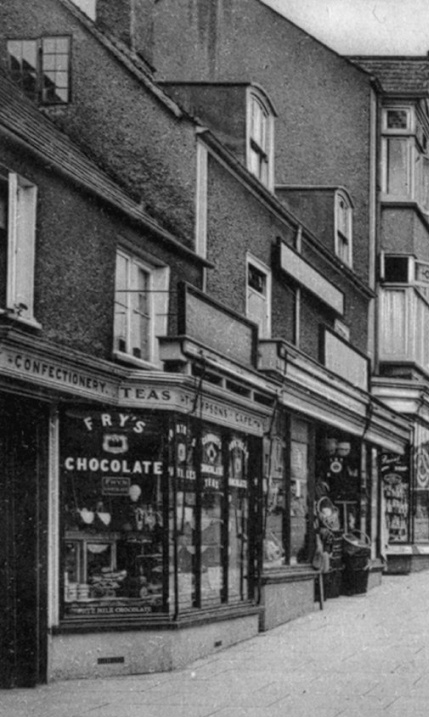 This property now consists of two separate little shop units.  The building was divided into two shops about 1880, but before that time it was one single unit.  Unfortunately we don’t any good photo which show the two shops.  The photo on the left shows Thompson Cafe in the right hand unit.   The one below on the right shows Francis Gayner in the right hand unit.

We haven’t seen the deeds of this property.  We are fortunate however that our sources such as the Rate Books and Tithe Survey show this property belonged to the ‘Feoffees of the School Lands’.  This means that the property was given to a group of trustees set up to ensure that the income from the property went to running of the Free School.  Click here to read about the Feoffees

According to the document charities vested in the corporation 1815:

‘William White by deed of gift dated 15th July 1642 gave to John Stafford the elder, William Stafford and others a messuage or tenement wherein he the said William White then dwelt and the orchard and garden belonging thereto containing one half burgage situate in the High Street in the Borough of Thornbury between the capital messuage or Inn called the Swan on the north side and the lands then of Anne Broadstone on the southside and a close of pasture or meadow in the tithing of Kington near to the town of Thornbury and by the side of the highway from Thornbury to Bristol upon trust that they should yearly allow the profits thereof to a schoolmaster to teach a school in the said borough of Thornbury who shall be chosen by the said feoffees and the vicar of Thornbury …...’
On 15th January 1647 the said tenement then in the occupation of Christopher Cam, schoomaster was conveyed to the feoffees.

The property continued to be held by the Feoffees until 1880 when they sold it to Henry Gayner for £700.  It was described as a messuage or tenement comprising a dwelling house and two shops situate in the High Street and now in the occupation of Henry Gayner at an annual rent of £17 per annum.

The Feoffees also sold the old Grammar School and house in Castle Street and Atwells School in St Mary street.  They wanted the money to buy land in Gloucester Road on which they built the new Grammar School.

In the 1670 Rent Roll it shows that the property (then described as being half a burgage) was occupied by Robert Ayler.

Samuel Thurston – the account books appear to indicate that Samuel was paying rent from about 1746 to 1755.  We know from an indenture relating to a property Samuel owned at 28 Castle Street that he was a joiner.  The Feoffee Accounts books show Samuel regularly did work for the Feoffees for which he was paid.  Presumably this involved Samuel in carrying out repairs to properties owned by the Feoffees.

Samuel was baptised at Oldbury on 3rd March 1725.  He was the son of John Thurston and his wife, Ursula.  Samuel married Mary Lewis from North Stowey and they had at least four children.  The Scribes Alcove website details the baptism of three of them: Sarah baptised in Thornbury on 17th August 1752, Molly baptised there on 13th June 1761 when she was about 2 years old 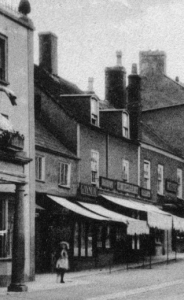 , Horatio, born on 6th May 1757 and baptised in Thornbury on 29th April 1766.  On Horatio’s baptism record it notes that Samuel was a joiner and Horatio was their fourth child.  Another Thurston source on the Internet mentions another son, Samuel born in 1662.

Based on his age at his death, Thomas would have been born about 1765.  It is likely therefore that he is the Thomas Trayherne born on 5th June 1765 and baptised on 14th October 1765.  He was the fourth child born to William Trayherne, a tailor and his wife, Hester.  The baptism records show that Thomas was a tailor, like his father.
Thomas continued to live at 19 High Street until his death.  Click here to read more

J. Niblett – the 1809 Rent Roll indicates that ‘J. Niblett’ was sharing the property with Thomas Trayherne.  We don’t know enough from this entry to be certain of his identity.  He could have been John Niblett the glazier who died in 1816 aged 55 but as we know that he was living in 54 High Street and later moved to 21 St John Street, it is more likely to be his or his son, John Niblett.  This John was born in 1790 and he became a plumber and glazier.  On 22nd March 1812 John married Mary Stinchcombe in Thornbury.  Their daughter, Mary Ann was baptised on 22nd October 1817.  Local and national newspapers in August 1825 reported a court case between William Alway and John Niblett, a plumber and glazier, in which William was claiming compensation from John as damages for what was referred to as ‘a criminal conversation’ involving William’s wife and John Niblett.  The court awarded William £120 in compensation.  The case details mentioned that William and Patience had separated, that William had give up his work and ‘become a wanderer from his home’.

Sarah Barnett – a document written in 1826 listing the property belonging to the Feoffees shows Sarah Barnett was paying £6 10s rent per annum for a house and stables.  The 1830 Rent Roll indicates that Sarah was now sharing 19 High Street with Thomas Trayherne.  The 1840 Tithe Survey confirms that Sarah was sharing Plot 190 with Thomas ‘Traherne’.  Sarah’s part of the property was described as a ‘house and stable’.

The 1841 Census shows Sarah was living in part of the property shared with Thomas Trayherne.  Sarah was described as ‘Independent’ aged 60.  Emma Barnett, presumably her daughter who was a dressmaker aged 20 was living with her.   By the 1851 Census Sarah had moved to Almondsbury.  Sarah was the widow of John Barnett, a carrier.  Click here to read more

Henry Gayner – Henry and his wife, Sarah were shown as living in the property in the 1851 Census.  We assume that they took over from Thomas Trayhurn following his death in 1847.  Click here to read about the Gayners

Henry and Sarah continued living here through the 1850s, 60s and 70s and Henry ran a drapers shop there.
In 1875 the Feoffees undertook some major alterations and repairs at Henry Gayner’s house.  We suspect this may have involved dividing the building into two units.  In July 1880 the Feoffees put the property up for sale as they wanted money to buy land in Gloucester Road on which they built the new Grammar School.  The High Street property was described as a messuage or tenement comprising a dwelling house and two shops situate in the High Street and now in the occupation of Henry Gayner at an annual rent of £17 per annum.  The Feoffees also sold the old Grammar School and house in Castle Street and Atwells School in St Mary Street.  19 High Street was sold to Henry Gayner for £700.

Francis Gayner – took over the drapery business of his parents and set about expanding his property portfolio in Thornbury.  He retained 19 High Street but the business moved to larger premises called City House at 25 High Street.  The 1910 Rate Book suggest Francis may have taken over the right hand unit of the shops and we have a photo

Francis died on 24th October 1923 and the property was owned by his widow, Lucy.  Click here to read more the Gayners

Henry Liddiatt – the 1890 Rate Book shows Henry Liddiatt had taken over as tenant of one of the shops owned by Frances Gayner.  He carried on using the shop until about 1910.  Click on the thumbnail photo on the right to see a larger image of the clock shop run by the Liddiatts. Henry was a watchmaker and jeweller.  He and his wife, Mary Ann (nee Morgan) lived at 15 Pullins Green.  Henry became so identified with his trade that he was widely known as “Clocky” Liddiatt.  Henry was listed as occupying the shop in the 1905 Rate Book, but by 1910 he had replaced by Reginald Trayhurn (see below).  Click here to read more

Edward Eddington – the 1890 Rate Book shows the second part of 19 High Street was occupied by Edward Eddington and ‘Ellen Savery’. They were still listed there in the 1899 Rate Book and the 1901 Census, but by 1905 they had moved away.  Click here to read more

Reginald Trayhurn – by the 1910 Rate Book Reginald Trayhurn had become tenant of the house.  The 1911 Census shows Reg was running a shop as a baker and confectioner.  He was aged 26 living with his wife, Amelia aged 28 from Bridgewater, their son, Henry aged 2 born in Staple Hill and a boarder, another baker, Richard Godfrey aged 60 from North Petherton.  He is listed in trade directories as being a baker.  We know from photographs that he also ran a small bakery/cake shop there.  We know Reginald got into financial difficulties and went bankrupt in 1917.  He moved to Bedminster.  Click here to read more

Thompsons Bottom Shop – the 1925 Valuation List and 1926 Rate Book show the property had been taken over by Albert Edward Thompson. Albert had opened a the bakery at their main shop at 67 High Street. The shop next to the Swan became known as ‘The Bottom Shop’ and the one at 67 High Street as ‘The Top Shop’.  The bottom shop was a cafe and a refreshment rooms selling confectionary and teas.  We understand it was run by Albert’s daughter, Betty Thompson.

In the register compiled in 1939 in preparation for the war Ronald Glenthorne Bull and his wife, Isabel Nora (nee Mahagan) were listed as living in the property, presumably in the rooms above the cafe.  They were married in Thornbury in 1936 and they had a daughter, Joyce K. born in 1937.  They were still there in the 1946 electoral register.  By 1950 they had moved to 25 North Road.

In 1959 the Thompsons sold their businesses to Christofer Bell.  They didn’t keep the Top Shop for very long, but they carried on using 23 High Street, at least the right hand part of the property, as a baker’s shop.  By 1964 the bakers shop had closed and both shops were lying vacant when there was a major fire.  Both properties were destroyed and had to be re-built.  The new shops were occupied by Brooks the Cleaners in the left hand unit and John James selling electrical goods in the right hand unit.  Click on the thumbnails below to see larger photos of the buildings before the fire, the damaged buildings and the new ones which replaced them.

Since that time the left and unit has had a lot of different occupants including the Evening Post.  The right hand unit has been used as a travel agents, initially by Lunn Poly and since by Thomsons.