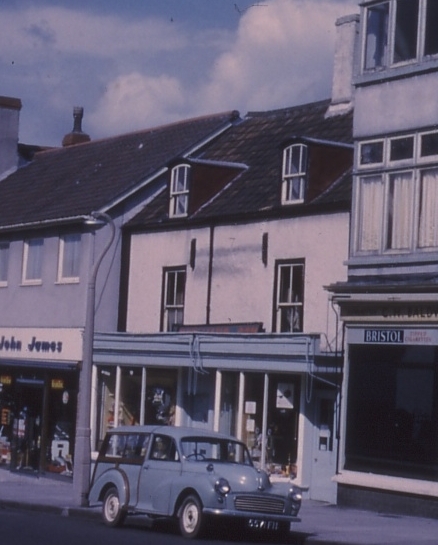 This photo was taken in the 1960s.  Number 21 High Street, Thornbury is the property in the middle of the photograph behind the Morris Oxford Traveller car.

We haven’t seen an extensive set of deeds for the property that became 21 High Street in Thornbury, but we have one or two useful documents.  An abstract of title dated 1880 mentions an indenture dated 26th December 1810 describing the property as ‘all that messuage or tenement wherein Thomas Cox for some years immediately before to and at the time of his death dwelt and Mary Cox his widow afterwards dwelt and William Williams and Mary his wife (late the said Mary Cox) did then dwell with the outhouses garden and appurts thereto adjoining and belonging situate in the High Street otherwise the Fore Street of the Borough of Thornbury aforesaid with the appurts‘.

We note that the 1769 and 1770 Assessment for Poor Rate listings appear to show Thomas Cox as living in the same property, then described as ‘late Powells’.

Thomas Cox – the Land Tax records from 1775 to 1783 show Thomas Cox as the person responsible for paying the tax on the property.  In 1784 the ‘Widow Cox’ was listed so we assume that Thomas had died.  It appears therefore that Thomas was the Thomas Cox who was a well known clockmaker in Thornbury.  He was the son of Charles Cox who had died in Alveston on 29th October 1737 aged 38.  Thomas was also the nephew of another clockmaker also called Thomas Cox.

Thomas married Mary Collier at Cromhall on 15th April 1762 and was buried there on 15th January 1784.  His executors were George Rolph senior and junior and they inserted the following message in the Gloucestershire Journal of February 16th 1784:

“Mr Thomas Cox late of the town of Thornbury in the County of Gloucester a very eminent clock and watchmaker being dead all his late stock of working tools &c are to be disposed of immediately to any clock or watchmaker at a fair appraisement:  And if purchased by a person of good character and ingenious in the business, he may have the singular advantage of taking and carrying on the same in the late Mr Cox’s shop which will be let for that purpose.”

On 30th May 1791 Thomas’s widow, Mary, married William Williams.  The land tax records from 1796 to 1812 show William Williams as the owner and occupant of the property.  We don’t know any more about William and Mary.

William is first shown as the owner of the property (described as ‘late Williams’) in 1814 land tax record.  We assume William Tait must have died by 1819 as his wife, Elizabeth Tait, is shown as the owner in the land tax records.  We can’t find any trace of them in the Thornbury parish records so they may not have lived in the town and they let the property at 21 High Street to William Ford.

The Fords – the 1819 Land Tax records shows William Ford had moved into the shop at 21 High Street, initially as the tenant of Elizabeth Tait.  We are bit confused by the details shown in an abstract of title, but they indicate that William had become financially involved with the property as early as 1810, possibly by offering a mortgage to the Taits.

William continued to occupy the premises, although Elizabeth Tait continued to shown as owner until 1829.  From 1830 William Ford is shown as owner.  There is a reference in the abstract indicating that by the time of William Ford’s death on 6th December 1839 he had never received any interest from the Taits and therefore assumed control of the property.  In his will dated 17th February 1834 William bequeathed all his real estate to his wife, Ann, during her life time and then it was shared amongst his three children, Ann, Thomas and Joseph.

William was aged 63 when he was buried on 10th December 1839.  The 1840 Tithe Survey (which was based on information collected in the years before 1840) shows that William owned and occupied Plot 189, a house and garden.

The 1841 Census shows Thomas Ford as the head of the household at 21 High Street.  He was a saddler aged 30.  He was living with his brother Joseph, a carpenter aged 25, mother Ann an ‘independent’ aged 60 and sister, Ann a dressmaker aged 35.

Ann died aged 72 and was buried on 26th October 1847.  In the 1851 census Thomas was still at 21 High Street.  He was an unmarried saddler aged 43 living with his brother, Joseph, now also a saddler aged 36, and their sister, Ann then running a fancy depository aged 47.  It took some time for them to sort out their father’s estate.  On 2nd July 1853 Ann, Joseph and Thomas came to an agreement whereby Joseph was given the property subject to a payment by Joseph to Ann.  We suspect Thomas received something as part of the estate but we haven’t seen the full details of the agreement.  He married and went off to live at 24 High Street.  Click here to read more

The 1861 Census shows Joseph Ford had taken over as head of 21 High Street.  He was a saddler and harness maker aged 49.  His sister, Ann, was still living with him.  She was running a Berlin Deposit 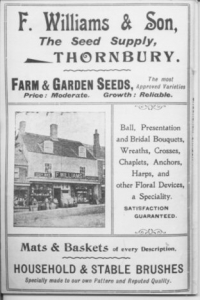 By his will dated 4th June 1879 Joseph Ford put all his real and personal estate in trust and arranged for his trustees to pay the rents, interest and income from his estate to his sister, Ann Ford during her lifetime and after her death the property should be sold.  Unfortunately the abstract doesn’t say who the profits of the sale etc were to be given to.
In the event, Ann died on 29th August 1879 aged 79.  Joseph died on 5th December 1879 aged 69.  On 20th July 1880 the property was sold to George Wetmore for £595.

George Wetmore – he acquired the property on 20th July 1880 for £595.  The 1881 census shows George was a master tailor aged 36.  He was living at 21 High Street with his wife, Hester A a confectioner aged 36 from Marshfield and their children: George W. H. aged 3, Matilda R aged 2 and Edith J aged 3 months.  Click here to read more

The Seed Supply – the 1885 Rate Book shows that Francis Williams the brushmaker and seedsman had occupied the property as tenant.  He had moved here from 33 High Street.  Read more about Francis Williams

The thumbnail photo on the right below shows the shop brightly decorated at the time of the Coronation of King George V in 1910.  Click on the thumbnail to see a larger image.  It is particularly interesting to see the large number of little glass pots which were attached to the wall on the second floor level to form an outline of the letters ‘GR’.  The Thornbury Museum has a number of these pots in their collection and it is apparent that they were used to hold candles.  It must have been quite a display.

On 7th December 1914 John Hodges Williams, outfitter sold the property to Francis Williams, assistant overseer for £900.  It was described as ‘all that messuage or dwelling house/shop/premises, garden numbered 189 on Tithe Map bounded on the north by premises occupied by Reginald Trayhurn and south by premises occupied by William John Blizzard.  Also all that piece or parcel of garden ground together with stable and coachhouse erected thereon containing in the whole 13 perches or thereabouts situate in Thornbury and opening on a lane leading to St Mary Street and numbered 186 on Tithe Map, both properties are now in the occupation of the purchaser’.

Francis was joined in the business by his grandsons, Francis Arthur and Herbert Reginald Champion, the sons of their daughter, Charlotte and her husband, Reginald Arthur H Champion.  Francis died on 29th April 1927 aged 77.  Charlotte died on 23rd May 1939 aged 85.  Read about the Champions

On 12th July 1961 Francis Arthur Champion of Abu Sueir, 4 Church Road and Herbert Reginald Champion of Severn Villa 60 High Street, both fruiterers and greengrocers vested themselves of The Seed Supply 21 High Street under the will of their mother.  On 1st January 1968 they sold the property to Thornbury Rural District Council for £17,000.  After a short 6 month lease granted to Norman King to sell cycles and cycle accessories from two rooms in the building, it was demolished and to enable the re-development of the St Mary Centre.