THE WINE AND SPIRITS SHOP

Thomas Anstey ran a wine and spirit shop at 24 High Street for about 35 years from 1884 to 1920 when he died.  The property was actually owned by his wife, Emily, who had been left it by her aunt, Elizabeth Ford.  Trade directories show that Thomas was also a china dealer and we suspect that this side of the business was run by Emily who had continued the business run by her aunt.

Thomas died in 1920 and Emily died the following year.  The premises at 24 High Street was put up for sale at auction in May 1921.  It was described as a valuable freehold full licensed shop, dwelling house, garden etc and business and goodwill of a wine and spirit merchant in the High Street belonging to the estate of late Mr Thomas Anstey of Thornbury.  The property contained a double-fronted shop, drawing room, dining room and sitting room, all with cupboards, lobby with cupboard and five bedrooms.  Kitchen, scullery and larder and store room with two store rooms over and a wash house.  The outbuildings included a range of shedding, stabling for three, two fowl houses and pigstyes.  The garden had two heated greenhouses and a cucumber house.

Read more about Thomas Anstey and his family

W. E. Truebody & Co – various records show that the next owner of the property was W. E. Truebody (or Trubody) & Co. who continued trading there as a wine and spirit merchants.  They were advertising under that name in September 1921 in the South Gloucestershire Chronicle and they are listed in several trade directories up to 1936.  It appears from the 1925 Valuation List and 1926 Rate Book that although Trubody owned the property,  it was occupied by Thomas Gale, who was presumably managing it on their behalf.

Thomas and Elizabeth Gale – the 1925 Valuation list and 1926 Rate Books both show Thomas Gale as the occupant of the property.  We assume that they managed the wine and spirit merchants on behalf of the owners, Truebody & Co.  The 1927 electoral register shows that this was Thomas Frederick Gale and his wife, Elizabeth Maud Gale.  Thomas Frederick Bartlett Gale was born in Thornbury in 1889 and baptised on 2nd February 1890.  His parents were Stephen Gale, a shoemaker and his wife, Elizabeth.  Read about Thomas’s family background and early life

Thomas had married Elizabeth Maud May in Thornbury in 1916.  They appear to have had three children: Douglas W was born on 7th June 1919 and his birth was registered in Bristol, Leslie J whose birth was registered in Newton Abbott in 1921 but he died there in 1920 and Rowena Margaret who was born in Thornbury on 21st January 1925.  Douglas started at the Council Infants in 1923 and the family’s address at that time was the High Street.  This might indicate when Thomas took over 24 High Street, although Douglas was taken away from the Council School in 1925 for a short time when he was shown as going to Malvern and he then returned from Malvern in 1926.  In 1928 Douglas was admitted to Thornbury Grammar School in 1928.

We don’t know how long Thomas was manager of Truebody’s wine and spirit merchants.  He died aged 40 was buried in Thornbury Cemetery on 2nd January 1930.  The burial record shows he died at 23 Pembroke Road, Clifton, but his obituary says he died in Bristol Royal Infirmary where he had been admitted after a sudden illness just before Christmas.  The obituary refers to the fact that Thomas had a slight leg deformity which curtailed his activities, but that he had nevertheless took a keen and active interest in many areas of the town.  He was a supporter of the Wesleyan Football Club and at the time of his death was their vice president and chairman.  He played cricket for Thornbury Cricket Club in the position of wicket-keeper where his agility was equal to many who didn’t suffer from the same handicap.  He was treasurer of the Court Pride of Thornbury Ancient Order of Foresters and he had held the secretaryship of the Thornbury Traders Association.  He had a keen interest in horticulture and played a prominent part in the reorganisation of the Thornbury Horticultural Society.

In 1931 Elizabeth Maud was still being listed in electoral register as living in the High Street.  In 1931 she re-married.  Her second husband was Leslie W. J. Pocock.  They appeared to have moved away from Thornbury. 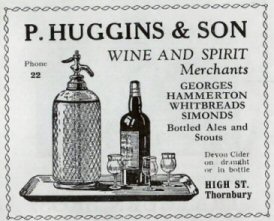 The Huggins – at some time between 1931 and 1935 the shop was taken over by the Huggins family, Percy and Elizabeth Huggins and their son Percy Reginald Grantley.  They were there in the 1935 electoral register and continued there until 1954.

Percy Knapp Huggins was born Barnby Dun in South Yorkshire on 21st May 1874.  He was the son of Joseph Knapp Huggins and his wife, Catherine (nee Hawley).  The 1891 census shows Joseph was a licensed victualler at The Globe in Frampton Cotterell.  By that census Percy had become a butcher.  In 1898 Percy married Elizabeth Stone in St Saviours Church, Coalpit Heath.  She was born on 13th September 1875.

The 1901 census shows Percy as a butcher living in Church Lane, Frampton Cotterell.  He was living with Elizabeth aged 25 who was born in Westerleigh and their children: Frederick Charles aged 1 and Percival Reginald Grantley aged 9 months (born on 22nd June 1900).  There was also a nurse living with the family as a servant, presumably to give Elizabeth a hand with the children.  The 1911 census shows Percy and the family were living in High Street, Iron Acton.  By this time they had had two more children: Eric Roy aged 5 and Kathleen Elizabeth aged 3. An article published on 11th October 1948, at the time of their golden wedding anniversary, says Percy had been a butcher in Iron Acton for 30 years.

We don’t know when or what made them move to Thornbury.  The 1935 electoral register lists Percy, Elizabeth and Percy Reginald living in the High Street.  We understand that it was Percy and ‘Grantley’ who ran the off licence.  During the war Grantley was also an ARP Warden.

They carried on living at 26 High Street.  We understand from locals that the shop was remembered by them because of the smell of drink.  Beer was sold by the jugful.  Elizabeth was remembered as a large and friendly lady frequently seen looking out of the upstairs window watching things happening in the High Street.

In 1948 Percy and Elizabeth celebrated their Golden Wedding and the photo of them below was published in the Gazette.

Percy died in Bristol in 1954 aged 79.  He was buried in Thornbury Cemetery on 14th January 1954.  This seems to have led Grantley to give up the business.  The 1958 electoral register shows Elizabeth and Grantley living at High Porch in Park Road.

Percy’s obituary in the Gazette mentioned he was a member of the Thornbury Bridge Club, a committee member of Thornbury Conservatives and a member of the Royal Lodge of Faith and Friendship at Berkeley.  Elizabeth died in 1969.  Her death was also registered in Bristol.  Grantley died in 1965 at High Porch.

E. A Mitchell – the Thornbury Flower programme of 1958 shows that 24 High Street was called “Mitchells”.  It sold beer, wine and spirits and was owned by E. A Mitchell Limited.  We have a photograph of the shop with E A Mitchell above it that appears to have been taken in the 1970s.

We are grateful to Richard Hope-Hawkins for sending us the history of the Mitchell’s wine merchant business which at one time had as many as 17 shops in Bristol and the surrounding areas.  Richard’s great grandparents, George and Ellen Anne Mitchell had taken over the Three Blackbirds pub in Stapleton Road, Bristol in 1895 and George added a brewery at the back of the pub.  When George died in 1903, Ellen Ann took over as licensee and she went on to expand the business and become a wine and spirit merchant with their headquarters in West Street, St Phillips.  She died in 1935 aged 88.  In 1938 the business was sold to Victoria Wine Company who continued to run the shops under the name of ‘E. A. Mitchells’ because of the good reputation which they had earned in the Bristol area. Heritage had been a gift shop and coffee shop for about forty years when it was taken over by Tabi Marsh and her father Gary in 2014.  The shop was updated and restored and was operating as a thriving business in September 2015 when a fire that started in a neighbouring building spread to the rear of Heritage.   The intense fire that resulted required the attendance of eight fire engines and the rear extension to the building was gutted (as can be seen in the photograph on the left).

The shop and coffee shop did not fully reopen until 2017 and is now trading as Papilio at Heritage.