Councell's and The Coop shop 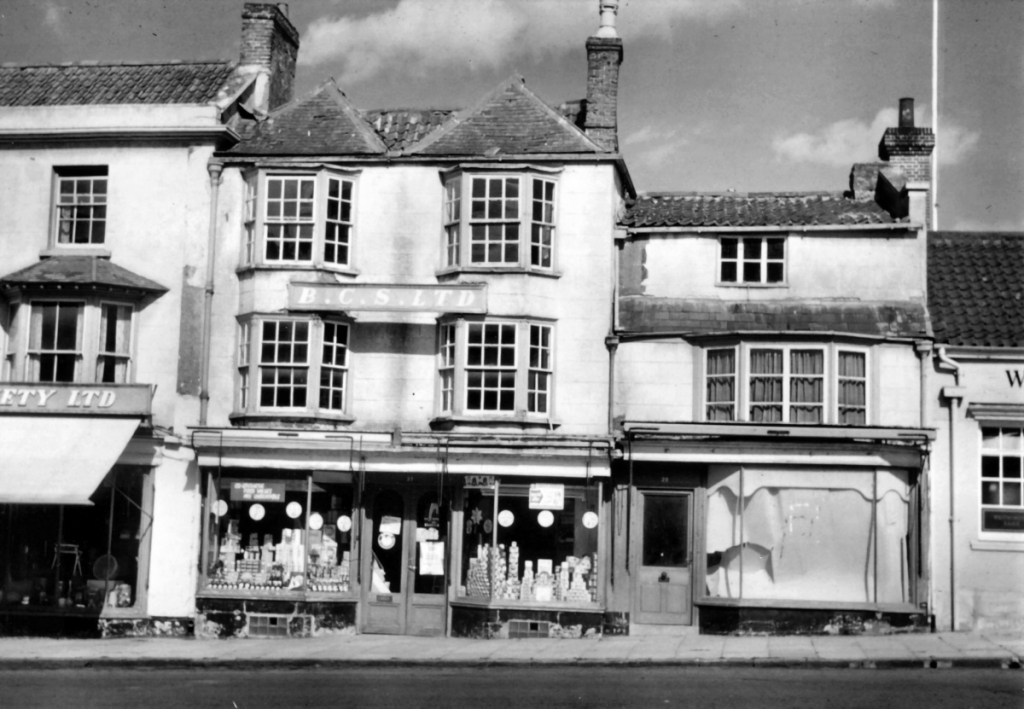 The photograph above shows 27 High Street in Thornbury in the 1960s when it was occupied by the Bristol Co-operative Society (more commonly known as ‘the Co-op’).  We don’t known when the imposing three story building was first built, but we have been able to establish there has been a shop on the site since the mid 1700’s.

The earliest information we have on the property that became 27 High Street was the 1750 assessment of poor rate listing which shows that Alice Thurston was paying 2 shillings.  The property for which Alice was liable was described as being ‘for Webbs’.

Alice Thurston (later Alice Vaughan) – Alice’s maiden name was Alice Webb.  We suspect that she was the Alice Webb baptised at Thornbury on 18th February 1719, the daughter of John Webb and his wife, Elizabeth (nee Shepheard).

On 26th January 1741 Alice married Hugh Thurston.  Hugh was an attorney at law, the third son of John and Ursula Thurston.  Hugh and Alice had at least 6 children: Elizabeth, Ursula, Martha, Susannah, Alicia and Hugh.  We have omitted the baptisms dates of Elizabeth and Ursula because Scribes Alcove website indicates that they were both baptised twice.  Both appear to have been born about 1743.  Martha was baptised on 3rd June 1745, Susannah baptised 11th October 1746, Alicia baptised on 24th August 1748 and Hugh baptised on 19th January 1750 after the death of his father who died on 7th June 1749.  Their daughter, Elizabeth died young and was buried on 3rd September 1749.

Alice Thurston is listed on the assessment of poor rate in 1750 when the property was described as being ‘late Webbs’.  This appears to indicate that Alice may have inherited the property from her Webb connections.

On 20th January 1760 Alice married again in Thornbury.  Her second husband was Andrew Vaughan, a widower.  At the time of the marriage he was living in St Vedast, Foster Lane, London.  It appears that they settled in Thornbury because Andrew was listed as a juror at the Borough Court in 1760.  In his last will and testament proved on 15th December 1763 Andrew was described as a dealer in silver wares of Thornbury.  He left Alice his diamond ring, pictures and china.  He left two daughters, Catherine and Frances ‘linen which I had lately sent from London to Thornbury’ and some income on money he was owed, although they were expected to pay off any debts due on his business as a silver merchant.  He mentioned that since his marriage with Alice, he ‘had permitted her to follow and keep on the business as mercer and shopkeeper she did before separately from my own as a dealer in silver ware’.  He only left Alice the stock that was part of her own business and the goods and chattels she possessed before her marriage to him.

Alice, now shown as Alice Vaughan is listed in the 1769 assessment of poor rate described as ‘for her dwelling house late Webbs’.  Subsequent land tax records in 1770 and 1780 show Alice as owner and occupant of the property.  From 1781 to 1784 she was listed as letting the property to Richard Martin.  Richard was Alice’s son-in-law having married her daughter, Susannah on 15th October 1768.  We have no further records until 1796 when Richard Martin is shown as owning the house.  Alice died aged 79 and was buried on 15th May 1799.

Richard Martin – Richard was shown as the occupant of 27 High Street in the land tax records of 1781 to 1784.  The records from 1796 to 1814 show him as the owner and occupant of the property.  Richard was married to the daughter of the previous owner (see above)

Richard was a druggist and apothecary.  On 15th October 1767 he married Susannah Thurston in Thornbury.  They appeared to settle initially in Richard’s hometown of Ledbury in Herefordshire where their son, Hugh Thurston Martin, was baptised on 3rd May 1768.  Richard and Susannah moved to Thornbury by about 1781 as they are listed in the Land Tax records as living in the house owned by Alice Vaughan in the records from 1781 to 1784.

It appears that Richard was a Wesleyan Methodist and was associated with the opening of the new chapel in Chapel Street.  He was also Mayor of Thornbury in 1796.

The 1784 Bailey directory has two entries for Richard Martin in Thornbury – the first shows him as a druggist and apothecary, the second as a linen draper.  The linen drapery may have been looked after by Susannah.  The Land Tax records show that he continued to live here until his death on 23rd April 1817 aged 71.  He was buried on 29th April 1817.  Richard’s last will dated 26th August 1806 describes him as a ‘Gentleman’.  He set up two trust funds, the income from which would be paid to his wife during her life, and after her death the funds would be his two grandchildren, the children of Richard and Susannah’s only child, Hugh, who had died in 1795 aged 27.  The first trust of £2500 was to be given to his grandson, Richard, and the second trust of £2000 would be for his grand-daughter, Susannah.

The 1819 Land Tax records shows that Susannah had moved to Castle Street, possibly to the property that is now Clematis Cottage where she had become the tenant of Alexander Smith.  By 1821 she had moved to 3 Castle Street as tenant of Richard Gwynn and we believe she lived here until her death in July 1828.  We know that Richard and Susannah’s son, Hugh Thurston Martin, became a linen draper.  He died and was buried on 12th March 1795 aged 27.  Click here to read more The Councells – the land tax records from 1819 to 1825 indicate that Thomas Inman Councell was renting the property from John Barton.  The 1826 record shows that Thomas was now the owner and occupant.  Thomas and his sons, Edward Gough and William Henry went on to establish the business known as ‘Councell and Sons’ which traded from 27 and 29 High Street for over 100 years.  Click here to read more

The Co-op – it carried on trading out of the buildings acquired from the Councell family in January 1946.  We are grateful to Elizabeth Minors for telling us that her father, Albert King was appointed as the first manager of the shop.  Albert and his wife, Glynis, moved into the apartment above the shop.  In December 1946 Albert was licensed as a

[Lay] Reader on the recommendation of the Revd Robert Rawstorne.  On the majority of Sundays he assisted at services at St Mary’s and invariably took Evensong at St Paul’s the Hackett.  Glynis worked as a sister in the Thornbury Hospital, initially on the Wards, but then as a Casualty Sister when that department opened.

Elizabeth has provided us with a useful description of the shop.  She spent the early years of her life living in the apartment above the shop and came to know the shop well.  In Elizabeth’s words:

“my earliest memories are of Tony Billett who lived near to the Cattle Market in Bath Road, who ran the ‘provisions’ counter on the right hand side of the shop i.e. bacon, butter [which arrived in blocks which were placed on china trays to be cut up], cheese [which also came in blocks]. etc.  The cutting machine for the bacon, was to say the least, a ‘health and safety’ hazard.  It was meticulously cleaned every evening with scalding hot water.

On the left were groceries.  Tea and sugar came in sacks and were weighed into blue paper bags.  Other items such as biscuits and glace cherries were also ‘loose’ and had to be weighed and packed.  I have memories of both being stored in enamel ‘bread bins’ under the counter.  To this day I have a love of ‘glace cherries’.

Among the other assistants I remember Norman Dunster from Rudgeway who was the assistant manager, Eileen King [later Parsons] from Gloucester Road, Mabel Symes who lived at 52 High Street and Pam Rogers from St Mary’s Street who was the cashier.  Customers purchases were listed on a bill, totalled up and the bill and money sent to the cash desk by means of a cup on a wire!  Frequently the cup fell off and the contents were scattered around the shop!  The weighing scales in the grocery department were brass which had to be cleaned weekly.  Dick Sims drove ‘the van’ which took boxes of orders out to the villages each day.  People, when he called, usually gave their ‘order’ for the following week however a few people would telephone their order which was taken down in long hand! – my earliest memories are of a telephone with a mouth piece on the wall with a separate ear piece.

Saturday was ‘half day’ with the shop closing at 1.00 pm.

Occasionally a container of ice cream would be delivered to the Coop [packed in dry ice].  We never knew when this was going to arrive however it always sold out immediately – my mother told the story of a freezing cold winter day and my grandmother, who was visiting from Wales, and myself sitting in front of a roaring fire eating ice-cream.  It was a rare treat!

On Co-op‘ Dividend Days’ the people collecting their dividend would stretch from ‘The Co-op’ down to ‘The Swan Hotel’ for the best part of the afternoon“.

The Co-op bought two other properties, 23 and 25 High Street, acquired in 1954 from the Gayner family.  It incorporated 25 High Street and part of 23 High Street into their premises.  We understand from Elizabeth Minors that this part of the shop continued as a drapery.  The other part of 23 High Street was let out to other tenants.
We would really like to hear more from anyone who worked in the Councell or the Co-op shops.  It would be lovely to have some photographs taken inside the shops.

On 31st March 1971 these properties were sold to Thornbury Rural District Council for the re-development of the shopping centre.  They demolished the buildings and created St Mary Arcade, a ‘pedestrianised’ row of shops running between the High Street and St Mary Street.  They paid the Co-op £36,000 for the four properties.