In the 1600s the properties we now know as 30 to 34 High Street in Thornbury (and possibly also 36 High Street) formed part of a larger group of properties including the buildings, yard and garden to the rear accessed through the little alleyway see above which is sometimes known as The Shambles or more recently as ‘The Medieval Lane’.

We have included an extract from the 1840 Tithe Map in order to clarify the properties which we are referring to, although by that time the property had been divided into separate plots: 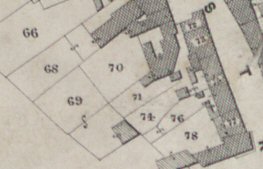 Plot 75 – two houses and courts owned by Elizabeth Clark, one occupied by herself, the other by Samuel Smith (now 34 High Street).

The Thurstons and the Kings – we know an indenture dated 3rd April 1771 that the property had previously belonged to Robert Thurston and since of his grandson, John Thurston, and then John’s daughter, Grace King and then on her death to her son, John King.  On 3rd April 1771 John and his wife, Rebecca, sold the property to Benjamin Parnell.  Read more about the Thurstons and Kings

Benjamin Parnell – Benjamin was a maltster of Tytherington.  We know from Abstracts of Title for 32 and 34 High Street that Benjamin purchased property for £130 from John King and his wife, Rebecca by an indenture of lease and release dated 2nd and 3rd April 1771.  The property was described as:

‘All that messuage or tenement or dwelling house wherein Thomas Pearce blacksmith, Samuel Musgrave glazier and William Russell shoemaker did formerly dwell situate and being in the High Street of the Town of Thornbury all which said premises are now in the several tenures or occupations of Joseph Latch nailer, Andrew Whitfield glazier and Arnold Smith cooper as tenants thereof.  All which said messuages or tenements dwelling house and premises were formerly the estate and inheritance of one Robert Thurston heretofore of Thornbury gentleman deceased since that of John Thurston (grandson of the said Robert Thurston) also deceased afterwards of Grace King widow (daughter of the said John Thurston) upon whose death the same descended and came to the said John King her eldest son and heir at law’.

At some stage before 1770, Benjamin appears to have broken up the property and sold it off as separate lots, but we don’t have a complete set of indentures showing these sales.