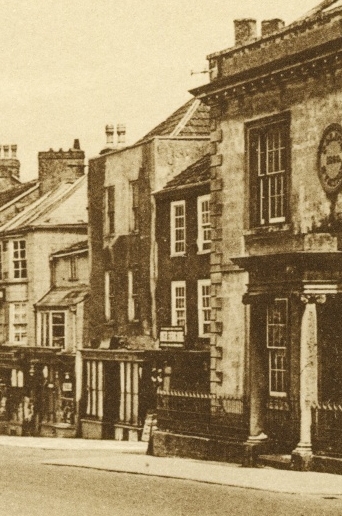 The photographs in our collection show some major changes in building which became known as 31 High Street.  In the earlier photograph shown on the left, the property is the tallest three storey building in the centre of the photo.  By the time of the second photo (on the right below) which was taken in 1950s this building had been demolished and replaced by the single storey building which was built for the Westminster Bank in 1932.

We haven’t seen the deeds of this property.  Our earliest knowledge is based upon the last will and testament of George Cossham who owned the property next door (33 High S
treet).  The will shows that George’s property ‘adjoined on the north side to a messuage late in the occupation of John Longman perukemaker and now of Isaac Pullin a currier‘.

John Longman – the land tax records show that John had been occupying the owner and occupant of the property from 1775 or earlier.  The 1770 assessment of poor rate listings show John was probably there in 1770.

The will of George Cossham dated 1785 referred to above shows that John was a perukemaker (i.e. wigmaker).  It seems strange that there was another John Longman who was innkeeper of The Lamb (then at 29 High Street) between 1754 and 1757.  They may have been the same person or father and son.
One John Longman married Hannah Pearce on 20th October 1751 which would rule him as being the innkeeper in 1755.  Their son, William, was born on 6th May 1757.  When William was baptised on 30th December 1788 the baptism record showed that his parents were Quakers.

The 1780 and 1781 land tax records show that John was renting out the property to Benjamin Pearce (see below).

The 1783 land tax record shows that John was renting the property to Mr Pullin (presumably the Isaac Pullen mentioned as being the occupant when George Cossham wrote his will in 1785 referring to 33 High Street).  We note that the 1784 land tax record shows that George Rolph was the owner of the property and ‘Longman’ was the tenant.  We cannot explain this, although it is possible that John may have died and that George, as a solicitor, was acting as the trustee of his estate. 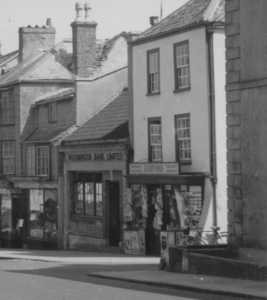 Benjamin Pierce (or Pearce) – we assume that Benjamin was the Benjamin Pierce born on 18th November 1741, the son of Benjamin and Hannah Pearce.  His father was likely to be the one who was a tenant of the property next door (29 High Street).

Benjamin was not baptised until 13th October 1762 which might suggest that he was a Quaker like the Longmans who owned the property.  On 14th March 1763 Benjamin married Sarah Thurston in Thornbury St Marys Church.  The witnesses at the wedding were Martha and Susannah Thurston.  Benjamin and Sarah had at least one child, Sarah, who was born on 9th May 1765 and baptised on 31st July 1765.  The baptism record indicates that Benjamin was a barber.  He is also described as a perukemaker (a wigmaker) in the deeds of the property now known as Dot Cottage, 7 Castle Street.  Benjamin and his wife, Sarah were owners of that property on 13th May 1768 when it was being let out to a tenant.  Then on 15th August 1771 they sold it for £20.

In Abraham’s will, he divided all his property messuages and estate equally between two of his daughters; Emma and Eliza except certain properties specifically left to the other daughter Ann Child Freem.  The 1830 Rent Roll and 1840 Tithe Survey show that the property at 31 High Street descended to Emma Riddiford who married William Mawley in 1833.  Click here to read about Abraham

Richard Ellis – the 1841 census shows Richard Ellis shows Richard Ellis was a druggist aged 32 and his wife, Jane was 25.  They appear to be sharing the property with Martha Sainsbury, who was shown as being an Independent aged 65 and Ann Jefferies a dressmaker aged 18, and William Parsons a stationer aged 45.  The Ellis’s were still there in the 1851 census by which time they had a son, Charles Edward aged 2 living them.  By the time of the 1859 Rate Book, the Ellis’s had moved to 43 High Street, a property which Richard had bought in 1845.  Click here to read more

Thomas Bevan – the 1859 Rate Book shows the property occupied by Thomas Bevan.  The 1861 census also shows Thomas occupying the property.  He was described as an innkeeper aged 42 from Thornbury living there with his wife, Ann aged 36 and 9 children.  George Ford, the local pub historian, says that this pub was known as ‘The Lamb‘, but we have found nothing to confirm this.

The 1862 Rate Book doesn’t show Thomas’s name as occupant of Harriett Mawley’s property, but has an entry out of sequence in the rate book showing the word ‘arrears’ against Thomas Bevan with the name of Harriett Mawley pencilled in above.  We don’t know the implication of this entry.  Thomas died in 1866.  Click here to read about Thomas

Henry Trayhurn – the 1867 Rate Book shows the property owned by Harriett Mawley was occupied by Henry Trayhurn.  The 1871 census shows Henry was a tailor aged 41 living with his wife, Hettey aged 40 a draper, both born in Thornbury.  Henry was still listed as the occupant in the 1876 Rate Book but by 1880 his name was crossed out.  A sale of Henry’s stock and fixtures from his drapers, tailor and haberdashers shop was held on 3rd and 4th January 1881.  The notice said Henry was ‘giving up his business’.

We must admit to some confusion over Henry.  There were two other Henry Trayhurns born about the same time, both tailors with Thornbury connections.  One of the other Henrys was born in 1823, the son of John Trayhurn a tailor and his wife, Hester.  He lived in Chapel Street with his parents, never married and died in 1871.  Another Henry married Hester Davis in Bristol in 1841.  In the 1841 census this Henry and Hester were living at 37 High Street.  Henry was a tailor aged 20 and his wife, Hester also aged 20.  We don’t know what happened to this Henry and it is possible that Hester died and Henry re-married.

We believe that the Henry who was living at 31 High Street married Hettey Wither Beale in Bristol area in 1842. Hettey was baptised in Oldbury on 18th March 1821, the daughter of John Beale a cordwainer and his wife, Elizabeth who both lived at Cowhill.  We note that in the 1861 census they were living at 84 Frederick Street in Cardiff.  Henry Trayhurn was described as a tailor aged 33 born in Cowhill living with Hetty aged 32 who was born in Chewstoke.  We don’t know what happened to Henry and Hettey after they left Thornbury.

John Hodges Williams – 1880 John Hodges Williams had become the tenant of the property still owned by Harriett Mawley.  We are not sure what John did with the property.  He started his business career as a draper based in Victoria House, High Street, but he went on to acquire several other properties in the High Street and to extend the range of goods in which he traded.

An indenture dated 1932 when John sold the property to the Westminster Bank refers to the property having been known as ‘Bon Marche’.  We know however from other documents that Bon Marche was the name John used for his premises at the corner of the High Street and The Plain.

It is frustrating to find so little information about what John did with the property.  The 1881, 1891, 1901 and 1911 censuses don’t show any information, which probably means that John was using the shop but no-one was living in the rest of the property.  The 1905, 1907 and 1910 Rate Books note that the property was ‘void’ i.e untenanted.  Click here to read about John

Ernest Percy Weatherhead – the 1925 Valuation List and 1926 Rate Book show that John Hodges Williams was letting the property to Ernest Percy Weatherhead.  We have a photograph of Len Smith’s shop at 33 High Street which shows the name over 31 High Street was ‘Weatherhead’s’.  We can’t say for sure what they used it for as their main shop was opposite at 14 High Street.  The name board includes the word ‘& Mattings’ which suggest that this was the floor covering department.  In another photograph there are some wicker chairs piled up untidily in the window, which might suggest that the building was being used for storage.  Click here to read about Weatherheads

Westminster Bank – on 13th October 1932 John Hodges Williams sold the property to the Westminster Bank for £250.  It was described as ‘all that piece or parcel of land situate on the east side of the High Street in the Town and Borough of Thornbury and numbered 180 on the Tithe Map of the said Parish and being bounded on the north by property of Messrs Councell and Sons and on the south or on some part thereof by property belonging to Leonard Smith.  Together with the shop and some ruinous buildings standing thereon or on some part thereof and together also with a right of way over the lane on the east side thereof to the road adjoining known as the Back Street or St Mary Street which said property is now or was some time since known as the Bon Marche‘.

The closure of the newsagents shop at 33 High Street enabled them to acquire the property and expand.  They demolished the old newsagent’s building and erected the two story building.

The two buildings were subsequently used as a branch of the Britannia Building Society, until it closed in 2015.