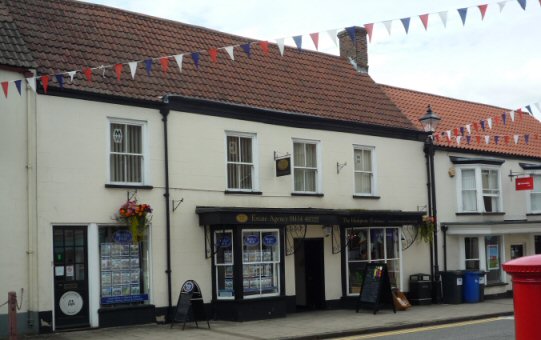 In the 1600’s this property formed part of a larger group of properties covering the premises now known as 30 to 34 High Street and the buildings, yard and garden to the rear accessed through the little alleyway sometimes known as The Shambles or more recently as ‘The Medieval Lane’.

We know from later indentures and abstracts of title that the property was owned by Robert Thurston and descended through to his grandson, John Thurston, then to John’s daughter, Grace Thurston who married John King, and to their son, John King jnr. On 2nd and 3rd April 1771 John King (jnr) and his wife, Rebecca, sold the property to Benjamin Parnell.  Click here to read about the early history

Joseph Latch – on 4th and 5th July 1771 Joseph acquired the property in which he was already living.  Joseph was a nailer.  The property was described as ‘all that messuage or tenement and dwelling house wherein said Joseph Latch then did dwell consisting of a kitchen shop and workshop with the several chambers and rooms lying above and over the same between the party walls or partitions as the same has been divided from other buildings on the north and south sides thereof up to the roof of the said messuage or tenement and also all that yard or backside lying adjoining and on the west side of the said two shops or some part thereof containing in length 10 yards and in breadth 4 yards or thereabouts extending westward to the wall of a brewhouse belonging to said Benjamin Parnell and Andrew Whitfield and other walls there.  And also all and singular edifices etc all which said premises are situated and lying on the west side of the High Street and were formerly in the tenure or occupation of said Joseph Latch as tenant thereof and is part of a larger messuage or tenement or dwelling house formerly in the tenure or occupation of Thomas Pearce blacksmith Samuel Musgrave glazier and William Russell shoemaker‘.

Of Joseph other surviving children:

Following Joseph’s death the property was occupied by Robert Ford, a tinman and Joseph Latch’s daughter, Elizabeth.  In the Abstract of Title it was described as ‘consisting of a kitchen shop and workshop with the several chambers lying above etc which said workshop had then been lately converted into a retail shop.  And also all that yard or backside etc extending westward to a brewhouse theretofore belonging to Benjamin Parnell and Andrew Whitfield but then to Richard Withers and ..(blank) Cossham and other walls there together with the shop or outhouse then lately erected on part of said yard etc etc.  All which said messuage tenement etc were then in several tenures or occupations of said Robert Ford and said Elizabeth Latch as his tenant thereof – to hold unto said W. Ford for 1000 years at peppercorn rent‘.

It appears that William Latch arranged a mortgage with William Ford of Falfield on 14th July 1800 and had some difficulty in paying his debts.  On 28th September 1802 there was an agreement between William Latch and his sisters, Elizabeth and Mary Latch who agreed to purchase the premises subject to the mortgage and this indemnified William from having to pay back the money he owed on the understanding that he would pay £3 for each year for life.

Elizabeth’s share of the property became owned by William Clark, the shoemaker following their marriage on 19th June 1803.  On 27th July 1805, William Clark bought out Mary’s half share in the property from Mary and her husband, Benjamin Leach and paid off the outstanding mortgage owned to William Ford.

William Latch died on 22nd August 1855 aged 80.  He doesn’t appear to have married and his personal estate was shared by his nephews and nieces, the children of his married sister, Hester Vaughan.

William Clark the younger – William was a shoemaker who became the owner of the property through his marriage in 1803 to Elizabeth Latch (see above) and then by buying her sister’s (Mary’s) half share in 1805.  Click here to read about William Clark

The property was then described as being ‘all that late messuage or dwelling house wherein the said Joseph Latch for many years before and at the time of his decease dwelt and the said Robert Ford and Elizabeth Leach then E. Latch afterwards dwelt consisting of the said kitchen shop and workshop with several chambers and lying over and above the same which said messuage tenement or dwelling house had been lately converted into and was then used as two distinct messuages tenements or dwellings or shops.  And also in the said yard or backside lying adjoining on the westward part of the said messuage tenement or dwelling house or some part thereof.  And also of and in the said shop or workshop lately erected on part of the said yard or backside which said two messuages tenements or dwelling houses shops hereditaments and premises were then in the several occupations of said Robert Ford and Betty Facey as tenants thereof to said B. Leach and said W. Clark‘.

On 28th October 1824 William Clark arranged a loan of £200 with his sister in law, Mary Leach.  The property was then described as ‘All that messuage or tenement or dwelling house wherein said Joseph Latch for many years immediately before and at the time of his decease dwelt and Robert Ford tinman and E. Latch afterwards dwelt consisting of a kitchen shop and workshop with several chambers and rooms lying over and above same but which said messuage tenement or dwelling house hath since been converted into and was then used as two distinct messuages or dwelling houses and shops and also a yard or backside lying and adjoining and on the westward part of the said messuages or dwellings or some part thereof with the shop or outhouse erected on part of said yard or backside which said two messuages or dwellings shops hereditaments and premises above mentioned and described were formerly in the several occupations of said Robert Ford and Betty Facey afterwards of John Vaughan and John Williams and then of  Mary Sperrin widow and James Barnett as tenant thereof and are situate lying and being on the west side of the High Street otherwise Fore Street of the town of Thornbury bounded on the north side by a messuage or dwelling house belonging to and then in the occupation of Thomas Smith tailor and on the south side by a messuage or dwelling house belonging to an then in the occupation of David Baxter ‘.

In William Clark’s last will and testament dated 21st August 1821 he gave and devised Richard Scarlett of Thornbury gent all his messuages lands tenements whatsoever and wheresoever situate upon trust to permit his wife to receive and take rents and profits thereof and to allow her to reside in and occupy his dwellinghouse during her life, she paying all interest and to become due on all debts bearing interest which he should owe at his decease and also to keep said premises in repair.  He directed that the trustees should sell and dispose of all other property with all convenient speed after the decease of his wife and appointed Richard Scarlett and Jno. Poole of Bristol iron monger as joint executors.

William died in 1837 aged 81.  The 1840 Tithe Survey shows that Elizabeth owned this property described as Plot 75 two houses and courts.  She occupied one of the houses and the other was occupied by Samuel Smith.  The 1841 census lists Elizabeth as living further down the west side of the High Street.  The 1851 census shows she was living in 34 High Street described as a landed proprietor aged 77.  Her brother, William Latch, was living with her.  He was described as a pauper aged 75 and noted as being ‘Blind’.  Elizabeth Clark widow died aged 82 on 30th June 1852 and she was buried in Thornbury Churchyard.

The Corporation – the Mayors Accounts Book for 1857 shows that the Corporation bought the two messages being offered by Richard Scarlett (who had been executor for the previous owner, William Clark) for £170 on 21st December 1857.  The money was paid out of the fund reserved by the Corporation for the re-building of two cottages at the bottom of St Mary Street which had fallen into ruins several years previously and consequently been taken down and removed.  The purchase of an existing house was thought to be cheaper than to build new ones.  It had also been suggested in 1855 that the Corporation should use its surplus money on acquiring ‘real property’ rather than leaving it in the bank and they had authorised the search for suitable property.

In 1882 the Sanitary Authority notified that the Corporation that there was a nuisance at the house occupied by by J. Brown (i.e. 34 High Street).  They had identified that the privy was improperly constructed and gave notice that the privies had to be converted to water closets, earth closet or ash pit.

Following the Municipal Corporations Act 1883, the Corporation became extinct and in 1890 their responsibilities for running their property were vested in the Thornbury Town Trustees according to a scheme of the Charities Commissioners.

The property was let as two separate units until about 1906 when Edward Brown combined it into one unit.  Since that time, it was occupied by the Food Control Committee for a short period after the First World War, as a private house occupied by Annie Lawrence and then John Croome Cullimore and then by Fred Sainsbury who used the house as his home and the adjoining yard for his business as a house decorator.  During Fred’s occupancy he had tall double doors on the left hand unit of the property which allowed him to get his trucks and equipment through the the rear of the property.

In more recent times the property has reverted to being used as two separate shops and has separate business accommodation upstairs.  The left hand unit was used by the Dursley Gazette office for many years and then by Besley Hill Estate Agents.  The right hand unit has been used by Cornerstone estate agents, and then a small delicatessen known as Hampton’s Small World.  The firm of solicitors, McCarthy & White, occupy the upper floor.