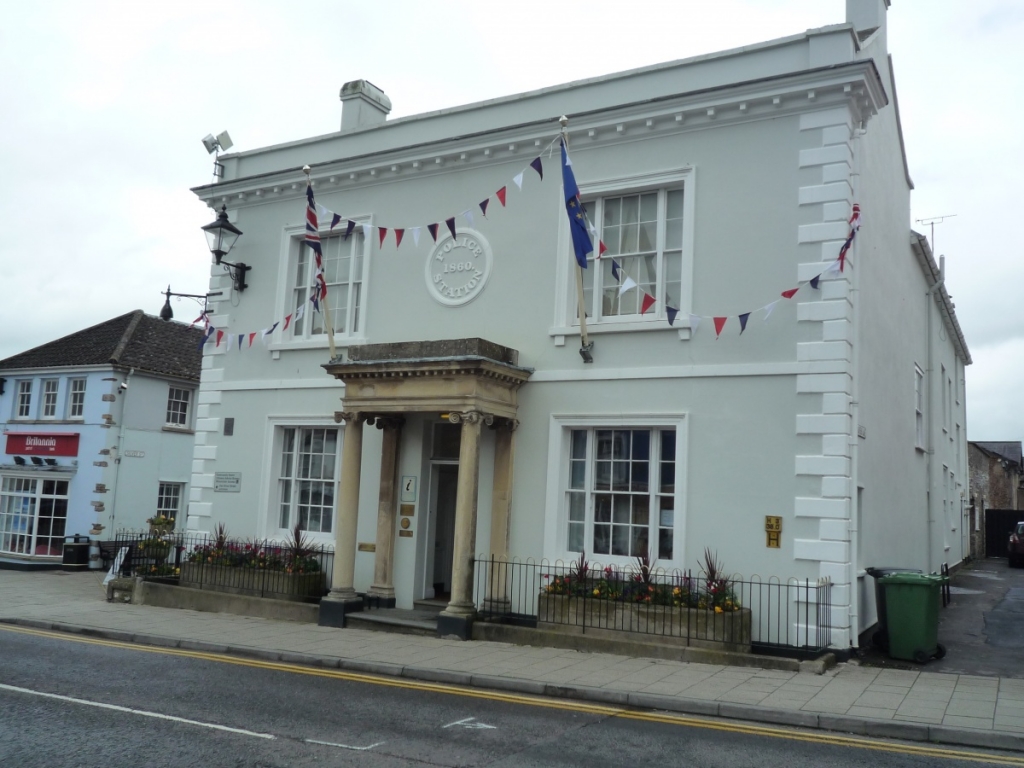 The building now known as The Town Hall, 35 High Street has an extremely interesting and complex history.  The present building was built around 1785 as a private house by George Rolph, an attorney and a member of one of Thornbury’s richer families.  His son William later incorporated two other properties at the rear of the premises so that his property stretched from the High Street back to St Mary Street.

In 1859 the property was sold and the house converted for use as the Town’s Police Station.  At that time the rear end of the property fronting St Mary Street and holding the stables, coach-house, yard and part of the garden was sold off separately to Thomas Arnold, a brewer.  Thomas converted the buildings and made a beerhouse in the name of The Ale and Porter Stores, which soon became shortened to The Porter Stores.  The name was changed later to The Barrel and is now The Hawkes House.

The full extent of the Rolph property was created out of three separate properties, each with its own history.  Most of our knowledge relates to the part of the property fronting the High Street which is built on the site of an old property once used as an inn called the Tavern.  We have traced the history of this building from 1590.  Click here to read about The Tavern.

We only know a little of the history of the other two plots at the rear.  Click here to read about these plots

The Rolphs – about 1783 George Rolph bought the property fronting the High Street from Martha Cullimore.   According to an indenture dated 27th December 1785 (when George was borrowing money from William Salmon) George had had a new mansion house built on the site of the old building which had been the Tavern.  At some later George acquired two other properties at the rear.  When George died in 1815 he left the properties to his children, William and Annis although she renounced her claim.  William Rolph enlarged his main property by incorporating the two properties at the rear creating a large garden with stable and coach-houses fronting St Mary Street.  When William died in 1858 the property became the Town Police Station and Magistrate Court.

The Rolphs were an important family in Thornbury.  Click here to read specifically about George and William Rolph

When William Rolph’s property was put up for sale at auction in February 1859 it was described as:

Richard Cowle – on 3rd May 1859 at least part of the premises was bought by Richard Cowle.  He was a licensed victualler who had been living in Thornbury but had moved to Bristol in 1858.  To enable him to buy the property on the High Street Richard arranged a mortgage of £400 from James Vezey, a Bristol grocer and another £200 from James Smart, a yeoman of Kington.

We do not know the full extent of Richard’s purchase.  At the time of the auction in February 1859 the property had covered the whole block back to St Mary Street.  There was another auction on 23rd September 1859 for the sale of the coach-house, stables, brewhouse, yard and garden which had attached to William Rolph’s property.  It is possible that Richard Cowle may have bought the whole property and auctioned off the rear of the property whilst selling the front part to the Police Authority on the same day.  Click here to read more about Richard Cowle

The Police Station and Magistrates Court – on 23rd September 1859 Richard Cowle sold the property to various Justices of the Peace representing Gloucestershire County Council (who were the Police Authority) for £750.

Before researching the history of the property we had assumed that the present building had been erected specifically for the Police Station.  However when the County Council advertised for tenders to do the necessary work they described the work as ‘sundry alterations and additions to a house …. for the purposes of adapting the same for a police station and petty sessional court’.  It is interesting to note that the advert was placed in the newspaper on 10th September 1859, two weeks before the property had been legally purchased.

The builder charged with doing the work was Daniel Burchell.  A newspaper report appeared on 19th November 1859 indicating that ‘Mr Burchell of Thornbury was making rapid progress and the works were expected to be completed in about two months and will, we have no doubt, form a great improvement to the High Street’.  When the Sessional Court opened in March 1860, the report said ‘The bench is so situated as to enable the magistrates to command the entire area without being themselves subject to inconvenient collision.  The space for the gentlemen of the law and the public is ample…. the press has been provided for in a comfortable corner, from which all that passes may be well seen and heard, and a desk which makes the record of the same an easy task’.  The police accounts show that Daniel Burchell was paid £525 for the work done in 1859, 1860 and up to Easter 1861. 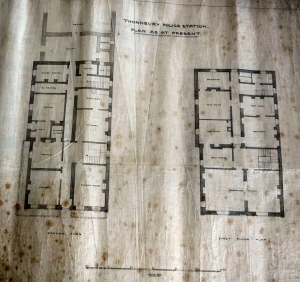 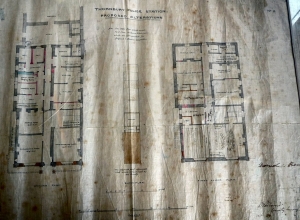 The property continued to be used as a Police Station and Court House for over 120 years.  A new police station was built in Rock Street in 1973 and the Police moved from their High Street premises in November of that year.  The Court House continued at 37 High Street until it closed about 1986 and moved to Yate.  The building in the High Street was left unoccupied for several years.  Click here to read more about Thornbury policemen and police stations

The Town Hall – in April 1992 the Town Council acquired the old Police Station and Court House at 35 High Street from Avon County Council.  They moved there in 1994 after the old court room was converted into a Council Chamber.  The building became the administrative headquarters of the Council.  Click here to link to the Town Council’s own website