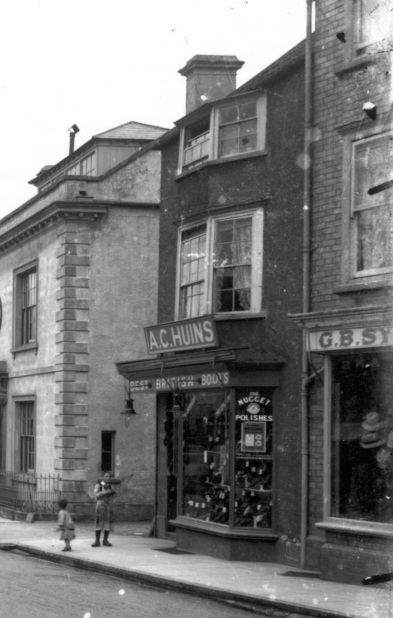 We are particularly grateful to Paul Ford for allowing us to look through the deeds and show us around the interesting property that became 37 High Street in Thornbury.  This enabled us to confirm the history which we had put together from other sources and it added some exciting details to that history.

The deeds suggest that the present building was built by George Rolph around 1800 on the site of a ruinous building.  We had assumed that this meant the old building had been demolished and a new building erected.  However, although we are not experts at establishing the age of a building, there are several features in the building which might indicate that it was a lot older.

The oldest document in Paul’s collection was an indenture dated October 1820 in which William Rolph conveyed the property to Mary Adams.  We were thrilled to find that it included the following extremely detailed description of the ownership and occupation of the property and adjoining properties was back into the 1700’s.

‘All that messuage or dwellinghouse wherein Mrs Sarah Rolph widow lately inhabited and Richard Scarlett doth now dwell containing in the whole by estimation two burgages (be it more or less) situate lying and being within the borough of Thornbury over against a place there formerly called The High Cross having the messuage and premises formerly of John Bird deceased since of John Eeles and Thomas Barton and now of John Niblett on the south and east parts or sides and a land there called Soapers Lane on the north part or side thereof and adjoining and adjoining and fronting the street there called the High Street otherwise the Fore Street on the west part thereof which said messuage or dwellinghouse and premises were some years since newly erected and built by the said George Rolph deceased on the site or place where a messuage or tenement (formerly two messuages or tenements) lately stood and when standing was theretofore in the occupation of John White and afterwards inhabited by William Grove, Luke Rose and Elizabeth Grove respectively and was bought and purchased by the said George Rolph to him and his heirs in fee simple of and from William Latch‘.

The reference to ‘two burgages’ is puzzling as the property described only seems to be one of three parts of what we would consider to be one burgage plot.  The other parts being the garden plot mentioned below and the middle plot associated with the adjoining property (39 High Street) which provided them with access onto Soapers Lane (also mentioned below).  We assume that the ‘two burgages’ was the size of an original plot which was later split to form two or three adjoining properties.

The reference to The High Cross indicates that central part of the High Street opposite this building and the Town Hall was called by that name.  We assume that this means a cross had been erected there in the past although we have found no other references to that in any other documents we have seen.

It is interesting to note that there were two messuages on this plot at one time, although we assume that this would have been at some time before the mid 1700’s (when we know the one messuage which replaced the two was occupied by the persons listed in the indenture).

We believe that the reference to ‘William Latch’ is a mistake.  George Rolph’s will dated 1815 clearly states that he bought the property from Joseph Latch (who had been appointed by the previous owner of the property, William Grove, to act as his executor.

The indenture also provided a detailed description of a garden which at the time of the indenture was separated from the main building by the property adjoining on the south and east parts:

‘and also all that garden situate and being at or near the eastward end and on the southward side of the said lane called Soapers Lane and lying opposite to a messuage or tenement formerly in the occupation of Anthony Wysse and wherein Joseph Walker doth now dwell which said garden was formerly bought and purchased by the said George Rolph to him and his heirs of and from the said Anthony Wysse which said messuage or dwellinghouse garden and premises hereinbefore particularly mentioned and intended to be hereby granted and released are situate lying and being in the town and borough of Thornbury and are now in the tenure or occupation of the said Richard Scarlett as tenant together with all houses outhouses ….’.

There was one important exclusion in the indenture to the property being conveyed:

‘except and always reserved out of this grant and release as not intended to pass hereby the Necessary House sometime since erected and built by the said George Rolph on the northwest corner of the said garden hereby granted and released and which same necessary house is now used and occupied with the messuage or dwellinghouse now in the occupation of George Scarlett and Betty Wisse widow‘.

Thus George Rolph ensured that his tenants living in the property on the corner of St Mary Street and the north side of Soapers Lane (on the location currently occupied by Hawkes House) could use the toilet he had provided for them on the other side of Soapers Lane.

We have written about the owners and occupiers of the property on a separate page.  Click here to see OWNERS and OCCUPIERS