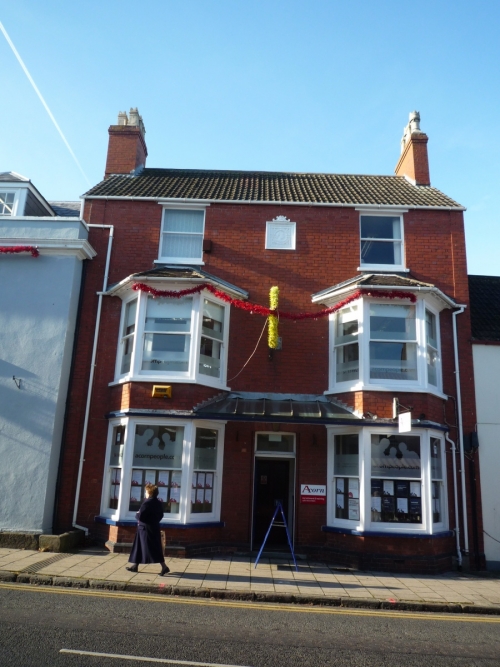 The photograph above shows the distinctive brick building towards the top of the High Street in Thornbury.  Just below the roof-line it has a white plaque which has the date 1897 and shows the profile of Queen Victoria surrounded by an inscription ‘Victoria 60 years Queen of Great Britain and Ireland’ and with ‘Empress of India’ written across.  Around the edge of the plaque it reads ‘Canada, Australia, New Zealand, Burmah, Gibraltar, Malta, Cyprus, Egypt, Africa, W. Indies.’   We believe that this shows that the building was extensively renovated around 1897 but the history of the property can be traced a great deal further back in time.

We are very grateful to Chris and Helen Milne for allowing us to see their wonderful set of deeds which cover the little group of properties in this part of the town.  The earliest record bears the date of 12th October 1576 between Thomas Martyn, butcher and Thomas Holbroke, shoemaker but we are not sure which property it relates to.  However we have an almost complete set of deeds from the late seventeenth century which provides a clear image of how the three properties now known as 36, 38 and 40 High Street have developed.

We will start this history with:

Anthony Horsley – Anthony’s will dated 27th March 1690 (and proved 17th June 1690) shows he was an innholder of Thornbury.  Anthony was the son of James and Cecily Horsley who had run the Mermaid on the other side of High Street.  James left two properties to Anthony: a messuage or tenement and lands situated in the Burrough of Thornbury and which he had bought from ‘Thomas Smith (late Thomas Legge)’ and the lease of a messuage or tenement with orchard, and garden situated in the Borough which he had bought from William Stafford Esq and his son, John Stafford Esq and other Feoffees ‘known and called by the name of ‘Crockers’.

In 1686 Anthony Horsley was Mayor of Thornbury.  In his will, Anthony refers to his ‘two properties within the Borough wherein John Clarke and John Cooke do now inhabit’.  We assume, from the descriptions and family connections given below, that these two properties later became known as 38 and 40 High Street).  In his will, Anthony’s goods and chattels etc were to be shared by his wife, Sarah and daughter, Elizabeth, but he left the two properties to his daughter, Elizabeth.  At the time of Anthony’s death, Elizabeth was still ‘in her minority’ and her uncle, Robert Thurston, was appointed as her guardian together with John Wilkins of Rockhampton.  We note that John Thurston was a witness to Anthony’s will and John also seems to be Sarah’s brother as in John’s will dated 1690 Anthony is referred to as John’s brother in law.  John left Anthony a rapier and a belt and made him an overseer of the will.  John Thurston owned the property later to become 36 High Street.  In Robert Thurston’s will dated 1703 he left Elizabeth ten pounds and ‘one feather bed and bolster in his little chamber over the warehouse’.

On 14th August 1704 Elizabeth Horsley married Phillip Mansell at St Mary’s Church and presumably Phillip then became the owner of the two properties.

Phillip Mansell Jnr – Phillip was a victualler of Thornbury.  He is referred to in several indentures as owning the two properties later known as 38 and 40 High Street.  Phillip born on 15th April 1681, the son of Phillip Mansell and his first wife, Dorothy Stiff.  Read more about the Mansell family

An indenture of 1716 refers to a stable and slaughterhouse, (presumably to the rear of this property) which was owned by John Hewett Jnr which was being used by Thomas Allway who lived next door at 40 High Street.

On 25th October 1731 John conveyed 38 High Street to Thomas Alway.  The property was described as ‘All that messuage wherein Phillip Mansell the younger victualler deceased in his lifetime dwelt & wherein one William Pearce blacksmith inhabiteth situate in the burrough of Thornbury and adjoining to a house late of William Green deceased and now of the said Thomas Allway on the Southside thereof and to a house of John Thurston gent on or nigh the Northside formerly purchased by the said John Hewett of the said Phillip Mansell junior ‘.

Thomas Allway – Thomas was a merchant and a Quaker.  He lived next door at 40 High Street, but on 26th October 1731 he bought 38 High Street from John Hewett, a butcher.

Thomas had married Rebecca Thurston in Thornbury on 19th October 1698.  His will written on 28th May 1746 and proved on 9th September 1748 shows Thomas owned several properties in Thornbury.  He was still living in 40 High Street at the time of his death.  Number 38 was occupied by Elizabeth Williams as a tenant of Thomas’s for some years prior to 1736.

Thomas left his property to his wife, Rebecca, during her natural life.  After her death, 40 High Street and the land and outbuildings behind were left to Robert Wallington, the son of Thomas’s sister, Rebecca Wallington.  Number 38 High Street he left to Susannah Smith and Ann Birt, the daughters of his sister, Rebecca Wallington, for them to dispose of as they wished.  He also gave them the furnace and great water butt standing in that property.  He gave Rebecca Wallington the sum of £100 to be at her disposing by will or otherwise without consent or hindrance of her husband.  He gave the sums of £10 each to Susannah and Ann on the same basis.  He also made several other bequests to kinsmen and servants.

We suspect that the ladies let the house out to tenants for a few years.  We know that their husbands took out a couple of mortgages in which they used the property as a security.  The two families seemed to remain in Chipping Sodbury based on their addresses shown on the mortgage documents.

On 19th February 1756 Joseph arranged a mortgage of £62 with Mrs Sarah Harris of Frenchay.  In his last will and testament dated 26th March 1764 Joseph left to his wife, Rachel Symmonds, all that messuage or tenement wherein he dwelling and all his goods and chattels.  Rachel was listed as living there in the 1770 Assessment of Poor Relief.

Solomon Smith – on 1st June 1772 there was a Deed of Gift of a messuage from Mrs Rachael Symmonds to Mr Solomon Smith Jnr.  Solomon was another schoolmaster and Rachel’s nephew.

The messuage was described as ‘wherein Solomon Smith doth now inhabit in High Street adjoyneth to a house lately in possession of Rebecca Allway deceased but now of George Rolph on South side and to a house formerly of John Thurston deceased but now of Ann Caddy on or nigh the North side’.  At the time of the conveyance there was £40 plus interest still outstanding on a loan from Sarah Harris who had since deceased.  In 1772 this mortgage was transferred to Miss Hester Hollester, spinster of Henbury who paid £46 (capital and interest) to Sarah Harris’s executor, Webb Davis, a wine cooper from Bristol.  Solomon Smith borrowed a further £24 from Hester Hollester.

We know from other indentures dated 1773 that Solomon Smith Junior was the son of Solomon Smith the Elder, a yeoman.  These deeds related to a piece of land known as the Burnthouse Orchard.

The Rolphs – on 28th & 29th September 1774 there was a Lease and Release in which Solomon Smith the younger schoolmaster which conveyed the property to George Rolph the younger, gentleman.  The messuage described as ‘wherein Solomon Smith lately inhabited & wherein Mary Trayhurn widow doth now dwell adjacent to a house since

of Thomas Allway but now of George Rolph the Elder (father of George Rolph the younger) on South side and to a house formerly of John Thurston but now of Ann Caddy on North side Part of which tenement is now used by Solomon Smith for a schoolroom.’  Release £18 15s paid to Solomon Smith.  We were thrilled to find this set of documents included a plan showing the extent of the purchase with details of who owned the adjoining properties.  Click on the thumbnail on the right to see this plan.

At the time of the conveyance in 1774 there was £76 8s outstanding on the loan from Hester Hollester and this was paid off by George Rolph.

The house became the home of Sarah Rolph, the wife of the late George Rolph the Elder.  She died on 21st February 1823, but she appears to have moved elsewhere by some time before the time of the 1809 Rent Roll, when John Bevan is said to have been living there.  John is still shown as living there in the 1830 Rent Roll.

At the time of the 1840 Tithe Survey the property was owned by George Rolph and occupied by John Smith.

According to George’s will dated 10th July 1840 John was a plaster and tiler.  George died on 23rd April 1841.  At the time of his death he was living at 40 High Street and he left that house and 38 High Street to his sister, Susannah.  In the 1841 census Susannah is shown as living at 40 High Street.  She didn’t remain long.  A legal notice following her death mentioned that she had lived at 20 Hemus Terrace, Chelsea.  The 1851 census shows her visiting Thornbury and staying with Charles White, a plumber and glazier who living at 26 High Street.  Click here to read more about the Rolph family

The Rolphs let 38 High Street to tenants including:

On 15th October 1862 Susannah Rolph sold her two properties in the High Street (38 and 40 High Street) to Mr Obed Edward Thurston including the garden and outbuildings at the rear.  The indenture shows Susannah was living now at 8 Pembroke Place, Clifton.  She died on 28th May 1866 whilst living at 9 Victoria Place South, Clifton.

The property continued being used as the office for the solicitors until the 1950’s, maybe even longer, operating under various names including Thurston & Jolly, Thurston, Jolly and Burbridge, Thurston Burbridge and Mills and and Thurstons & Co.  We ‘re not sure what connection there was between the firm and the Thurston family following the death of Henry Privett Thurston in 1918.  His brother, Lawrence Thurston Thurston is listed as a solicitor in 1897 trade directory but after that he is listed as a farmer or just as living in Kington House.  In the 1960’s the Thurston firm went into partnership with Crossmans based in their office at 12 The Plain.

We do not know when the Thurstons office at 38 High Street closed and who occupied the property after that time.  The next business we can remember is ‘J.L. Bureau’ a secretarial bureau.  They were there in 2000.  Len Smith the insurance agent was also based here for a while and the Redcliffe Removal Company also show this as their address.  The offices are now occupied by Acorn Recruitment Agency.