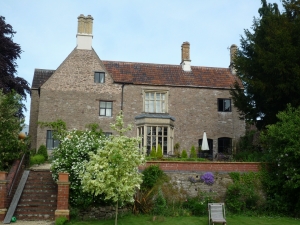 View from the west

The Close House is a very distinctive house set back from Thornbury High Street in the cul de sac known as The Close.  A footpath leads from The Close to the Mundy Playing Fields.

The house has presented something of a challenge because although the house is clearly very old, the deeds in the possession of the current owners only go back to about 1900.  We are extremely grateful to Ros and Fergal Monsall for showing us around their property and for drawing to our attention the various features of the house.  The oldest part of the building is at right angles to the High Street (the gabled part on the left of the above photograph).  Whilst we do not have any expertise with regard to the dating of structures and are not able to comment on its likely age, the Monsalls have been advised that parts of it could date back to the Tudor period.

Another of its owners Richard Vivian Meyer has told us that he believes that this house was a Chantry.  He says he has in his possession a pen and ink drawing of what the house might have looked like at that period.  He understood that monks lived in this property at one time. 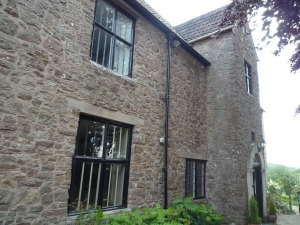 According to their website, English Heritage believe that the old building was constructed in the mid 17th Century and extended in the 19th Century.

The house today is blessed with a wonderful terraced garden overlooking the Mundy Playing Fields with views down to the River Severn.  It is interesting to note that on the 1840 Tithe Map the house had very little garden and the fields came up close to the house.  By 1881 the garden had been extended a little, but it was only later (before 1903), that it was made into it current size.

The 1881 map suggests that the coach-house and stable on the opposite side of the footpath to Kington was still part of The Close House property.  Horse-drawn coaches or traps must have driven through the main gates of the house and then turned right through the gap in the wall and across the footpath to reach the coach- house.  The gap is the wall is still clearly visible but now walled in.

We knew from the deeds we had seen that the property had been owned by the Osborne family and descended to the Maclaine family.  We have written about the these families on a separate webpages.

The deeds showed that amongst the early tenants was a lady called Temperance Jane Willis and that the house adjoined the land called the ‘Home Close’.  The earliest reference to the property we had seen was in a document dated 15th July 1776.  This showed that the house was then owned by Mrs Martha Osborne and was occupied by her widowed daughter, Martha Cullimore.

These references have subsequently enabled us to trace other records in Gloucester Records Office which clearly relate to the same property:

In 1822, following the death of Grace Osborne, Hector Maclaine and his wife Martha attended the Manor Court to claim Grace’s property, in accordance with the last will of Martha’s father, William Osborne, dated 22nd August 1807.  In this will William left his property to the use of his wife, Grace during her lifetime and then it would be left for Martha.  The property was described as ‘all that customary messuage or tenement with the appurtenances wherein Martha Osborne heretofore inhabited and Martha Cullimore widow afterwards dwelt and Elizabeth Osborne spinster since dwelt and William Millett lately inhabited and Ann Hardwicke widow afterwards dwelt and Temperance Jane Willis doth now dwell and one close of pasture ground called the Home Close containing by estimation 14 acres (be it more or less) and one close of pasture ground called Wellfield containing by estimation 8 acres etc‘.

The last will of William Osborne written in 1807 referred to lots of property around the area and to some in Monmouthshire.  However he left for the use of his wife, Grace, subject to her not re-marrying, “all that customary messuage or tenement with appurtenances wherein my late mother Martha Osborne widow deceased heretofore inhabited and my sister Martha Cullimore widow afterwards dwelt and my aforesaid late daughter Elizabeth Osborne afterwards to and at the time of her decease inhabited and (blank) Millett doth now dwell, one close of pasture ground called the Home Close containing about 14 acres one close of meadow or pasture called Great Wellfield containing about 7 acres etc“.

On 3rd August 1787, following the death of Martha Osborne, William Osborne attended the Manor Court to claim her property.  This was described as ‘one customary messuage or tenement with the appurtenances wherein the said Martha Osborne formerly inhabited and wherein her daughter Martha Cullimore widow doth now dwell of one close of pasture ground called the Home Close containing by estimation 14 acres (be it more or less) of one other close of pasture ground called Wellfield containing by estimation 8 acres etc.

Thus we know that between the period of 1776 and 1787 the house owned by Mrs Martha Osborne was occupied by her widowed daughter, Martha Cullimore.  A look at the Kington land tax for 1780 through to 1785 shows that the house owned by Mrs Cullimore and occupied by Martha Cullimore was referred to as ‘for Greenfields’.  In the land tax records of this period it was commonplace to refer to a property by the name of the previous owner.  The Assessment list for Poor Relief in 1769 shows ‘Martha Osborne for Greenfields’.  The Manor Rent Roll for 1737, 1738 and 1754 show that William Osborne was responsible for the property ‘for Greenfields’.  The rental due in each of these records was 6/6d at Lady Day and 6/3d at Michaelmas.

Looking back further we find in the 1727 Manor Rent Roll ‘Mrs Mary Greenefield’ owning a property with the same rental value of 6/6 and 6/3d.  Thus we know that William Osborne must have acquired the property from Mary Greenefield between 1727 and 1737.

We have been unable to find out about Mary Greenefield (or Greenfield).  We note that there was a Hugh Greenfield listed in the Manor Rent Roll of 1753 and in the Poor Assessment Records of 1769 and 1770.  Also in the 1696 Tithe Terrier a Mr Greenfield owned the land known as Great Wellfield and Silcock’s Close and that John Barton owned the land known as The Close which was in the same area – described in the listing as ‘Item one ground belonging to John Barton called the Close reputed to be in the tything of Kington by estimacon about four acres bounded North by the aforesaid close of Mrs Tayers, East by the gardens of the Burrough of Thornbury and South and West by Mr Greenefields Silcock’s close’.  It is possible that it was John Barton who was the owner of The Close House at that time and we will be pursuing this line of research.