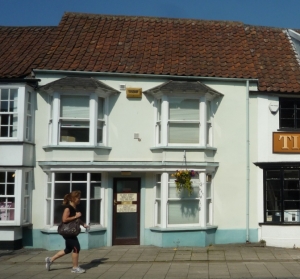 We haven’t seen the deeds to this house, but we know from the deeds of other properties in the row that it is likely to be very old.

Our earliest sources, the Land Tax records from 1775 to 1800 show that the property was owned and occupied by Joseph Hudd.  Joseph was a cordwainer married to Susannah.  She died aged about 44 and was buried on 25th May 1773.  We know from the last will of William Clark dated 1799 that Joseph Hudd had lived in the house which became two houses known as 37 & 39 St Mary Street.  Joseph had sold the property to William Clark, presumably before he moved to 46 High Street.  In 1782, Joseph’s son, Jonas was killed in an accident when a meat cart overturned.  He was just 17.

We don’t know when Joseph died, but we assume that the property passed to his daughter, Hannah.  She had married Anthony Parkhouse on 25th May 1806 and the 1809 Rent Roll and 1809 Land Tax records show that the house was owned and occupied by Anthony Parkhouse.  Anthony died in 1811 and subsequent records up to 1832 (the last we have seen) show the house was owned and occupied by Hannah Parkhouse.  In 1834 in common with most other Thornbury traders Hannah, as a grocer, was charged with having three defective weights.  She died in 1836.

Like most other properties in Thornbury the house was not always occupied by the owners and they often let it out to tenants.  We have restricted this webpage to cover the owners of the property.  Click here to read about the people who occupied the house as tenants.

We have copies of notes made from an abstract of title for the property.  The section of the abstract refers to the property in the 1890’s as being ‘All that messuage formerly belonging to Thomas Dowell then William Gabb since Charles Edmonds, then Edmund Edmonds, then Harris Harris Collings and then said Ann Collings on the west side of a street called High Street, formerly in occupation of Ann Harris Collings, since of Thomas Bros shoemakers and then void‘.

We have been able to confirm and add to much of this information from other sources such as the census and rate book records.  However, except for an entry in the Tithe Survey which shows that someone called ‘Gabb’ was the owner of this property at that time, we have been unable to find any other references in Thornbury records to Thomas Dowell, William Gabb and Charles and Edmund Edmonds.  We suspect that they may not have lived in Thornbury.  There is also the possibility that they may have been related and that the property was passed from one to the other.

The reason for this speculation is that there is a record of Thomas Dowell, a mariner in Berkeley who had a daughter called Rebecca baptised in Berkeley on 9th September 1810.  We discovered that a Rebecca Dowell married William Gabb in North Nibley on 16th August 1836.   Thomas Dowell died in Berkeley aged 75 and was buried on 1st March 1840.  The Bristol Mercury of March 7th 1840 obit says “At Berkeley suddenly Mr Thomas Dowell coal merchant.”  This might explain why Thomas’s property was passed to William Gabb or it might be that it was a different Thomas Dowell.

We have also discovered a possible link between the Gabbs and the Collings family.  In 1842 Harris Collings married Harriett Gabb in the Chepstow area.  Harriett was born in Framilode near Frampton on Severn in Gloucestershire.  She was born on 3rd May 1813 and christened on 25th May 1813 at the Independent Chapel, Frampton.  Although William and Harriett were possibly related they were not siblings as Harriett’s parents were John and Ann Gabb.

The Bristol Mercury dated June 18th 1842 has a list of Insolvent Debtors.  One of these is ‘William Gabb late of Berkeley in the county of Gloucester part of the time general shopkeeper and part of the time in co partnership with Charles Dowell at Berkeley aforesaid as Halliers and Coal-Merchants and the remainder of the time a Licensed Victualler and Coal Merchant of the same place’.

The Edmonds – we can’t find anything in Thornbury records to identify the Charles Edmonds or Edmund Edmunds mentioned in the above abstract.  The 1859 an 1867 Rate Books say that the house was then owned by Henry Edmonds.  Again, we can find nothing specific to identify Henry.  We note that there is a Charles Edmunds who was in the employ of Thomas Henry Honeyborne at The Anchor, Morton when he was burnt to death in his cottage at Morton.  However we don’t know that this is the same Charles Edmonds.

The Collings – we don’t know when or how Harris Collings acquired the property, but on 14th June 1871 it was put up for auction with other property he owned.  It was described as ‘a freehold messuage or dwelling house in the High Street near the new Railway Station about to be erected, consisting of a shop, parlour, three bedrooms and kitchen etc and small garden.’

Harris had a varied career, starting off life as a clockmaker and then a silversmith and pawnbroker, and finally a publican at the Black Lion in Thornbury.  Click here to read about Harris Collings.  We don’t know what happened at auction, but Harris died shortly after on 4th July 1871.

The 1876 and 1880 Rate Books show the owner and occupier of the house to be Harris Collings’s sister, Ann Harris Collings.  Ann was baptised on 26th November 1816, the daughter of Samuel Collings, clockmaker and his wife, Elizabeth (nee Harris).  She never married.  In the 1861 census Ann was a nurse in the service of Wilberforce Leonard, an attorney and solicitor living at 2 Pembroke Villas, Clifton.  At the time of the 1871 census Ann was in service in Knightsbridge, London.  She was a nurse working for Albert G Sandeman, a merchant trading with Portugal and Spain.  The 1881 census shows Ann living there as an unmarried shopkeeper aged 69 from Thornbury.

Ann died on 15th May 1890.  In her will dated 9th May 1890 she devised the property to her brother, Samuel Collings a watchmaker living in Cowbridge, South Wales.  Samuel is shown as the owner in the 1894 and 1899 Rate Books.  At some time after this, the abstract of title shows that Samuel Collings sold it to Ellen Jones of High Beech, Thornbury for £130.

The Jones – Ellen Jones (aka Ellen Taylor) was born in Thornbury in 1856.  She was brought up living at 63 High Street with her parents, and then with her brother, Frederick.  The 1905 Rate Book shows that ‘F. Jones’ had also bought 46 High Street, but the 1910 Rate Book and an Abstract of Title says that it was Ellen Jones who owned the property.  When her brother died in 1914 Ellen became the owner of his property on the east side of the High Street.  Click here to read about Ellen’s earlier life

We don’t know when Ellen moved across the street to live at 46 High Street.  At the time of the 1911 census the house appears to be unoccupied.  Ellen sold the two houses (61 and 63 High Street) at some time between 1918 and 1920.  The 1925 Valuation list shows the two houses were owned by W. H. Phillips and Ellen Jones was living in 46 High Street.  She continued to live at 46 High Street.  Ellen died under the name of ‘Ellen Jones-Taylor’ on 19th July 1941 aged 86 years.  In her will dated 11th November 1925 she left her property to her niece, Gertrude Eleanor Mary Maffia of Monmouth.  Gertrude had married Frederick Collins Williams in Wandsworth on 9th June 1926.  By 1941 Gertrude was living in Monmouth when she sold Ellen’s house in Thornbury to Alfred Knowles for £350.  The house had been put up for auction on 17th October 1941.  It was described as ‘a freehold, double-fronted house which was stone-built, rough cast front, and contains five rooms.  Company’s water, main drainage.  The decorative repair is good.  Let at 8 shillings per week inclusive to Mr A Knowles‘.

Alfred Knowles – Alfred bought the house in 1941 for £350 and he and his wife lived there until their deaths.

Alfred was the son of William Knowles.  Alfred had moved to Thornbury in the late 1930’s.  He was a widow who had been working previously in the cotton trade in Lancashire.  In Thornbury, Alfred became a window cleaner.  In 1938 he was living at 7 Upper Bath Road.  On 24th July 1939 Alfred married Mabel Violet Clutterbuck, the daughter of James William Clutterbuck, a retired postman.

On 21st April 1951 the house was sold for £1500 to Alan Peter Humphreys & Miss Sharon Christine Gorman, both of Cardiff.  (They subsequently married on 7th September 1964).  The 1954, 1958 and 1961 electoral registers show the house was occupied by William S. and Hannah A. Simpson.  The 1965 register shows that the Humphreys were living there.  In 1967 they sold the house for £2500 to John Gillespie of ‘Nettlestone’ Vicarage Lane, Olveston and Keith Oldham of ‘Carmel’ Gloucester Road Thornbury.  We believe that they may have had a dental practice there.  On 3rd December 1979 they sold the property to Stuart Philip Chadwick and it has been used ever since as The High Street Dental Practice now run by Stuart in partnership with Ahsan Gaffori.

Click here to read about the other OCCUPANTS of the property