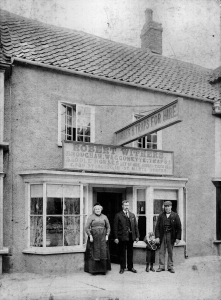 Some of the owners of this property in Thornbury High Street also lived there.  Click here to read about the OWNERS of the property

This page details the various people whom we know to have occupied the house of  as tenants.  The photograph above shows the house in the early 1900s with its tenant at that time Robert Withers (see below).

Ann was the widow of Charles Gayner, a baker.  Their children and grandchildren played important parts in the life of Thornbury High Street.  Click here to read more

The Slys – the 1851 census shows that the house was occupied by Richard Sly, a common carrier aged 57 from Horsington, Somerset.  He was living with his wife, Sarah aged 52 from Rugby, their two children: Elizabeth, a straw bonnet maker aged 20 born in Olveston and Ann who was described as ‘At home’ aged 14, and Richard’s brother, James, a retired brewer, unmarried and aged 52, also born in Horsington.

The Slys had moved to Thornbury by 1837 when their daughter, Sarah Hannah, was baptised on 18th April 1837 and Richard was described as a brewer.  The 1841 Census shows Richard living in 8 Upper Bath Road.  He was described as a brewer aged 45, living with Sarah aged 40 and their children: Elizabeth aged 10 and Anna aged 4.  Richard’s brother, James was listed as a brewer living in 14 Rock Street which is where Richard and James did their brewing.  By 1844 James had vacated the Brewery.

In 1858 Elizabeth became involved in a dispute which gained national newspaper coverage.  Click here to read more about the dispute over the church pews

Richard died aged 67 on May 2nd 1860 “at his residence”.  According to the Western Daily Press of May 3rd 1860 (which described him as the father of the notorious Miss Sly”) he rose at 5 a.m. to “pursue his accustomed duties” and fell down in the doorway and expired ten minutes afterwards.  He was buried on 6th May 1860.  The 1861 Census shows the house was occupied by Elizabeth now a straw bonnet maker and milliner and her mother, Sarah, a widow aged 60 (who was described as a ‘boarder’).  The 1869 Rate Book shows Elizabeth was still living there.

In 1871 Sarah and her two daughters were living in Silver Street.  Sarah was described as a pauper aged 74 and Elizabeth as a straw bonnet maker aged 40 and Sarah Ann as a ‘living from ‘allowance from grandmother’ aged 34.

The Minute Books of Thornbury Union have been partly transcribed by Tony Cherry and Alan Thoburn who may have found a clue as to a problem that arose in the Sly family in the early 1870’s.  On the 29th December 1871 Mr Sainsbury reported that his attention had been brought to two young women named Sly who were of unsound mind caused by drinking.  The Relieving Officer was directed to mention it to the police and if it became necessary to give notice of them to the magistrates.  We do not know whether this was Elizabeth and Sarah Ann Sly and if so whether this was the reason why they were living on their grandmother’s money.  However we do know from later Minute Books of Thornbury Union that Elizabeth Sly eventually became an inmate of Gloucester Lunatic Asylum.  On 1st May 1874 a letter from Elizabeth Sly, an inmate of the Gloucester Lunatic Asylum, requested emigration to the colonies.  The request was turned down.  On 8th May 1874 a letter from Mr Toller, Superintendant of the Gloucester Lunatic Asylum, stated that Elizabeth Sly might be discharged on trial if arrangements could be made for looking after her.  The Relieving Officer No.1 was instructed to find a suitable place where Elizabeth Sly might be taken care of whilst on trial.  Mr Toller was to be informed of progress.  In June of that year Mr Toller stated he would obtain the Order for the discharge of Elizabeth Sly and requested she be collected.

Elizabeth’s sister, Sarah Ann died aged 39 and was buried on 1st June 1874.  In July a letter was read to the Board of Guardians that was from Mr Samuel Sly of Wincanton regarding the case of Elizabeth Sly lately discharged from Gloucester Lunatic Asylum on trial and requesting the Board to inform him of the result.  Sadly, in March 1875 the Gloucester Union stated that Elizabeth Sly (late of Thornbury) had become chargeable to that Union and was likely to be returned to the Lunatic Asylum.

We don’t know what happened to Elizabeth, but it does not seem she had a happy life.  In 1891 she was a ‘ lunatic’ in the County Lunatic Asylum at Wootton St Mary.

John West – the 1891 Census shows the house was then occupied by John West, a grocer’s porter aged 42 from Bristol.  He was living with his wife, Harriet, aged 43 from Thornbury and their son, Albert who was aged 10 having been born in Bristol.  The 1881 Census shows John was a bargeman living in 5 Woburn Place, Clifton.  He and Harriet had two children: John aged 7 born in Thornbury and George aged 5 born in Clifton and baby Albert.  [/fusion_builder_column] 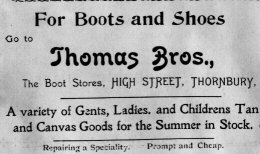 James Thomas – the 1894 and 1899 Rate Books show the house was owned by Samuel Collings and occupied by James Thomas.  We assume that this is James Thomas who ran a shoe shop with his brother, Frank under the name of ‘Thomas Brothers’.  The 1901 Census shows them both running their shop at 53 High Street.  By 1905 they had moved to the shop on the corner of High Street and Soapers Lane (later known as 37 High Street) but in the 1910 Rate Book James’s name is crossed through and replaced by ‘Huins’.

Frank and James were the sons of Theophilus Thomas a gardener and his wife, Jane.  Frank was baptised in Rockhampton on 4th December 1870 and James on 18th May 1873.  The 1881 Census shows the Thomas’s living at Rockhampton Wheel.  The 1891 Census shows James had moved to live in 51 Marlborough Street, Bristol.  He is described as a ‘Stay Trade Blocker’ which appears from the other people in the household to be connected in some way with the boot and shoe trade.  Meanwhile his brother Frank was a groom in Lewes in Sussex.

Frank married Rose Sollis in 1902.  They had three daughters, Doris May, who was born in 1903 but she died on 2nd October 1903 aged 4, Lilian Rose born in 1905 and Muriel Bessie born in 1908.  The 1911 Census Rose was listed as being at 37 High Street with her sister, Ann Sollis aged 23, both born in Chadlington in Oxfordshire and Lilian and Muriel.  Frank was a patient in a hospital for consumptives, Winsley Sanatorium at Limpey Stoke near Bradford on Avon.  Frank died on 28th May 1911 aged 40.

The Withers – the 1901 Census shows the house was occupied by Isabella Withers, a widow aged 65 being ‘supported by her children’.  Her daughter, Elizabeth was living in the same house – she was a dressmaker aged 25.

Isabella was born in Alveston, the daughter of Robert Tovey and his wife Mary (nee Minett).  She was the widow of Thomas Withers who was born in Falfield about 1825.  On 17th September 1853 Thomas married Isabella Tovey at St James, Bristol.  The 1861 Census shows Thomas was a plasterer and he and Isabella were living at Crossways with their two children: Thomas aged 2 and Frederick aged 1 who were both baptised on 5th August 1860.

The 1881 Census shows Thomas was a plasterer and tiler and son, Robert Withers aged 14, had become his apprentice.  The eldest daughter in the household Caroline was aged 16 and had no occupation.  The other children, Sidney, Elizabeth and Daniel were still at school.

The 1891 Census shows the family still in Crossways.  Their son Thomas was at home working as a stone mason, Robert had changed his work to become a gardener, Elizabeth was an apprentice dressmaker and Daniel was a general labourer. 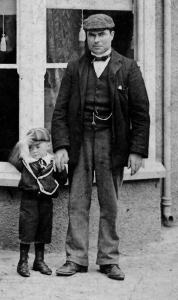 Robert Withers – for a short period around 1900 Robert was living in the Castle Coffee Tavern (later known as 57 High Street).  The 1901 Census shows that Robert Withers was living at the Castle Temperance Hotel with Caroline Elizabeth Butler who had recently taken over as manager of the Coffee Tavern following the death of her husband in 1899.  Robert and Caroline had one son, Charles born in June quarter 1901.  Charles’s birth certificate records the birth of Charles Withers to Robert and Caroline Elizabeth Withers (late Butler, nee Bevan).  However Robert and Caroline were not married, as after Caroline committed suicide on 11th September 1901 the name on her death certificate was Butler not Withers.

The 1905 Rate Book shows that Robert Withers was renting 46 High Street from F. Jones.  He had presumably taken over the tenancy after the death of his mother.  We know from photographs and trade directories that Robert ran a business as a coach proprietor, hiring traps.  Initially Robert lived at 46 High Street and used the coachhouse and stables on St Mary Street at the rear of 53 High Street which he had acquired by the time of the 1900 Rate Book.  The photograph on the left is a thumbnail image of Robert Withers with his son Charles standing outside 46 High Street.  Please click on the image for a larger photograph.  By 1910 Robert had acquired 53 High Street and moved across to live there.

The Kings – the 1910 Rate Book shows that the house had been occupied by Charles King, but his name had been crossed out and replaced by Selina King.  Charles had been an ironmonger and tinplate worker whose premises had been at 23 High Street.  Read more about the Kings

Click here to read about the OWNERs of the property, many of whom also lived there.