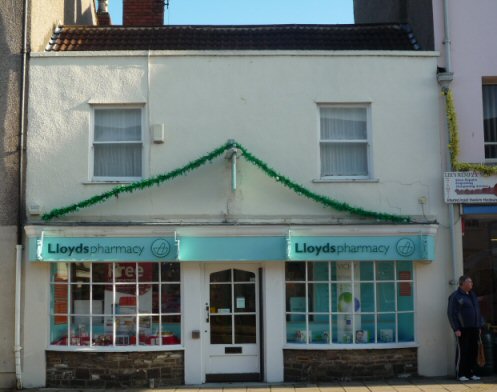 Unfortunately we haven’t seen the deeds to this property.  Our knowledge is based on snippets of information shown in the deeds of the adjoining property, 49 High Street, supplemented by our usual supply of census records, rate books, newspapers etc.  We would love to hear from anyone who can add to what we have written about the property.

From the documents we have seen relating to this property and those of 45 High Street this was garden and orchard land in the early 1700’s.  It appears that there was a large orchard extending from the High Street through to St Mary Street and stretching from the boundary between 47 and 49 High Street down the street for several plots.  We don’t know precisely the area covered but in one document it refers to it being bounded by the ‘burnt alms houses’ which we believe to refer to be the houses later known as 8 and 10 St Mary Street.  We know that this orchard was owned by the family of Robert Thurston the elder but we note that the documents of 49 High Street refer to ‘The Old Garden’ which was in the rear of this property.  This land was owned by Edward Parker, but may well have been part of an even larger plot of land at an earlier time.

Our detailed knowledge of the property starts with the 1840 Tithe Survey.  This shows that the property was Plot 162, a house and garden owned by James Ford and occupied by James Jones.

James Ford – the 1840 Tithe Survey shows that the property was owned by James Ford. James also owned the property door at 49 High Street which he had acquired from George Rolph in 1824.

We assume that James was the same person who also owned several others properties in Thornbury around that time and we hope to be able to pull together all the knowledge we have of him in the future.

James Jones – the 1841 Census shows James Jones was a surgeon aged 25 living with his wife Amelia aged 25 and a servant Ann Taylor aged 15.  It seems like Amelia died shortly after this census as James re-married in Bedminster in 1847.  His second wife was Charlotte, the daughter of Joseph Laver and his wife, Louisa.  Click here to read more

William Hurd – the 1851 Census shows William Hurd is now occupying the property.  William was a tailor aged 40 born in Slimbridge.  He was living with his wife Hester aged 50 and daughter Jane aged 18.  Mary Trayhurn was listed as a visitor aged 35 and described as being a servant ‘out of place’.  On July 5th 1854 their daughter Jane died and was buried at St Mary’s Church in Thornbury.  The 1861 Census shows that William and Hester were still

living at 47 High Street.  In this census he was said to be 48 and she was 67.  He was a tailor and draper employing two men.  By the time of the 1862 Rate Book William had moved to 55 High Street.  Click here to read more

George Chambers – the 1859 Rate Book shows George was the owner of the property and the 1861 Census shows that George and his family had set up home there.

George was born about 1812.  He was one of the four sons of William John Chambers and his wife, Sarah (nee Taylor).  The others were called John, William and Edward.

The 1841 census shows George was a servant working and living at the Vicarage.  He was aged 30.  Amongst the other servants was a 13 year old girl, Sarah Boulton.  She became George’s wife, eight years later.  On 10th September 1848 George married Sarah Longling (or Longden) Boulton.  George was working as a servant at the time of the marriage.  Sarah was baptised on 30th December 1827, the daughter of John Boulton, a labourer and his wife, Elizabeth.  George and Sarah had two children: Lucy baptised on 21st February 1849 and Augustus Patrick baptised on 9th October 1850.  We haven’t been able to trace the family in the 1851 Census.

The 1859 Rate Book shows George had become the owner of 47 High Street.  The 1861 Census shows George and the family were living in that house.  George was a grocer aged 50 born in Alveston, Sarah was aged 35 born in Thornbury with Lucy aged 12 and Augustus P aged 11.  James Greenham a photographic assistant aged 27 from Bristol was sharing the house with the Chambers family.

The 1871 Census shows George was a grocer aged 60 living with Sarah aged 42 and Lucy aged 22 and a lodger, Hannah Thomas an annuitant aged 63.  On 1st January 1872 Lucy married John Taylor Chambers, a Professor in Music and the son of William Chambers a shoemaker.

George died on 19th April 1875 aged 63.  Their son, Augustus was ‘slain’ at Isandula (Isandhlwana) in South Africa on 22nd January 1879 aged 28.  He was a Lieutenant with the Natal Native Contingent at the time of his death fighting in the War against the Zulus.

Sarah died on 25th December 1896 aged 69 and she was buried on 28th December 1896.  The transcription of Sarah’s last will shows her middle name as ‘Longling’.  In the will, Sarah left her property to her daughter, Lucy, and her husband during their lifetimes and then to their two sons.  The rate books from 1899 show that the property was passed to their daughter’s husband, John Taylor Chambers.  He continued to be the owner up to the 1910 Rate Book and probably up to the time of his death in 1924.  The 1925 Valuation List shows ‘M. Chambers’ as being the owner of the property – this would have been John’s son, Maurice Chambers.  It appears that Maurice sold the property to Edward James Underhill who was married to his second cousin, Lucy, and they had both been living in the property since at least 1899.

Edward James Underhill – the 1899 Rate Book and the 1901 Census shows he was a solicitor’s clerk aged 32, living with his wife, Alice B a draper and dressmaker aged 36 from Wellington in Somerset and their three children: Winifred A aged 9, Frank A aged 5 and Lucy A aged 9 months.

Initially Edward was a tenant of John Taylor Chambers, and then his son, Maurice Chambers.  By 1926 he had become the owner of the property.  Edward died in January 1928 aged 59.  Alice died in August 1933 aged 69.  Click here to read more

Dennis Edward Beszant – Dennis and his family moved to 47 High Street from their home at 73 High Street.  We are not sure when they moved.  They were living at 73 High Street in 1926 Rate Book and in 1930 when their son, Kenneth, started at Council Upper School, although at that time the house was known by the address of ‘5 High Street’ when this row of houses were numbered from the top of the town.

Dennis Edward was born in Thornbury on 6th January 1892.  His parents were Charles Reginald Beszant, a dairyman and his wife, Martha who were living at Upper Sibland Farm, Crossways.  In his earlier life Dennis helped the family both on the farm and delivering milk around the area.

In August 1914, right at the beginning of the War, Dennis enlisted and joined the Royal Field Artillery as a Gunner on 1st September 1914.  He was described as a milkman aged 22 years 7 months on enlistment.  He was 5ft 8 ½ in, 119 lbs with chest 34 inches with 2 ½ inch expansion, dark complexion, brown hair, brown eyes and a mole on right side of face.  Dennis was extremely fortunate to survive the whole war.  He was promoted to Lance Bombardier in 1915 and to Bombardier in 1916.  He was finally discharged in March 1920 having served two years in Egypt, four months in the Dardanelles, 18 months in Salonika and five months in France.  The records show that in 1917 Dennis suffered from malaria ’caused by climatic conditions and bad water’ and that he was invalided home from Malta in 1918.

In 1919 Dennis married Florence Eva Palmer in the Bath area.  Florence was born on 29th May 1891.  They had at least two sons, Reginald Ernest born on 4th November 1920 and Kenneth Sidney born on 3rd December 1923.  The 1921 electoral register shows Dennis was living in Sibland.

One local recalls that Dennis had a small dairy at the front of the house.  A large brown bowl with a white interior contained the creamy milk and copper half pint and pint measures were hooked over the bowl.  It was a ‘bring your own jug’ service and he also sold cream.  Dennis also had a milk float and pony and ran an early morning, local delivery service.  Notes held by Thornbury Museum suggest that Dennis may have run an ice cream cafe at the shop for some of the time.

In 1935 the Gazette carried a report of the sad death of Reginald Beszant aged only 14.  He died on 22nd August.  At that time his parents, Dennis and Florence, were said to be living in the High Street.  Reginald had died following an operation at Bristol Royal Infirmary for appendicitis.  Reginald was described as an excellent swimmer, a member of the cricket team and a promising footballer being a member of the Crossways Rangers Football Club.  For several years he had been a member of the Thornbury Church Choir.  Six fellow pupils at Thornbury Grammar School acted as bearers at his funeral.  He was buried in Thornbury Cemetery on 26th August 1935.

The Beszants carried on at 47 High Street until the early 1950’s.  The 1954 electoral register shows they had moved away from Thornbury.

Their son Kenneth married Winifred Andrew in Thornbury in 1947.  They settled in Lydney but later moved to live in Gloucester.

Of Dennis’s children: Ken attended Thornbury Grammar School and then was employed by BAC for about a year.  He then helped his father on his milk round before he joined RAF in 1943.  Ken was a member of the Thornbury Operatic Society and in 1938 he played the part of Luiz in the war-time production of San Merino at the Cossham Hall.  He went out to Florida, USA for training and gained his ‘wings’ in Summer 1944.  He was a keen footballer and cricketer and was one of the first to join the ATC where he rose to rank of Flight Sergeant.  On the left we have the photograph of Ken that accompanied an article in the Gazette about him.

The Tippetts – the 1954 and 1958 Electoral Registers show that Nicholas James H and Joan Frances Tippett were living at the property.  Nicholas was born in Weymouth area in 1910.  In 1937 he married Joan F Wood in Newton Abbott.  We think Joan was born in the Bath area in 1915.  They had four children: Roy W born in 1939, Richard J born in 1945, Christopher F born in 1948 and David N born in 1951.  The births of the first three were registered in Totnes and David was registered in St Germans.

The Tippetts seemed to move away from Thornbury as they were not listed in the 1961 electoral register.  Nicholas died in the Bideford area in 1977 aged 66.  Joan Tippett died in Bristol area in 1984 aged 69.

The Meechs – the electoral registers from 1961 to 1970 show the property occupied by Dennis H Meech and Lilian P Meech.  We don’t know much about them.  Dennis was born in the Bournemouth area in 1927.  He married Lilian P Grey in that area in 1950.

We know that the Meech’s were living in the property when it traded as D Ivel Rees.  Programmes for the Thornbury Flower Show in 1961 and 1962 show the company traded there as chemist and ophthalmic opticians. It was  one of the chain of shops run by David Ivel Rees who appears to have lived in Wotton Under Edge.  This firm was dissolved in 1999.   We do not know if Mr and Mrs Meech managed the shop or simply lived in a flat over the premises.

In 1995 the chemist shop was trading under the name of Dewani’s.  We have a plan showing the shop was ‘Hills, the chemist‘ for a while but the shop was taken over by Lloyds Pharmacy, one of two in Thornbury and one of over 1600 in the national chain.  This branch closed in 2018 and was replaced by ‘C The World‘ an independent travel agency.