This page shows brief details of the various families who are known to have lived in the house that became 54 High Street in Thornbury as tenants.

John Iles – the 1797 land tax record shows John was the tenant of the house.  Click here to read more about John

The Mullingtons – the 1800 land tax record shows the house was occupied by Grace Mullington.  We don’t know anything about Grace.  When the house next door was sold on 8th March 1802 this house was occupied by Isaac Morgan Mullington and he was still noted as being there in another legal document relating to next door dated 15th January 1805.  We assume that Isaac may have been Grace’s son, he might have been related in some other way.  Click here to read more

William Williams – the 1887 Rate Book shows that William Williams had just moved into the house as tenant of Caroline Parfitt.  The 1891 census shows the house was occupied by William Williams a retired farmer aged 77 and his wife, Phoebe aged 78 who was born in Olveston.  Phoebe whose maiden name was Woodruffe had been married previously to James Collard.  She inherited two houses in Castle Street, numbers 36 and 38.  Click here to read about William and Phoebe Williams.  William died on October 22nd 1892 aged 80 and was buried in Thornbury Cemetery.  The 1901 census shows Phoebe was still living at 54 High Street, sharing the house with another widow, Harriett Williams (see below).  Phoebe died 4th September 1905 aged 92.

Mark Williams – the 1894 Rate Book shows Mark was renting the property from Caroline Parfitt.  Mark was a retired blacksmith.  He died on 30th August 1899 aged 83 and was buried in the graveyard at St Marys Church.  His wife, Harriett continued to live in the house.  She was there in the 1901 census, apparently sharing the house with another widow, Phoebe Williams (see above).  Harriett died in 1906 aged 88 and was buried in the same grave as her husband.  The gravestone in the Church appears to suggest she died at Grovesend Farm.  Click here to read about Mark and Harriett

R. J. Merriman – the deeds for the house indicate that it was let for a short time to R. J. Merriman.  We didn’t know anything about him but then we read an account written by Len Hughes which listed the businesses in the High Street.  He included ‘Merrimans the green grocer’ between ‘a bank where the MEB is (now 56) and ‘Symes the tobacconist’ (now 52).   The Gazette published on 17th October 1925 included a notice advertising the sale of household furniture and effects belonging to ‘Mrs Merriman who is leaving’. 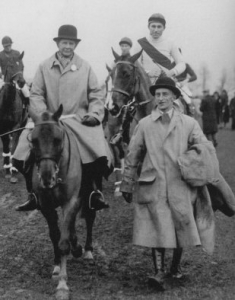 The Days – the 1926 Rate Book shows the house had been bought by the Honourable Mrs Violet Mundy and was occupied by Frederick Day.  Frederick was Mrs Mundy’s groom.  Violet was living at ‘The Farm’ on the Bristol Road.

The photograph on the right shows Violet Mundy on a horse which we assume to be accompanied by Fred Day although we are not sure about this.  We would be grateful if anyone could confirm this or tell us we are wrong.  Fred used to accompany Mrs Mundy’s and her horses to all the meetings she or her horses attended.  Her racing colours were well-known all over the country and she ran many successful horses, culminating in Avenger.  This horse was the favourite for the 1936 Grand National, but fell and broke his neck the fourth fence from home.  Unfortunately Mrs Mundy was ill that day and couldn’t attend the race so she heard the news on the wireless whilst confined to her bed.  The Pathe News website has the original newsreel showing the race which refers to Mrs Mundy and shows Avenger’s tragic fall.  Click here to see this newsreel

The electoral registers from 1927 show that Fred and Fanny Day were living there.  Fanny was Frederick’s mother.  She had been born Fanny Withers on 25th January 1856.  In 1876 Fanny married James Day of Oldbury.  The 1891 census shows them living at Haw Lane, Oldbury.  James was a coal haulier aged 35.  He was living with Fanny aged 35 and their children including Jane aged 2.  Jane was born on 29th December 1889 and Fred on 25th December 1896.

James died in December quarter 1900 aged 45.  The 1901 census shows Fanny still living in Haw Lane and now described as ‘Supported by family’.  She was living with her children: Kate a cook aged 24, Bessie a housemaid aged 17, Jane aged 12 and Fred aged 5, both at school.

We have been told that Fred loved horses from a very early age and that as a child he used to run down the roads of Oldbury slapping his hands against his flanks as if he was riding a horse.  It was inevitable that he would seek a job working with horses and he became Mrs Mundy’s stud groom and manager.  This gave him the opportunity to travel the country with Mrs Mundy, caring for the horses which she used in local hunts and entered in competitions and races.

The 1931 electoral register shows Frederick and Fanny are joined by Frederick’s elder unmarried sister, Jane.  We have also been told a little story about Jane – that she used to walk into Bristol regularly to sell eggs and when the bus service to Bristol was introduced in 1906 she refused to use the bus and continued walking in order to save the cost of the fare and to maximise her profits.

The special register compiled in 1939 in preparation for the war shows Fanny, Jane and Fred living in the house.  Fred was described as a ‘horseman on farm’.

We understand that Fred married at some stage but it didn’t work out.  Fanny, Fred and Jane carried on living there.  We have been told that Mrs Mundy had ‘gifted’ the house to Fred in appreciation of his loyal service to her.  We can however find no evidence to support this.  The only bequest made to Fred in Mrs Mundy’s will was the ownership of Vilner Farm.  The deeds show that Fred bought 54 High Street from Mrs Mundy’s trustees on 25th July 1947 for £800.

The photo on the left was printed in an article in the Gloucestershire Life magazine in June/July 1968.  The article mentioned that Fred had hunted with the Berkeley Hunt for sixty years and that he called his home ‘Hunter’s Hall’.  It added that the house was full of equestrian mementos.

Click here to read about the owners of the property