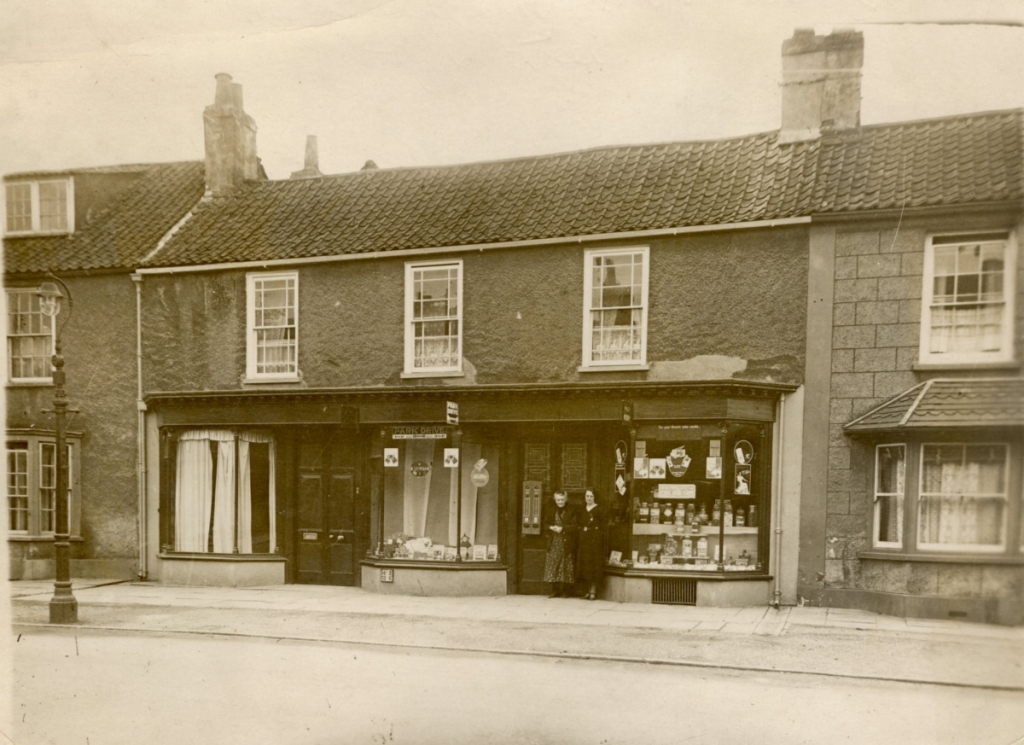 The above photo was taken in 1935 when the property was divided into two units, one of which was a sweet shop.

Unfortunately we haven’t yet seen the deeds to this house.  The little we know of its early history comes from the last will and testament of Nicholas Rippe in 1578.  Nicholas was born about 1558, the son of William Rippe, a tanner and his wife, Katherine (nee Morgan).  Nicholas died in 1578 and amongst the various properties he left to his wife, Dorothy, one which appears to be the house which later became 56 High Street.  It was described as being in the High Street ‘between a tenement of one John Hilpe in the north side and a tenement of one Slymbridge on the south side’.  We know from the documents relating to 58 High Street that it was occupied by John Slimbridge in 1580.  Read more about the Rippe family

Our knowledge of the rest of the houses’ history, its owners and occupants starts in the 1820s.

Robert Young – we know that Robert Young owned the house in the early 1800’s.  In the will of Joseph Trayhurn who died in 1834 his property (number 54 High Street) was described as ‘adjoining southward to a messuage lately belonging to Robert Young deceased and now in the occupation of Griffith Hughes druggist’.

We know from a variety of documents that in 1784 Robert was an assessor and collector of the land tax.  At that time he was living in house owned by William Reed.  Another document shows that in 1790 he was paying rent to the Corporation for use of ‘a Close called Daggs.’  An indenture dated 1810 refers to him as a schoolmaster.

Robert died about 1828.  His will shows that he owned two properties, the one in which he was living in the High Street, which we assume to be the present 56 High Street, and a cottage and paddock of ground called ‘Polterbrook’ which was occupied by William Thompson.  The properties were left in trust for the benefit of Robert’s wife, Mary, whose maiden name may have been ‘Motley’ and after her death the profits were to be divided between their four children: Lydia (who married James Thurlow, mealman at Thornbury Friends Meeting House in 1825 and they settled to live at High Wycombe), Robert Young, ironmonger of Stourbridge, Rebecca Young and Elizabeth Young, both spinsters and Mary Motley, spinster of Thornbury and Joseph Motley, yeoman of Kingsweston.

The land tax records from 1829 and 1830 show that Mary Young moved to live at 62 High Street.  She also owned a house occupied by George Chandler.  When Robert and Mary’s daughter, Lydia Thurlow died in High Wycombe in 1845, the notice in the newspaper referred to her as ‘the daughter of the late Robert Young of Thornbury a respected member of the Society of Friends.’

Griffiths Hughes – the last will of Joseph Trayhurn referred to above shows us that Griffiths Hughes was living in 56 High Street in 1834.  He is also listed as living there in the 1840 Tithe Survey and the 1841 census.  The 1841 census shows Griffiths was a druggist aged 40 living with his wife, Mary aged 39 and their children: Sarah aged 8 and John aged 6.  Alice Hughes, presumably Griffiths’ mother was living with them, also four others, an apprentice druggist, William Becket aged 16, Ellen Roach, a female servant aged 16, Francis Wayte, a tea dealer aged 38 born in Calne and Phoebe Wayte aged 45 from Bristol.

Griffiths was Mayor of Thornbury in 1842/44.  The 1851 census shows Griffiths was a druggist and shopkeeper aged 48. Mary was aged 49 born in Apperly, Gloucestershire.  They were living there with two children: Sarah P. an assistant in the shop aged 18 and John G, a pupil teacher in the National School aged 16 and Eleanor Roach, domestic servant aged 26 from Tytherington.

Griffiths appears to have many interests in addition to his main occupation as a druggist and shopkeeper.  An 1851 newspaper article shows he was an agent for the Phoenix fire Insurance.  There is also a reference to Griffiths in the newspaper report of the 1851 Thornbury Flower Show and because his name is fairly unusual in Thornbury we assume that it relates to the same person – it reported that “One feature of the exhibition was as novel as it was pleasing; the scheme contained three prizes for the best arranged nosegays of wild flowers, to be competed for by children only.  We do not know, for a surety, who was the originator of this happy idea, but we more than half suspect our friend, Griffiths Hughes, whose kind-hearted and tender regard for his little flock of Oldbury and Shepherdine is as proverbial in the town as is his general practical benevolence and usefulness.  Certes, if he was not the original donor, Mr Hughes had offered to double each premium: equally true that the children looked up to him as their benefactor in the matter: for as he approached the show the little urchins gathered around him first by units, then by tens, hanging on to the skirts of his coat, tugging him encouragingly by the arm, while his face beamed with good nature and his tongue dictated to them lessons of philosophy and breathed fatherly warnings against despondency or angry feeling in the event of disappointment‘.

In 1855 Griffith won a prize for his filberts at Thornbury Horticultural Show.  On 30th August 1855 their daughter, Sarah Powell married Joseph Lugg (a schoolmaster and the son of George Lugg, farmer) and they settled to live at 81 High Street.  Griffith also involved himself with Joseph Lugg’s National School – he undertook to teach the boys to swim in the Baths and when the boy could swim the length of the bath (about 20 yards) he presented him with 6d.

Griffith’s wife, Mary, died on 6th September 1860 aged 59.  On 1st November 1860, his son, John Griffiths Hughes married Sophia Willshen at Thornbury.  Sophia was the daughter of James Willshen and his wife, Catherine.  Sophia had been living with her parents next door at 58 High Street in the 1851 census.  John and Sophia had two children: Gertrude Mary Powell Hughes baptised on 17th February 1864 and Katherine Sophia Hughes baptised on 15th November 1865.

The 1861 census shows that son, John Griffiths Hughes had taken over the running of the shop.  He was described as a chemist and druggist aged 26 living with his wife, Sophia aged 26 and father, Griffiths Hughes, a retired chemist aged 60.  Jane Rugman was also living there as a house servant aged 17 from Thornbury.  Griffiths died aged 65 and was buried on 18th June 1866.

In 1871 Sophia’s father, James Willshen.  In his will dated 24th August 1871 he left the property at Poultry Brook which he had purchased from Mrs Caroline Carrick and the freehold cottages in Gillingstool which he had purchased from Anselm Harvey to his married daughter, Sophia Hughes for her lifetime.  Following Sophia’s death the property at Poultry Brook was left to her daughter, Gertrude Mary Powell Hughes, and the cottages in Gilingstool to Catherine Sophia Hughes.  The cottages at Gillingstool were those which became known as ‘The Nook’.

John died on 13th March 1874 aged 39.   The 1881 census shows Sophia moved away from Thornbury.  She had become a companion to an elderly lady in Pudsey in Yorkshire.  By 1891 she had returned to Thornbury to be a companion boarding with George and Ruth Ball in Grovesend.  The 1901 census shows Sophia had set up home with her two daughters, still unmarried.  They were living in High Street, Mangotsfield.  Sophia died on 26th March 1922 aged 85 and she was buried in the same grave as John in Thornbury St Mary’s.

John Stevens – the 1876 Rate Book shows John as owner and occupier of the property.  The 1881 census shows John operating as a grocer and seed dealer.  Click here to read more about John and Emma

The Honeybornes – the 1885 Rate Book shows Austin John Honeyborne was the owner of the property.  Austin inherited the property following the death that year of his mother, Emma Stevens (see above).

The 1885 and 1890 Rate Books show the property was rented out.  The 1894 Rate Book shows that Austin was the occupant, as well as the owner and the 1897 and 1899 Trade Directories show Austin was running a shop there as a grocer and tea dealer.  In June 1899 he was killed in an accident returning from Bristol with his trap loaded with groceries.  He was buried in the Congregational Burial Ground on 11th June 1899 aged 40.  For more information about this accident and the lives of Austin and Maria – click here.

Following Maria’s death, the Honeyborne property was divided between the 3 sons.  James Percy Honeyborne acquired the house and shop at 56 High Street in which he lived.

The shop and premises were later again rented out and on this occasion Eli Butt set up in business there.

By 1910 Eli had moved to 51 High Street and the shop was taken over by ‘The Honeyborne Brothers’.  They are listed as grocers and provision merchants in the 1910 and 1914 trade directories and they were living in the High Street in the 1914, 1915 and 1916 Prewett’s Street Directories.

The 1911 Census shows that Maria Honeyborne, a widow aged 48, was living there with her three sons.  Maria was described as having ‘private means’.  Austin Walwin was a law clerk aged 25, James Percy was a grocer aged 23 and Arthur Land was a grocer’s assistant aged 20.

We know that one of the brothers was James Percy whose service record for the time he served in the Army shows he worked previously as a grocer.  When he was attested on 6th December 1915, he was described aged 28 years, 8 months, height 5ft 7.25 inches, 140 lbs, chest 37.5 inches when expanded, and his next of kin was his wife, Florence Annie (nee Dayman) from Stapleton whom he married in Thornbury Independent Chapel on 21st November 1914.  He served in France and was demobbed on 4th November 1919.

read later history of this property