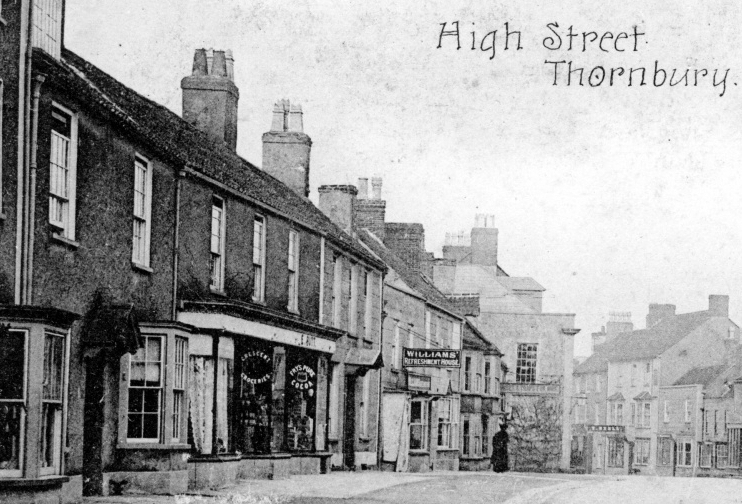 read about the earlier history of the property

Arthur Le Ball – the 1885 Rate Book shows that the property was occupied by ‘Arthur Le Ball’.  We are not sure why the family adopted the name of ‘Le Ball’ as opposed to Ball.  Arthur was born in Fishponds in 10th May 1857, the son of John Henry Ball, a blacksmith and ironmonger and his wife, Sarah Ann.  Arthur was christened on 28th March 1869.  In 1884 Arthur married Emily Bethia Sansom in Colchester.  Emily was born in Colchester in 1857, the daughter of Charles H. Sansom, a merchant clerk and his wife, Harriett.

In 1890 Arthur and Emily appeared to have separated and moved away from Thornbury.  The 1891 census shows Arthur returned to live with his parents in Fishponds, taking with him two of the children: Elizabeth and John.  Elizabeth died in 1893 aged 6.  Emily went back to live with her parents taking the other two children (Alice and Charles) to live with her.

Luke Cullimore – the 1890 Rate Book shows Luke as the occupant.  The 1891 census shows him to be living there with his wife, Amy, and five children.  By 1901 he had moved to Sibland.  Click here to read more

Eli Butt – the 1899 Rate Book shows he was living there.  The 1901 census shows Eli was a grocer and shopkeeper aged 45 from Wincanton.  He was living with his wife, Elizabeth aged 45 from Banton, Somerset and their children: Jessie Mabel a draper’s assistant aged 18, Reginald William aged 13 and Irene Elsie aged 11 all born in Castle Cary.

Eli was born in Bruton, Somerset in 1852.  He was the son of Charles Butt, a labourer and his wife, Sarah (nee Whatley).  By 1871 Eli had become a grocer’s porter in Bruton.  In 1877 Eli married Elizabeth Hockey in the Wincanton area.  Elizabeth was born in 1853.  The 1881 census shows that Eli and Elizabeth had settled in Castle Cary.  Eli was now a grocer in Fore Street and they had two children: Albert Percy aged 3 and Ernest Allan aged 1. Eli’s brother, Harry, was living with them and working as a grocer’s assistant aged 25.  We think their son, Ernest Allan died in 1886 aged 6.

There is a newspaper report in Huddersfield Daily Chronicle dated 9th July 1884 mentioning that Eli Butt grocer and provision merchant of Castle Cary was bankrupt.  The 1891 census shows the Butts still in Castle Cary and running their grocery.  They now had four children with them: Albert Percy aged 13, Jessie Mabel aged 9, Reginald William aged 3 and Elsie Irene aged 1.

We don’t know what led to the Butts coming to Thornbury.  They were here by 1899 when they were living at 56 High Street.  The 1905 Rate Book shows that Eli had become the owner of 51 High Street, but at the time he was letting it to John Croome Cullimore.  By 1907 Eli had moved in to 51 High Street where he traded as a grocer.  The 1918 electoral register shows Eli was still in Thornbury. 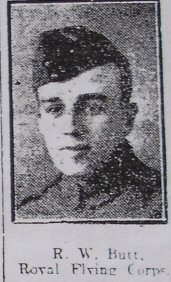 Reginald had joined the 17th Squadron Royal Flying Corps and had been stationed at Farnborough, Birmingham and Dover.  On 17th March 1916 whilst stationed at Croydon he was fatally wounded in a motor accident.  He was riding on a motor transport back to the aerodrome after having dinner when he and three others were thrown out of the vehicle when a seat collapsed.  Reg fractured his skull and he died next day in Croydon War Hospital.  The funeral was held at the Congregational Church, Thornbury.  More than 30 men from the Flying Corps attended the funeral and eight of these were bearers.  More than 40 members of the Berkeley Vale Battalion Gloucestershire Volunteer Regiment were also present.  Reg was aged 28.  He was engaged to Winifred English at the time of his death.

It appears that they moved back to Castle Carey.  Eli is not listed in the 1921 Thornbury electoral register.  In the 1926 Rate Book he is shown as the owner of 51 High Street, but the grocers was being run by Walter Hallen Dent.  Eli died on 27th December 1928 aged 78.  The report of his death says that his wife found him in his room after he failed to appear for breakfast.  The probate record shows that he was living at Castle Carey but he had died Bruton in Somerset.  A family tree on the Ancestry website says that Elizabeth died in a nursing home in Bridgwater in 1934.  In 1934 the year that Elizabeth died the Western Gazette of November 16th announced the sale of the estate of Eli Butt, his house in Castle Cary.  Eli and Elizabeth must have had some fond memories of Thornbury despite their sad losses as the house was called “Thornbury Cottage.” The advertisement here on the left appeared in local newspapers in 1920.  The 1921 electoral register shows Francis Dennis Armstrong living in the High Street.

The trade directories also show that Frank was the Honorary Treasurer of Thornbury & District Horticultural Society.  We suspect that Francis was born in 1879 in the Clifton area of Bristol.  He was the son of Francis Abel Taylor Armstrong, a landscape painter and his wife, Rosabel.  In 1881 they were living at St Andrews in Bristol and in 1891 at St Michaels Hill.  Francis Dennis died in Taunton area in 1959.

We don’t think there is any connection between Francis Dennis Armstrong, the Thornbury bank manager and Frank Dilworth Armstrong, the local benefactor who in 1972 set up a charitable trust for creating a public hall for community use in the town.  This building was given the name of ‘Armstrong Hall’.

We suspect that they may have ran the sweet shop shown in the photograph at the top of the 56 High Street page.  The photo was taken in 1935 and it appears to show that the property had been divided, with the sweet shop occupying the right side.  The electoral register of 1938 says only that Sarah Jane and William James lived in the High Street but we assume they continued to live at the same address.  Sarah Jane died aged 74 in Westminster House and was buried in Thornbury Cemetery on 26th January 1939.  William James died aged 81 and was buried in the same grave on 18th January 1940.

Hector and Alice Gill – the 1939 register compiled in preparation for the war shows that Hector and Alice Gill lived in Westminster House with William Cripps and Catherine Giles.  William Cripps listed in the register of 1939 was the father of Alice Gill nee Cripps.  William was born in Llantrisant in South Wales and was the husband of Sarah Jane Cripps referred to above.  William Cripps was a market gardener and he lived in Dunsbourn near the Robinswood Hill reservoir in the Tuffley area of Gloucester until he moved to Thornbury.  It would seem that the Gills occupied part of the property at 56 High Street even when the families listed below (Austin Bromley, James William Austen Brooks and The Burrows) occupied another part.

Albert Edward Bromley – was shown to be living at Westminster House, High Street when his son Francis Edward Bromley started at the Council School in 1937 having moved to Thornbury from Birmingham.  The Bromleys didn’t stay long, moving first to Easton Hill and then away from the area.

James William Austen Brookes – we have been told by a reliable source that there was a nice little old man running a herbalist shop in the late 1930’s.  This would appear to be James W A Brookes who gave his address as “Westminster House, High Street” in the Trade Directory of 1939, although he does not appear in the electoral register of 1938 in Thornbury and the register compiled in 1939 in preparation for the war shows that James and Lily Brookes lived in Thornbury Road, Alveston.

James Brookes was born in Church Setton in Shropshire in 1867.  It is possible that he was the son of Matthew and Hannah Brookes.  The 1881 Census shows that James Brookes of the right age was a scholar aged 15 who was born in Shrewsbury.  His elder brother William was a dentist and his father Matthew was a provision dealer.  The 1891 census shows that James William Brookes lived in Wellington, where he was a boarder with a dressmaker, Matilda Pritchard.  James was 24 years old and a medical assistant.  By 1901 he had moved to Llantrisant in Wales, where he was a medical dispenser boarding with Thomas Llewellyn a surgeon and physician.  It seems likely that James married Lilian Rigby in Kings Norton in 1919.  In the early 1930’s James was trading at 14 The Plain and by 1935 we believe he was living at The Hatch in Castle Street.  James died in Thornbury in the December quarter of 1947. The Burrows – according to the electoral register, Geoffrey Thomas William Burrows and his wife, Margaret E Burrows were living in ‘Westminster House’ in 1946.  In 1947 they opened The Apple Pie Restaurant.  Their planning application requested a conversion of two rooms, an office and lounge, on the left hand of the building.  They claimed that there was no other existing business trading solely as a restaurant and cafe and that it would be an added attraction to the Town.  George added that he was an ex-serviceman having served in the Army from June 1940 to March 1946 and that he had been a resident in Thornbury since 1935.  We know that the Apple Pie was still operating in May 1949 because it was mentioned in the Western Daily Press as a venue for teas during the Gloucestershire Open Gardens week.  However we have found no further mention of it and by 1950 the Burrows had moved elsewhere. Henry had been born on 4th October 1924, the son of Noel Hales Court, the Vicar of Littleton and his wife Ethel Marion.  In 1939 Henry joined the Thornbury & District Electricity Company as an apprentice electrician and continued working with them until 1942 when he was called up.  Henry continued his interest becoming an electrician in the RAF.  On 22nd March 1947 whilst still serving in the RAF, Henry married Evelyn Marjorie Gardner in Colchester.  ‘Marjorie’ as she was known, was the daughter of Isaac Richard Gardner, an insurance officer.  A newspaper article at the time of their Golden Wedding recalled that they had met on a ‘blind date’ whilst they were both serving in the RAF.  At the time of Henry’s marriage the Hales Court family were living at The Haven, Crossways .

The Museum has a letter from Francis Henry Grace dated 18th February 1948 providing Henry with a reference.  This indicates that Henry had now left the RAF and was seeking work locally in the electrical trade.  Another letter dated 1951 shows that he joined the Midland Electricity Board (M.E.B.).

The 1950 electoral register shows the Henry and Marjorie were living at 56 High Street, still being referred to as ‘Westminster House’.  By the 1954 electoral register they had moved to 18 Park View Avenue.  The Gazette reported on a tragic accident at the Park View Avenue house when their two year old son, Richard Noel, was electrocuted and died when he inserted a metal key into an electrical socket. We have been told that the M.E.B. only made use of the ground floor of the building and the upstairs became unusable because it was considered too dangerous.  When the M.E.B. closed, the property was acquired by Mike and Ros Fawcett in 1996.  They set about restoring the building and making it usable as a private household and they were presented with an award for the quality of their work by the then owner of Thornbury Castle.

Since the Fawcetts moved away it was occupied by Nigel and Linda Booty who moved here from Pullins Green and then in 2007 by Sonia Jackson and her husband, Derek Greenwood.