This page covers the period when the property at 57 High Street was used as the Castle Temperance Hotel and Coffee Tavern.  Click here to read the rest of the history of this property

Sir Stafford Howard of Thornbury Castle was a strong believer in the temperance movement as an M. P. and as an individual.  In 1880 he and his wife Lady Rachel Howard convened a meeting of the Church of England Temperance Society at the Castle and that year they opened The Castle Coffee Tavern in the recently vacated Attwells school building in St Mary Street.  Sir Stafford Howard did not own the building in St Mary Street, that was owned by Misses Churchill of The Park, Thornbury.  At the opening of the coffee tavern it was said that ‘Coffee taverns supplied all the elements of social intercourse, good fellowship and friendly relations between neighbours, without the dangerous element of intoxicating liquor, which was the chief article of sale in every public house’.

The coffee tavern proved to be a successful venture and soon needed larger premises.  An agreement must have been reached with Obed Edward Thurston allowing his property at 57 High Street to be used as The Castle Temperance Hotel and Coffee Tavern which opened about 1889.  The building had previously been used as The Beaufort Arms Hotel which had closed about 1882 and had been under-utilised since that time.  Sir Stafford Howard took a keen interest in his temperance work, even employing reformed drunkards so that he could keep and eye on them.  This was in contrast to his father, Henry Howard, in 1875 who was one of the employers who supplemented his staffs wages with beer. 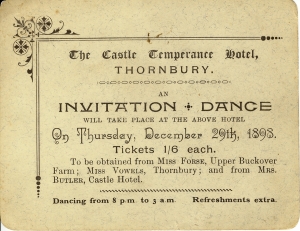 On 25th March 1887 Stafford Howard leased the loft at the rear of the adjoining property and at his own expense adapted the room for the purposes of holding dinners, meetings etc in connection with the proposed new Coffee Tavern or Temperance Hotel.  An access door to this room was created from the second floor of the Hotel.  The lease was for 21 years.  Click here to read about The Assembly Room

We know that the Hotel advertised dances and we have two copies of event notices.  The one on the right below shows that the dances continued until 3 a.m.  Click on the thumbnail on the left below to see the other notice.

The owner of the property was Obed Edward Thurston until his death on 8th December 1899 and then continued under the management of his representatives.  Inland Revenue documents dated December 1906 show that the hotel was still part of the Thurston estate but it was contracted to be sold for £800.  The 1907 Rate Book shows the property was purchased by Ernest Percy Weatherhead.

The Trade Directories of 1912 and 1915 show that the Thornbury Rifle Club had its range at the Castle Temperance Hotel.

The Temperance Hotel remained in existence until 1919 by which time the Temperance Movement having met its more moderate aspirations gradually petered out and the building was replaced by the cinema called ‘The Picture House‘. 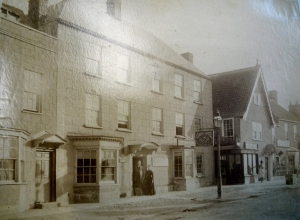 Charles Turner – the licensee records of the Petty Sessional Court show that Charles applied for a licence in 1886 to allow the game of billiards to be played on the premises.  It seems as if Charles had transferred with the business when it moved from the premises in St Mary Street as he was mentioned as being the licensee there in 1881.  We don’t know any more about Charles although he may have been the person listed under that name who was a member of the Thornbury Detachment of the 1st Volunteer Battalion of the Gloucester Regiment in 1886.  He was not listed as a member in 1888.

William McGowan – the 1887 Rate Book shows that William was the tenant of the Hotel.  In 1888 he was replaced by Josiah Bennett.  We don’t know any more about William.

Josiah Bennett – the 1888 and 1890 Rate Books show Josiah as the occupant.  Josiah seems to have had two roles, both working for Stafford Howard.  He is listed in the 1889 trade directory as being Head Gardener for E.S. Howard and as Manager of the Castle Temperance Hotel and Coffee Tavern.  The 1891 census lists Josiah as a gardener at the Castle Hotel.  He was aged 37 born in Exeter, Devon living with his wife, Sarah Ann, aged 36 and son, Charley Bennett aged 10 born in Exeter and a servant George Hurn aged 18 born in Thornbury.  In 1893 Josiah bought the adjoining property.  He appears to have left the Hotel at that time, although we don’t know what he did with the new property.  Read more about Josiah

Richard Samuel Bovy – the 1894 Rate Book has the name of ‘Bovy’ scribbled into the tenant column.  The Bristol Mercury of 31st March 1894 reported that the billiard licence of the Castle Coffee Tavern was transferred to Richard Samuel Bovy.

The Butlers – we don’t know exactly when Henry Butler became the manager of the Castle Temperance Hotel but he gave this as his occupation when their son Howard Arthur Butler was baptised on 16th July 1897.  Henry Butler died in Thornbury on 10th May 1899 aged only 41.  Henry’s wife, Caroline Elizabeth Butler, had a baby, Reginald Ernest Butler, born on 1st June 1899 shortly after his father’s death.  He was baptised on 29th June 1899.  It is hard to imagine how Caroline could cope as her baby Reginald Ernest Butler died soon afterwards and his death was registered in the September quarter of 1899, presumably only a few weeks after his father died.  Despite all this the widowed Caroline Butler took over her husband’s duties at the Temperance Hotel.

In the 1901 census Caroline aged 42 was living with Robert Withers aged 33, who let traps for hire.  Robert Withers was the proprietor of the Castle Hotel Stables.  They had Caroline’s two sons living with them; Alfred Harry aged 11 and Howard Arthur Butler aged 3.  They had a servant Ellen Vizard aged only 13.  Caroline and Robert Withers had one son, Charles Withers born on 2nd June 1901.  His birth certificate records the birth of Charles Withers to Robert and Caroline Elizabeth Withers (late Butler, nee Bevan).  Shortly after the birth of Charles, on 3rd September 1901, Caroline had an untimely death at her home in Castle Street, Thornbury, unfortunately drowning in a rainwater barrel.  Read more about the Butlers

Henry Edward Curd – Henry is listed in the 1904 trade directory as being the Castle Hotel manager and the manager of the Castle Coffee Tavern.  The 1905 Rate Book also lists Henry as living at the Castle Hotel.

Henry was baptised in Buxted, Sussex on 16th February 1873.  He was the son of Thomas Curd and Jemima Benton (or Guy).  The 1881 census shows Henry with his parents living at Five Ash Down, Buxted.  By the 1901 census Henry had become a tailor and had moved to Thornbury.  He was boarding with Frank Symes at 18 High Street.  By the 1907 Rate Book Henry had moved away from Thornbury and the 1911 census shows Henry as a hotel manager in Bleasy and Fickerton cum Morton in Nottinghamshire.  He is noted as being married, but his wife is not there at the time of the census.  Henry appears to return to the area of his birth as his probate record shows he died on 7th August 1935 at The Retreat, Five Ash Down near Uckfield.  His executor appears to be his widow, Mary Ann Curd which leads us to believe that Henry married Mary A Foord in the area of Battle, Sussex in 1931.

Sarah Ann Hughes and Selina Harris – Sarah Ann was the widow of George Hughes, with whom she had run The Plough in St Mary Street in the 1880’s.  George died in 1906 and Sarah Ann moved to The Castle Hotel.  Sarah Ann is shown as the hotel keeper in the 1907 and 1910 Rate Books and the 1910 trade directory.  She died on 22 January 1913 aged 55 years.  Following her death, the Hotel was taken over by her unmarried sister, Selina Harris.  She could not have run the hotel for very long. Selina died in January 1915 aged 64 and her obituary says she had retired to live in St John Street and had been in ill health for several months before moving to live with sister about six weeks before her death.  Click here to read about the Hughes

William Thomas Lawrence – William was described as the ‘proprietor of the Temperance Hotel’ in the 1914, 1915 and 1916 Prewett’s Street Directories and when he was buried in Thornbury Cemetery on 16th December 1918.  He was aged 43.

On 29th January 1919 Ernest Percy Weatherhead, draper and outfitter sold to Edmund Cullimore for £800 all that messuage or dwelling house known as The Castle Hotel together with the yard, stable, coachhouse and other outbuildings and premises extending to St Mary Street and now in the occupation of Mrs Annie Lawrence as tenant. A condition was put on the sale that Edmund would not allow any part of the premises to be used as part of a trade or business associated with a drapers, outfitters or house-furnisher.

Edmund used the property for the building of the town’s cinema known as The Picture House.  Click here to read more