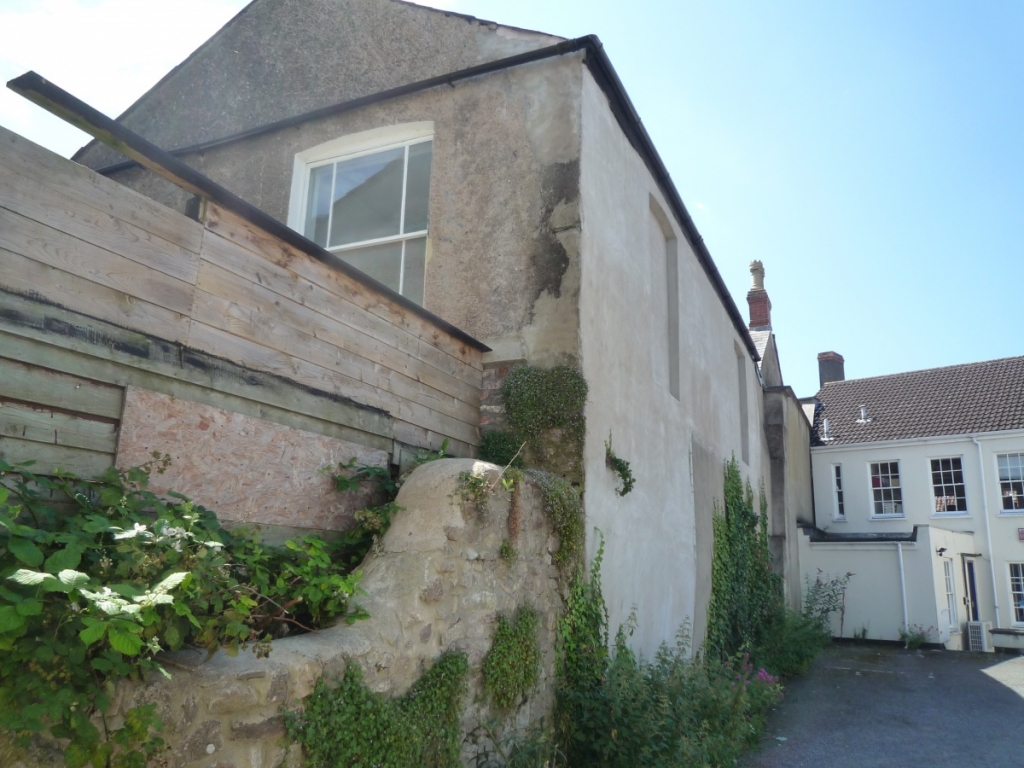 This page is about ‘The Assembly Room’ which was part of the property we now know as The Knot of Rope, 59 High Street.  Click here to read about the rest of the history of that property.

The photo on the left shows The Assembly Room hidden away behind The Knot of Rope.  In 2011 when we were researching the history of the pub we were thrilled to be shown The Assembly Room by the landlady.  It remains a virtually unused part of the property.  We had to find out about its past..

When the Exchange Hotel was advertised for sale in 1918 one of its many facilities was the Assembly Room.  The sale particulars noted that it could “accommodate 200 people,

[and was] well lighted, with two entrances, ante room and lavatory.” Below it were “two excellent rooms now used as Store Rooms
“.

This two storey dance hall behind what is now the Knot of Rope has an interesting and slightly complicated history.
The two entrances were an essential feature, not just as fire exits but because two entirely different establishments used the facility at different times.

It began as a stable and a loft belonging to the gabled building which was then separate from the public house next door, which was then called Michaels.  The gabled building was a drapery used by William Harris Ponting.  On 25th March 1887 there was an indenture between William Harris Ponting and Edward Stafford Howard by which Stafford Howard leased the loft which was then said to measure about 33 feet by about 18 feet for a term of 21 years.  The room was described as being “over the back kitchen and stable in the occupation of William Harris Ponting and forming part of his premises”.  Mr Stafford Howard was obviously planning to make considerable changes to this property.  It was agreed that he would “at his own expense remove the present chimney stack, build a brick partition at one end of the loft and build up the present windows and doorways and convert the said loft into a room for the purposes of holdings dinners meetings etc in connection with the proposed new Coffee Tavern or Temperance Hotel”. ”

The Temperance Movement was quite a popular cause in Thornbury at this time, the more so because of the support given it by Sir Stafford Howard of Thornbury Castle.  Click here to read about the Castle Temperance Hotel

We do not know when the loft began to have the rather grand title of the Assembly Rooms but it certainly appears under that description in the Rate Book of 1890 while it was still owned by William Harris Ponting and in 1894, when it was occupied by Josiah Bennett.

We have thumbnail photos of two functions held at the Assembly Rooms.  click on them to see larger images.  The invitation to a dance here on the left is quite interesting.  By the date on the ticket 1898 the gabled building had become part of the Royal Exchange Hotel a licensed premises.  It seems that the Assembly Room was part of that licensed business but being used as a function room by the Castle Temperance Hotel.

The Temperance Hotel remained in existence until 1919 by which time the Temperance Movement having met its more moderate aspirations gradually petered out and the building was replaced by the cinema called ‘The Picture House’.

After it ceased to be leased by the Castle Temperance Hotel it continued to be called the “Assembly Room” hence the description in 1918.  It presumably became part of the Exchange Hotel was accessed through that building or from its rear yard.

It was called the Assembly Room in the 1926 Rate Book when the property and the Exchange Hotel itself were both occupied by William Morton and owned by the Ashton Gate Brewery.

In the 1930s Mrs Rosina Hutchins taught dancing at the Assembly Rooms.  Pam Lewis was one of the many people who can recall being taught there.  Again this must have been acceptable as the rear access through from St Mary Street meant that the pupils of the class would not have to go on licensed premises.

War time saw a new role for the Exchange and the Quarter Master’s Stores for the 6th Regiment of Maritime Artillery were at the back downstairs.  On the left we have a thumbnail photograph of some soldiers being issued with uniforms.  Click on it for a larger image.

Today the Assembly Room has a rather less prestigious role as store rooms behind the Knot of Rope public house.   The stage is still there.  The kitchen and other room below are also used as store rooms but they are still said to have a “dumb waiter” to convey refreshments to the dancers in the rooms above.  At first glance it seemed like an ideal venue for music evenings and entertainment being so separated from residential areas.  However although there have been thoughts to make more use of the building in that way, it was realised that it would be very expensive to refurbish it and make the building comply with the modern health and safety regulations.