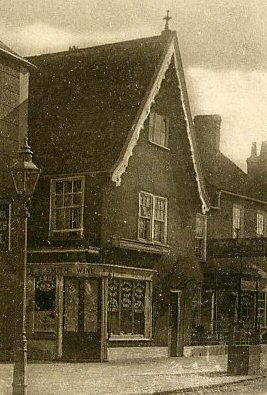 This page is about ‘The Gabled Building’ which is a name we have created for the purposes of this website to describe the building shown in the photo on the left.  The building is now part of what we now know as The Knot of Rope, 59 High Street.  Click here to read about the rest of the history of that property.

Our information on this property (and the other parts of The Knot of Rope) has come from a variety of sources.  In addition to our normal collection of census records, rate books, newspaper reports etc, we are particularly grateful to Meg Wise who has a collection of deeds relating to the property and extensive notes made by Tom Crowe when he was shown the deeds some years ago.  We also collected some deeds and documents ourselves from Gloucester Records Office.

The early history of the gabled building overlaps with the history of the other two parts of the Knot Rope.  We know from a document dated 1743 that an inn called the Mermaid had previously been located in this building OR the adjoining two smaller buildings and that when the Mermaid closed the property had been the home and business of the Wetmore family who were maltsters for several generations.  Click here to read about the Mermaid

Unfortunately we can’t say for sure which of the three buildings that now form the Knot of Rope was actually the Mermaid.  Initially we assumed that the two adjoining buildings on the right had been the Mermaid because a marriage settlement dated 1743 referred to the property as ‘heretofore being two messuages and sometime since used as an inn and known by the sign of the Meremaid’.  Furthermore we found a declaration by Stephen Hignell in 1869 who said that Thomas Wetmore (whose father was the subject of the marriage settlement) had lived in the property where James Michael lived which we know from other sources were the two right hand buildings.  However, deeds relating to the adjoining property (number 57 High Street) indicate that the property to the SOUTH of number 57 was formerly the inn and owned by various generations of the Wetmore family.  This suggests that it was the gabled building which was possibly the Mermaid.

Thomas Morgan
In the late 1820’s the property and several of the adjoining properties had been bought by Thomas Morgan a plaster and tiler.  He set about developing the various properties to maximise his rental income.  He converted a stable building to the rear of the gabled building into three cottages which he let out to tenants and he did similar conversions to some of his other buildings.

In the 1840 Tithe Survey the gabled property was Plot 154, a house and garden owned by Thomas Morgan and occupied by Samuel Witchell Lovegrove.  Thomas had converted a stable at the rear of the gabled building into three cottages fronting St Mary Street.

In 1851 census the property appears to be vacant.  Thomas and his family were living at 2 St Mary Street.  The 1859 Rate Book and the 1861 census show Thomas Morgan had moved to live in his High Street property.  In the census he was described as a land and house agent aged 68 living with his daughter Charlotte a grocer aged 32.

Thomas Morgan made his last will dated 17th September 1869 and he left the property unto his daughter, Charlotte Morgan.  He also left her the adjoining property let out to James Michael, the two houses next door to that on the High Street (let out to Frederick Jones and John Hawkins), the stable and yard adjoining Chapel Street and the three cottages in St Mary Street.  Thomas died on 20th December 1869.  Click here to read about Thomas and his family

Charlotte Morgan – inherited the property following her father’s death on 20th December 1869.  The 1871 census shows Charlotte still living at the property and described as a grocer aged 42.

Charlotte also inherited his debts.  On 30th October 1871 Charlotte Morgan paid John Crowther Gwynn and James Freeman the executors of John Carwardine’s will £200 in part satisfaction of the £400 borrowed.  On 2 July 1877 Charlotte borrowed £100 from George Westthorp.

On 28th March 1878 Charlotte Morgan sold several properties to William Harris Ponting for £1300.  This allowed Charlotte to pay off her debtors, the trustees of John Carwardine and George Westorp.  The property included the ‘messuage late in the occupation of James Screen and now of Charlotte Morgan which said messuages are situate on the East side of the High Street’ but also included the adjoining messuage ‘wherein James Ford formerly dwelt and James Michael lately dwelt and James Merrett Michael doth now dwell’ and also ‘all that late stable sometime long since converted by Thomas Morgan deceased into three cottages late in the several occupations of Mary Woodward, James Collier and Elizabeth Robertson and now in the respective occupations of Mark Williams, John Smith and (blank) Bendall as tenants adjoining St Mary Street otherwise the Back Street.”

Charlotte also assigned to William Harris Ponting all the yard with the stable and buildings behind the High Street properties with the outlet onto Chapel Street which were occupied by James Merrett Michael.

William Harris Ponting – William acquired several properties from Charlotte Morgan on 28th March 1878.  Of these he moved into to occupy the old property, but continued to let the property next door to James Merrett Michael.  William had several occupations.  He was a draper and milliner by trade, but the 1881 census lists William as a solicitor’s general clerk.  Trade Directories around this time show him as Deputy Superintendent Registrar and agent for Norwich Union and the Gresham Building Society.

William also went into business as a coal merchant with Frederick William Nalder.  They used the premises in the rear fronting St Mary Street as a coal depot.   This building had been a ‘late stable sometime long since converted by Thomas Morgan into three cottages late in the several occupations of Mary Woodward, James Collier and Elizabeth Robertson, afterwards of Mark Williams, John Smith and – Bendall which said cottages were afterwards converted into a coach house and now used as a coal depot situate in St Mary’s St otherwise Back St and now in the occupation of Messrs Ponting and Nalder, coal merchants‘.

The 1881 census shows William living in the property, a solicitor’s clerk aged 28 living with his wife, Jemima S aged 32 from Stogumber in Somerset.  Click here to read about the Ponting family

On 25th March 1887 William agreed with Edward Stafford Howard to allow him to lease the loft extending over the kitchen for 21 years.  He planned to convert the loft to a room for holding dinners in connection with the proposed new Castle Coffee Tavern next door.  Click here to read about The Assembly Room

On 21st October 1892 it was reported in the Bristol Mercury that Josiah Bennett was the host of one such dinner.  This one was for the allotments tenants of E S Howard given at the Castle Coffee Tavern.

On 1st February 1893 William sold the fully licensed premises next door to the tenant, James Merrett Michael, for £995.  James also bought the three cottages fronting Chapel Street.  William was required to build a wall to divide off the premises to be retained by himself.  James Michael did not acquire the cistern, but was allowed to use it for 6d per year.

On 24th June 1893 William sold the old building to Josiah Bennett for £630.  It was still being described as a messuage, shop and premises, but there was a condition attached to the sale that it should not be used for the sale of drapery or millinery for a period of 12 years from June 1893.  The sale included the coach house used as a coal depot by Ponting and Nalder, the large room let out to E. Stafford Howard and the rainwater cistern let to Mrs Smith next door.

Josiah Bennett – on 24th June 1893 Josiah bought the property from William Harris Ponting for £630.  Josiah was described as a hotel manager at the time of the purchase.  We don’t know what Josiah did with the property.

Josiah was born about 1851, the son of John Bennett, a farmer and his wife, Susanna.  In 1871 they were living on a 27 acre farm at Middle Bradley near Tiverton.  In 1876 Josiah married Sarah Ann Norris.  The 1881 census shows them living at Little Bradleigh near Tiverton with their son, Charley who was three months.  Josiah was described as a ‘late farmer – out of business’.

By the time of the 1881 census the Bennetts had moved to Thornbury.  Josiah is listed in the 1887 Rate Book as living in one of the Castle Lodge Houses.  The 1889 trade directory lists Josiah as being the Head Gardener to E. S. Howard and the Manager of the Castle Temperance Hotel and Coffee Tavern.  It gives Josiah’s address as the High Street.  The 1890 Rate Book shows him at the Castle Hotel in the High Street.  This rate book also notes that Josiah is a tenant of the Assembly Room to the rear of the Castle Hotel.

The 1891 census lists Josiah as a gardener at the Castle Hotel.  He was aged 37 born in Exeter, Devon living with his wife, Sarah Ann, aged 36 and son, Charley Bennett aged 10 born in Exeter and a servant George Hurn aged 18 born in Thornbury.

In November 1893 Josiah was a witness in a court case against PC Albert Withers who was said to have taken advantage of a young lady who got drunk at the Alveston Flower Show.  Josiah was able to give evidence because he had been walking down Alveston Hill after the flower show.

The 1894 Rate Book shows Josiah was the owner and occupant of the old part of the Exchange and the Assembly Room.  We note that in 1893 Josiah took out a mortgage on his premises for £500 with a person called Robert Cozens.  Josiah seemed to get into financial difficulty and must have lost the property to Robert Cozens because in 1896 it is Robert Cozens who sold it to R. H. Smith.  We don’t know what became of the Bennetts after that time.

Richard Hobbs Smith – on 25th March 1896 the property was sold to Richard Hobbs Smith for £630.  Richard had bought the pub next door from James Merrett Michael on 24th June 1892.  He also bought the coal depot fronting St Mary Street and the three cottages in Chapel Street.  Richard extended the pub into his new acquired premises so that on the High Street it covered the three buildings which still make up The Knot of Rope today.

Richard also gave the pub, a new name, The Royal Exchange, although it wasn’t long before it was shortened to The Exchange.  Click here to read about The Exchange