This page is about ‘Michaels’ which was located in part of The Knot of Rope, 59 High Street.  Click here to read about the rest of the history of that property.

‘Michaels’ was the name of the pub which originally run as an off licence by a wine and spirit merchant.  It derived its name from the Michael family.

James Michael was associated with the property as a tenant in the early 1840’s.  The later census records show James was born in Westbury in Wiltshire about 1804.

The 1841 census finds James living in Canonbury Street, Berkeley.  He was an innkeeper living with his wife, Ann and daughter Sarah Ann aged 8 months (baptised in Berkeley on 3rd February 1841).  Although we haven’t found his marriage, we suspect that James married Ann Merrett, who baptised on 25th July 1805, the daughter of Richard Merrett, a tailor of Berkeley.

One of the heirlooms owned by a descendent of the Michael family is a water-coloured painting designed as a presentation to James Michael in 1836.  It signed by Stephen Jenner.  Tiny caricatures of what are presumably local people make up the letters and numbers in the centre.  Around this are at least 20 tiny cartoons depicting local life including Dr Jenner at work.  Click on the thumbnail on the right to see a larger image.

The Michaels must have moved to Thornbury about 1842.  A notice appeared in the Bristol Mercury in March 1842 advertising a sale of household and other effects associated with James’s business at The Berkeley Arms in Berkeley.  The details of the sale show that James had run a post house at the inn, and that he was selling over 3000 gallons of home-brewed beer.  It explains that James was giving up the pub business in Berkeley and was taking over the wine and spirit trade of Mr Lovegrove in Thornbury.  Click on the thumbnail on the left to see the full details of the sale notice.

James’s daughter, Sarah Ann died in Thornbury on 12th October aged 4.  She was buried on 17th October 1844 at Thornbury St Marys and her gravestone is still visible today.  James and Ann had two other children: Emily who was baptised on 4th September 1844 and James Merrett Michael baptised on 28th April 1847.  James is shown as a wine merchant on both the baptism records.

On the 17th May 1849 the Bath Chronicle reported a tremendous thunder storm in Thornbury.  The lightening struck a property in the High Street shattered a bedstead to atoms, melted a toasting fork and rendered a servant maid insensible for hours.  The article refers to the unfortunate householders as wine and spirit merchant ‘Mr Mitchell and his wife’.  We believe that this is a newspaper misprint and that it actually gives a vivid account of James Michael and his family.  We have a thumbnail image of the whole amazing tale on the right. Please click on it to read it.

The 1851 census appears to show that James Michael was occupying the premises in the High Street.  He was wine merchant aged 47.  Ann was aged 45 from Berkeley and their children were Emily aged 6 and James aged 4.  A report published in the Bristol Mercury dated 28th January 1860 shows that ‘Miss Michael’ and her brother, the son and daughter of James Michael wine and spirit merchant, were injured when their horse stumbled and fell on Thornbury Hill and they were thrown from the gig.

The 1861 census shows the Michaels still in the High Street property.  James was described as a wine and spirit merchant.

An advertisement published in the Bristol Mercury dated 10th February 1866 shows that ‘James Michael wine and spirit merchant has made arrangements to sell Samuel Allsopp and Sons East India Pale Ale and the October brewings are now ready’.  So James was now selling beer as well as wines and spirits.

In 1869 when Thomas Morgan, the owner of the property wrote his last will and testament he mentioned that James Michael was occupying the house on the High Street and the stable and yard fronting Chapel Street.  The thumbnail image on the right shows a receipt issued by J M Michael in 1870.  It is interesting to see that the items he sells includes not only the traditional ale hops and porter but garden and agricultural seeds as well.  Please click on the image to see a larger photograph.

On 15th February 1871 James died aged 67.  The 1871 census shows that Ann was carrying on the business.  She is listed as a wine and spirit merchant aged 65 living with Emily a seeds dealer aged 26, James an ale and porter dealer aged 24 and niece Elizabeth Robbins, aged 16 from Hotwells. 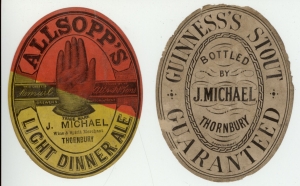 According to local pub historian George Ford, the opening of the railway to Thornbury in 1872 allowed beer to be brought to the town from further afield and this allowed James Merrett Michael to expand his business.  He opened a bottling plant in his extensive outbuildings, for beers such as Guinness and Allsopps light ale which he sold in his off licence thus giving a wider choice for home consumption than was previously available.

On 22nd December 1874 Emily married Henry Robbins, an accountant from St Pauls in Bristol and the son of Henry Robbins, a haberdasher.  Presumably Henry and Emily were cousins.  James married Edith Hall in Alveston on 5th November 1876.  Edith was the daughter of James and Hannah Hall who had been the publicans at The White Lion in the High Street but was descried as a farmer at the time of the wedding.

Ann died on 20th June 1877 aged 72.  Both James and Ann were buried in St Marys’ Church, but in a different grave from their daughter, Sarah Ann.  Following Ann’s death, the business was put for sale on 5th January 1878.  The sale covered ‘the goodwill, licences and possessions of an old established family wine and spirit business so successfully carried on for many years by the deceased, and previously by her husband’.

The 1881 census shows that James Merrett Michael had taken over his parents’ business.  He was described as a wine and spirit merchant aged 34 living there with his wife, Edith, aged 40 from Northwick and a niece, Pauline Rose Hall aged 5 from Thornbury (the daughter of Walter Hall).  According to George Ford, James acquired an ‘on licence’ in 1889 when the nearby Beaufort Arms closed down.  James adopted the name of ‘Michael’s‘ for the pub, presumably the name which locals had used when referring to his off licence. 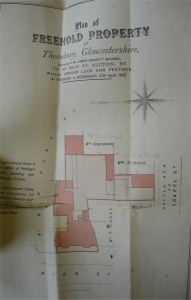 The 1891 census shows the three of them still in the same property.  In early 1892, after 50 years of the family renting the property James Merrett Michael bought it.  There was an agreement of sale dated 1st February 1892 between James and the owner William Harris Ponting for £995 for the fully licensed premises, the yard and stables adjoining Chapel Street.  It was noted that James did not acquire the rain water cistern, but was allowed to use it and to enter the adjoining property to maintain the pipework at a rent of 6d per year.  Click on the thumbnail on the right to view a plan of property at the time of the auction.

Having bought the property James immediately announced his retirement.  The property was put up for auction on 27th April 1892.  It was described as ‘All that fully licensed and much frequented public house known as ‘Michaels’.  It was made clear that ‘in addition to the ordinary trade there will be included the goodwill of a wine and spirit merchant’s business, dealing with a superior class and having a large connection’.  The pub was sold to Richard Hobbs Smith for £1900, thus making James a tidy profit.  The pub was re-named ‘The Exchange‘.