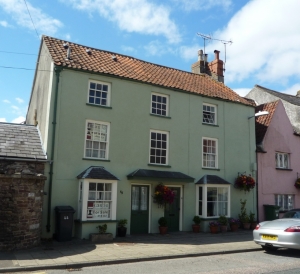 62 High Street is the right hand house of the two houses in this photo taken in 2011.  The older photograph below shows a steam lorry in front of the house.  Click on the thumbnail to see a larger image.

Our knowledge of the history of the pair of houses, now known as 62 and 64 High Street, starts with the Rent Rolls and Land Tax records from the early 1800’s.  In the early 1800’s the records appear to show that the property may have been only one house as there is only one owner and occupier in each of the early records.  By the time of the 1840 Tithe Survey there were two separate houses, Plots 91 and 92, both owned by Elizabeth Cole.  They continued to be owned by a single owner until at least 1926.  Read about the early owners of the two properties During the time the house was owned by the Coles, it was let to the following tenants, that we know of:

Mrs Rossiter – the Rent Roll show she was the occupant at some time.

Mary Young – the Land Tax records of 1829 and 1830 show that Mary was the occupant.  We assume that Mary was the widow of Robert Young, an assessor and collector of tax who had died in 1828.  Robert and Mary had been living in his house at 56 High Street.  Mary’s maiden name was ‘Motley”.  Click here to read more

James Screen – the Land Tax records of 1831 and 1832 and the 1840 Tithe Survey show the house was occupied by James.  We know from the 1841 census which shows James was a baker that he had moved away to a house on the other side of the High Street.  Read more about James Screen

James Williams – James was a brushmaker who lived in the house with his family from about 1845 to his death in 1894.

James was baptised on 27th June 1813 in Thornbury.  He was the son of John Williams and his wife Hannah Williams.  John was a farmer when James was baptised but later became a beerhouse keeper in Chapel Street in the place we now know as the Wheatsheaf.  James married Sarah Stacey who was born in Lambourne in Berkshire.  The Family Search website shows that Sarah Stacey Belcher married James Williams on September 29th 1834 in the Newbury area of Berkshire.  We note that Sarah Belcher the daughter of  Elizabeth Belcher was baptised 2nd December 1910 in Lambourne Berkshire.  In the 1841 census James and Sarah were living in Newbury.  James was a brushmaker aged 30 living with Sarah aged 30 and their children, John aged 4 and Maria aged 1.  Around 1845 the family moved to Thornbury and we suspect they moved into 62 High Street which is where they were living in the 1851 census.  The census shows James was a brushmaker aged 37 living with his wife, Sarah aged 40 and their children, John aged 14, Maria aged 11, James aged 8, Edwin aged 6, Henry 4 and Francis aged 1.  Their eldest four children were all born in Newbury, the youngest two were born in Thornbury.

The family were still living there in 1861.  Of their children: Maria had become a dressmaker, James was a brushmaker, Edwin a grocer’s assistant, Henry was an errand boy, and Francis was still at school.  The 1871 census shows that James and Sarah were living there alone.  Sarah died aged 62 and was buried on 6th June 1873.  The 1881 and 1891 censuses show James was still working as a brushmaker.  He was living in the house on his own.  He died aged 80 on 20th February 1894 and was buried in Thornbury.

George Denman – the 1894 Rate Book shows the house was occupied by someone called ‘Denman’.  We suspect that this is likely to have been George Denman, the baker.  Click here to read more

In the 1899 Rate Book the house was listed as void, having recently been vacated by someone called ‘Bennett’.  We suspect this is one of the bakers also associated with 67 High Street

John Evomy Phelps – the 1901 census shows John was living in the house.  He was described as a surgeon’s assistant aged 46 born in Dorchester.  He was living with his wife, Alice M. aged 45 born in Wareham and their children Lilian A a dressmaker aged 22 born in Dorchester and Mabel F, a draper’s assistant aged 20 born in Thornbury.  He was still there in the 1926 Rate Book.  He probably moved away when he married for a second time in 1927.  Read more about John and his family

Francis George and Fanny Phillips – ‘George’ was born in Chepstow on 13th September 1884.  He was the son of William Alfred Phillips and his wife, Eliza.  George worked for the local council with his father and eventually took over from his father as the stream roller driver.  In 1910 George married Fanny Elizabeth Millard.  The 1918 electoral register shows that they were living in the High Street, but we don’t know where.  We suspect that they moved here when John Evomy Phelps vacated the property following his marriage in 1927. [/fusion_builder_column]

The special register compiled in 1939 in preparation for the war shows George and Fanny had Fanny’s mother, Elizabeth Millard living them. She was born on 28th February 1857 and noted to be incapacitated.  They also had a lodger, Leslie Thorne, a grocer’s assistant born on 20th April 1917.

George and Fanny carried on living here until about 1965.  Click here to read more

David and Jennifer A. Daniels – the 1970 electoral register shows that the house was occupied by the Daniels.  We don’t know any more about them.

The Goodes – in the early 1970’s the house was occupied by George and Beatrice Goode.  They had moved from Morten in the Marsh to Thornbury with their three sons in 1958.  George rented out Coronation House at 13 High Street and ran a pharmacy and optician’s business for about 12 years.  When he retired they moved to 62 High Street which they rented off the Williams family estate.  Beatrice who had been helping out in the chemist shop took over the tiny antique shop called Dovetail Antiques in Chapel Street which her son, David had started up.

Betty Bayntun – Betty was the widow of ‘Bob’ Bayntun with whom she had lived for many years across the road in 79 High Street.  Following Bob’s death in 1986 Betty moved to Cheltenham for a few years, but returned to live at 62 High Street about 1995.  She died in 2000.

The Vooghts – Michael was Vicar of St Marys Church, Thornbury for 17 years from 1985 to 2002.  After qualifying at St Peter’s, Oxford, Michel became a curate in South London before moving on to Prestbury, Cheltenham.  Here he met and married Elizabeth, a teacher in the local Church School.  They then moved to Minchinhampton, near Stroud, where Michael was the incumbent for nearly 13 years.

Since Michael’s retirement in 2002 they have lived at 62 High Street.  Both Michael and Elizabeth continue to be heavily involved in community activities, both in Thornbury and Bristol.