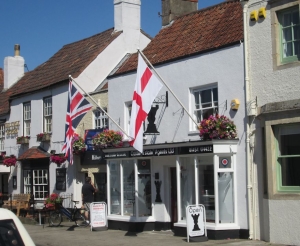 On the left we have a photo of the property which is now 63 High Street in Thornbury.  The photograph was taken in 2015.  It shows the building decorated with the two flags which are hung there regularly by the occupants, Castle Estate Agents.

We have two older photos of the building below.  These are taken from street scenes.  We apologise for the poor quality of these photos, but this house always seems to appear in the distance of all the old photos we have.  The one on the left below showing the decorated house is thought to have been taken in 1911.  We suspect the event being photographed was a procession celebrating the coronation of King George V which took place on 22nd June 1911.  In both photos number 63 is the house with the porch over the front door.

Unfortunately we haven’t seen the deeds of this property and we’re not able to write about its early history.

Mary Wetmore – the earliest owner whom we know about was Mary Wetmore whose husband, Thomas Wetmore, had owned the adjoining the property (later known as The Exchange or 59 High Street).  At some time in the 1820’s we believe Mary sold the two properties to Thomas Morgan who was acquiring adjoining properties around that period.  Certainly in Thomas Morgan’s will dated 17th September 1869 he bequeathed to his daughter Charlotte, two freehold messuages occupied by Frederick Jones Taylor and John Hawkins which he many year ago purchased from Mary Wetmore’.  Click here to read about Thomas and Mary Wetmore 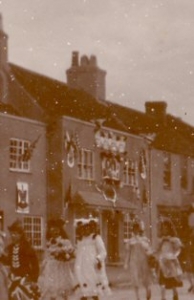 Thomas Morgan – in the 1840 Tithe Survey the property was part of Plot 152, two houses and courts both owned by Thomas Morgan and occupied by George Bindon (we suspect this should be Binden) and Thomas Harris.  Thomas owned a lot of property in this area of town.  For the reasons explained above we know that Thomas acquired the two properties from Mary Wetmore, probably in the 1820’s.  In his will dated 17th September 1869 Thomas left the properties to his daughter Charlotte.

We have no documents relating to Charlotte’s sale of these properties but we note that they were not mentioned in other documents relating to her property in 1871.  We are guessing that she may have sold the two houses to Frederick Jones Taylor (see below) in 1871 to enable her to repay some of the money owed from her father’s debts.  On 30th October 1871 Charlotte Morgan paid the executors of John Carwardine’s will the sum of £200 in part satisfaction of the £400 borrowed.  Click here to read about the Morgans

George Binden – based on the sequence of names in the survey, we assume that George Binden was living in 63 High Street.  The 1839 Robsons Directory shows George was a boot and shoemaker living in the High Street.  George was born in Thornbury on 28th March 1801 and baptised on 13th May 1801.  His parents were Henry Binden and his wife, Mary (nee Hungerford).

George and Ann had at least two children: Martha baptised on 18th April 1828 when the Bindens were living in Kington and Alfred Henry baptised on 29th October 1837 when they were living in Thornbury.  We were puzzled that we could not find any sign of the Bindons in any of the census records, nor any death record which might relate to them anywhere in England.  Then we noted a family tree posted on the Ancestry website which mentions that George emigrated to the USA which would explain the absence of any further information.  Unfortunately the family tree didn’t give any details of when or where they moved to.  On the Ancestry website we did discover one possible reference to George in the USA – in the 1849 Boston Trade Directory there is a George Binden listed as a shoemaker living at 3 Madison Place, Boston.  An entry in the IGI shows that George from Thornbury died on 13th October 1864 at Woburn, Massachusetts.

James Schollar – the 1841 census suggests that the house was occupied by James Schollar, a hostler aged 40, and his wife, Frances aged 40 and children: Emila aged 20 and George aged 7.  According to the IGI, James was born in Tetbury and baptised on 2nd September 1792, the son of Edward Schollar and his wife, Mary.  He married Frances Webbe on 29th June 1814 in St James Church in Bristol.

James and Frances had a daughter, Martha, who was baptised in Winterborne on 23rd February 1817.  They must had moved to Thornbury by 1822 when their daughter, Caroline, was baptised there on 27th February 1822.  Caroline’s baptism record shows James was an ostler and that they lived in the Borough.  Caroline died as an infant and was buried on 3rd March 1822.  Another daughter, Elizabeth, was baptised on 13th April 1823.  Martha died aged 8 and was buried in Thornbury on 8th June 1825.  We assume that there was a son, James born in Thornbury about 1825.  The 1851 census shows this James was a gaol warden in Bedminster.

The 1851 census shows the Schollars had moved to live at Redcliff Crescent in Bedminster Bristol.  James was a lodging house keeper aged 60 born in Tetbury.  Frances was aged 55 born in Hambrook.  Emily had no occupation and she was aged 35 born in Frenchay and George was aged 16 born in Bristol.  There was now one extra child, Frederick, who was a scholar at home aged 8 and born in Bristol.  Frederick was William Frederick baptised at St Marks Church in Easton in Bristol on 11th March 1857.  We had suspected that Frederick may have been Emily’s son, but the IGI notes that James and Frances were his parents.

Charles Gibbs – the 1851 census shows that house was then occupied by Charles Gibbs, a cordwainer aged 35 from Thornbury and his wife, Elizabeth aged 37 from Hill.  They had three children: Mary aged 5 who was at home, Charles aged 2 and Elizabeth aged 3 months.

Charles was baptised in Thornbury on 21st September 1817.  He was the son of William Gibbs, a labourer and his wife, Sarah who lived at Grovesend.  The minutes of the Thornbury Baptist Church in September 1837 note that Charles was excluded ‘it being ascertained that since his suspension he has been at theatrical performances’.  It should be pointed out that the Church was particularly strict on many aspects of conduct at this time.

In 1841 Charles was a journeyman shoemaker boarding in the lodging house run by Martha Cullimore at 43/45 St Mary Street.  In 1843 Charles married Elizabeth Leonard, the daughter of John Leonard and his wife Miriam (nee Hopkins).  Their daughter, Mary, was baptised on 24th December 1845.

By 1861 census, the Gibbs had moved to Rotten Row (now called Chapel Street).  They have one addition to the family, Emily who was aged 6.  Their daughter, Mary appears to be living with her great aunt, Grace Reeves, at 34 Castle Street at the time of the census.  Another son, William Leonard was born in 1861 after the census.  In 1866 the death was announced of Charles Leonard ( son of Charles Gibbs) on March 26th at Thornbury.  He was aged 16 and died after a long illness.

We are not sure when Charles died.  William went on to become a Baptist minister and moved to London.

The Jones – the 1859 Rate Book shows that Frederick Jones was then renting out the house from Thomas Morgan.  By 1876 he had bought the house and the adjoining house (61 High Street).  In 1884 he bought the property on the other side, which was the Queens Head pub.

The history of the Jones family is quite complex and we are grateful to a family member, Susan Jones, who has helped us sort out the problems arising from the family’s tendency to use different surnames.  Click here to read about the Jones-Taylors

Frederick Jones (snr) died on 16th January 1894 aged 82.  The 1894 Rate Book shows that the Queens Head had now been sold, but the other two houses were now owned by ‘F. Jones’, presumably Frederick’s son.  The 1905 and 1910 Rate Books show that both 61 and 63 High Street continued to be owned by ‘F. Jones’ with Frederick living at number 63, presumably with his sister, Ellen, living with him.  They were both there in the 1911 census which describes Frederick as a commercial traveller in the drapery trade and Ellen as ‘housekeeping for brother’.  Interestingly the Rate Book shows that ‘F. Jones’ also owned 46 High Street, although the abstract of title of this house shows it had been conveyed to Ellen Jones for £130.

Frederick died on 10th February 1914 aged 71.  On 22nd October 1919 Ellen put both her houses up for sale at auction.  The house at 63 High Street was described as ‘the dwelling house which is in the occupation of Miss Jones, the owner, contains two front sitting rooms, kitchen, pantry four bedrooms and box ditto, and large shed used as wood or coal house at back.  There is a good supply of soft water on the premises‘.

It appears that Ellen sold the two houses (61 and 63 High Street) at the auction because in a 1920 document relating to the Exchange Hotel Ellen’s name is crossed through and replaced by ‘W. H. Phillips’.  The 1925 Valuation list shows the two houses were owned by W. H. Phillips, and Ellen Jones was living in 46 High Street. William Henry Phillips was born in Thornbury on 11th April 1886, the son of William Alfred Phillips and his wife, Eliza (nee Cole) who for many years lived at their home at 3 Upper Bath Road.  William became known as ‘Harry’.  He enjoyed playing the cornet and whilst at the Grammar School he regularly played the Last Post at the annual Remembrance Day service.  Harry was a painter and decorator and in 1920 he married Bertha Stone, the daughter of George and Eliza Stone.  Harry went into partnership with Robert Mills.  The Phillips used the front of their house in the High Street as a shop and it became the place to go to buy wallpaper.  We understand that their equipment was stored in Robert Mills place at 28 Castle Street.  Harry is remembered smoking a pipe whilst applying the lead paint and he said that drinking milk was necessary to keep painters healthy!

George Stone was a deacon and elder of Thornbury Baptist Church and Bertha was the organist and Harry, the choirmaster there and played the cornet in the Baptist Church Brass Band.

Harry and Bertha had one daughter, Rachel born in 1921.  Rachel married Harry E Aplin, the electrical contractor in 1942.  The photo on the right shows Harry and Bertha outside number 3 Upper Bath Road, although they lived at 63 High Street.  This house had the unusual name ‘Gilgandra’ – we were curious as to how the house got this name and suspected that there might be a connection to the place by that name in New South Wales, Australia.  Then, it was discovered that William Henry was mentioned on a website listing the Australian Anzacs in the First World War.  It shows that William Henry was out in New South Wales in 1915.  He enlisted in the 36th Battalion of the Australian Army in Dubbo, New South Wales on 24th August 1915.  Dubbo is only 23 miles from Gilgandra so presumably that is where William was living at the time.  The army record shows he was a painter, single and Baptist by religion.  His next of kin was shown as William Phillips of Thornbury, Gloucestershire, England.  He embarked for the War on the Australian transport ship, Beltana sailing from Sydney on 13th May 1916.  He survived the war and was demobbed on 11th August 1919.

In more recent times, the property became the local agency of the Cheltenham and Gloucester Building Society and then the Castle Estate Agents.  We understand that the current owner is Mrs Yeend.