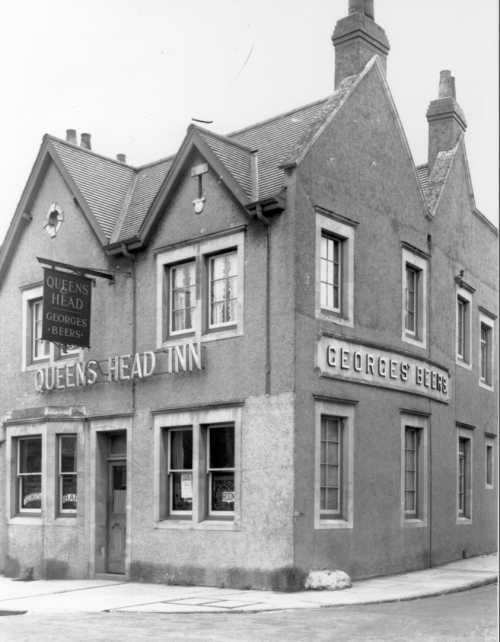 Note the rock standing at the right hand corner of the building in the photograph above.  This rock is still there today.  It is thought that it was there to prevent damage to the building caused by vehicles making the sharp turn from the High Street into Chapel Street.

Unfortunately we haven’t seen the deeds of the property and we don’t know anything much about its early history, except that the 1670 Rent Roll lists ‘M. Goslett‘ as being ‘at the corner of Rottne Row’.  We’re grateful to Meg Wise of Thornbury Museum who has shared with us her collection of deeds relating to The Exchange and the neighbouring properties.  The earliest reference in these documents is dated 26th March 1765 when Nathaniel Hieron of New Mills, Wiltshire, a skinner and fellmonger (which is an old name for a furrier), sold the property to Enoch Parslow, a yeoman from Kington. 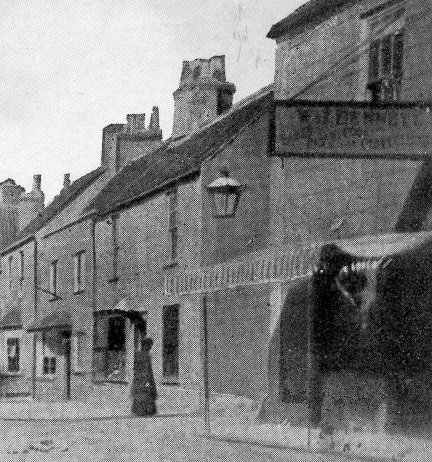 About 1905 before it became the Queens Head

The Caddys – on 25th March 1769 Enoch Parslow sold the property to Ann Caddy, a widow of Thornbury.  On 30th September 1775 Ann conveyed the property to John Hopkins, a tailor of Berkeley who was described as Ann’s son.  We assume that Robert was the child of any earlier marriage of Ann’s although we have found nothing to confirm this.   Click here to read about Ann Caddy

On 15th October 1769 John Hopkins married Mary Prewett in Thornbury.  On 29th September 1788 John Hopkins conveyed the property to Robert Caddy a yeoman, whom we assume to be another of Ann Caddy’s sons.  There was an associated bond of indemnity agreed by the two parties to insure against the possibility of John’s wife, Mary, making a dower claim on the property.  On 20th December 1775 Robert married Ann Allen in Thornbury.  Click here to read about Robert Caddy

On 10th October 1791 Robert Caddy sold the property to James Knapp, a blacksmith.  A similar bond of indemnity was agreed between Robert and James against Robert’s wife, Ann, having any dower claim on the property.

The Knapps – on 10th October 1791 James Knapp bought the property from Robert Caddy.  James was a blacksmith.  He was baptised on 30th October 1757, the son of James Knapp senior, another blacksmith and his wife, Elizabeth (nee Hobby).  James was the brother of William Knapp the elder, another blacksmith.  On 5th November 1782 James married Elizabeth Child in Thornbury.  They had at least four children, Elizabeth, Sarah, William and James although we can only find the baptism record of Elizabeth and James.  Elizabeth was baptised on 29th January 1783.  James was born on 1st July 1790 and baptised on 21st July 1790.

James’s wife died suddenly aged 49 and she was buried on 30th January 1806.  James died aged 49 and was buried on 28th January 1807.  In his will dated 23rd January 1807 James left his messuage, dwelling house with the shop outhouses gardens and appurtenances where he was then living on the east side of the High Street to his two daughters, Elizabeth and Sarah.  He left bequests of £150 to each of his daughters.  His two sons, William and James were allowed to reside in his house for a year after his death without paying any rent.  William was also left the residue of his father’s goods, chattels and personal estate and made sole executor.

On 28th November 1812, Sarah Knapp, her sister, now Elizabeth Whitfield and her husband, Jonah, a miller, sold the property to Mary Wetmore, a widow.

Mary Wetmore – on 28th March 1835 Mary sold the property to Thomas Morgan.  Mary had acquired ownership of several properties around this part of town.  Click here to read about Mary Wetmore

Thomas Morgan – the 1840 Tithe Survey which shows the property was one of several properties in the area owned by Thomas Morgan.  This one was occupied by George Shepherd.  Thomas was a bit of an enigma.  The census records show him as a farmer in 1841 and a plasterer and painter in 1851.  By the time of the 1861 census he was listed as a land and house agent.  He certainly acquired quite a bit of property around Thornbury, particularly around the top of St Mary Street, Chapel Street and the area of the High Street around what is now known as The Knot of Rope.  The 1840 Tithe Survey shows that Thomas owned most of the block stretching from what is now the Knot of Rope up to the corner of Chapel Street, the properties in Chapel Street between the High Street and St Mary Street and the properties in St Mary Street backing on to those mentioned as being in the High Street.  He still owned these properties at the time he wrote his will in 1869.

At the time of the 1861 census he was living in a tall gabled ended building which now forms the left hand part of the Knot of Rope which at time wasn’t connected to the adjoining properties.

When Thomas made his will on 17th September 1869, he left Eliza Tanner a property in the High Street then occupied by Hugh Smart (which was The Queens Head Tavern) and three freehold cottages in Rotten Row (Chapel Street) occupied by William Harvey Daniel Gough and John Williams.  These cottages were the buildings since converted and now used as an opticians.  Thomas Morgan died 20th December 1869.  Click here to read about Thomas

According to local pub historian, George Ford, the occupant of the property, Hugh Smart obtained a licence to sell beer in addition to groceries in 1858.  The 1881 census shows the beerhouse had now been given the name ‘Queens Head‘.

Eliza Tanner – Eliza inherited the Queens Head following the death of Thomas Morgan who died on 20th December 1869.  She also inherited from Thomas three cottages in Chapel Street to the rear of the Queens Head.

Eliza was born about 1818, the daughter of Thomas Morgan and his wife, Sarah (see above).  Eliza married James Tanner in Clifton, Bristol in the June quarter of 1844.  They had a son, Edwin Morgan Tanner born in Marylebone in 1845.  Eliza’s husband died before the 1851 census as she was a widow that time.  There are several possible deaths of James Tanner in that period, including several in the London area.  There is one possible death in Thornbury, that of James Tanner who died aged 45 and was buried on 28th December 1845.

In the 1851 census Eliza Tanner was a 32 year old widow working as a milliner and dressmaker in Marylebone in London.  Her son, Edwin, was living with Eliza’s parents in 2 St Mary Street, Thornbury.  Edwin died in Thornbury in 1857 aged 11 years and was buried on February 2nd.

We don’t know if Eliza ever lived in Thornbury in the early part of her life.  She had moved to live in Thornbury by the time of the 1880 Rate Book and the 1881 census shows that Eliza Tanner was living at 50 High Street a house owned by Elizabeth Ford.  The census shows she was a widowed annuitant aged 63 living with a servant Mary A Prewett aged 19.

In Eliza’s will dated 16th June 1879 she said:  “Bury me in the Congregational Chapel burying ground and use the Hand Hearse – 4 poor members of the Cong. Chapel to be bearers & to get 10 shillings each.”  She left  to her niece Sarah Kiddle wife of James Kiddle of Bristol, Chemist, three freehold cottages in Chapel Street “to be free from the debts, control & engagements of her present or any future husband but subject to the payment of £19 19s to Mary Ann Prewett daughter of Joseph Prewett”.   She also left “To Emily Eddington daughter of the late William Eddington of Thornbury (deceased), 6 silver teaspoons, 1 table spoon & fork marked E.T. and part of my wardrobe; to Sarah Robinson wife of George Robinson of Slimbridge, farmer, a mosaic & fill Box; to Augusta Holloway a small blue enamelled & fill box and to the said Sarah Kiddle part of my wardrobe.  Everything else to her friend William Frederick Nalder of Thornbury and he is appointed executor”.

Eliza died on 7th June 1884.  On 5th November 1884 the property was sold at auction.  It is interesting that in the advert promoting the auction the property was described as a dwelling house not a pub.  The full description says

‘All that freehold messuage dwelling house garden and premises known as the Queens Head, ….. in the occupation of Mr Hugh smart.  The dwelling house contains shop, parlour, kitchen, pantry, and underground cellar, three bedrooms and a small room.  And also all that yard as marked out, and to be divided by a brick or stone wall by the purchaser, of not less than 15 inches in width and 7ft in height, with the stable and gig house, adjoining to the above described premises, and to Chapel Street in the occupation of Mr. J. M. Michael.’

In George Ford’s book ‘Thornbury Pubs’, George assumed that R. W. Miller and Co. Ltd bought the pub at the auction in 1884, but the Petty Sessional records show they took it over in 1890.  We have a copy of a newspaper notice saying that it was Frederick Jones who bought the pub at the 1884 auction and Frederick’s name is listed as the owner in the 1885 Rate Book.

Frederick Jones – Frederick paid £400 for the Queens Head at the auction held on 5th November 1884.  Frederick was a commercial traveller who already owned the two adjoining properties, numbers 61 and 63 High Street.  He doesn’t appear to have ever lived in the pub and he allowed Hugh Smart to continue to manage it until his death in 1888 and then William Underhill to carry on after that.  He finally sold it to R. W. Miller & Co. Ltd, brewers of Stokes Croft, Bristol in 1890.  Click here to read about Frederick

We note the Petty Sessional Court records show that the Queens Head was licensed to sell beer, cider and perry, but not on Sundays.

R. W. Miller & Co. Ltd of Bristol – in 1890 the Queens Head was one of two pub bought by R. W. Miller & Co. in Thornbury.  The other was The Horseshoe in St Mary Street.  Millers were a firm of brewers from Stokes Croft in Bristol.

Millers were taken over in 1911 by Georges Brewery in Bristol.  Just before being taken over Millers put forward plans for re-developing the Queens Head and these were implemented by Georges.  The changes provided a more impressive external facade and better accommodation for the landlord.  The improvements resulted in an enlarged public bar (by combining the old public bar and private bar into one room), a separate smoke room and kitchen downstairs, and upstairs there was a sitting room and the number of bedrooms were increased from three to four by building an extra one over the kitchen.

It remained a Georges pub until it was closed in 1958 due to its small size and falling trade.  We have a copy of a sales notice dated 1956 which seems to allow for the pub being used as a pub or for residential accommodation.  It describes the property as: ground floor comprising bar or lounge, smoke room or living room, kitchen and small back kitchen.  The first floor had four bedrooms and one bathroom.

Since closing, the building has been used as a doctor’s surgery and then offices by various businesses including Burton Sweet accountants and in 2000 by Richmond Group Financial Advice.  In October 2008 it opened as ‘Blends‘ which describes itself as a ‘Cafe Lounge’.  It was an interesting mix of coffee bar, bistro cafe and wine bar, providing something for everybody.  It was pleasing to see that in selling draft and bottled beer it is continuing the tradition started in 1858.  However, it didn’t last too long and in 2013 was replaced by a ladies hairdressing salon called Joelle Hairdressing.

Click here to see the OCCUPANTS of 65 High Street