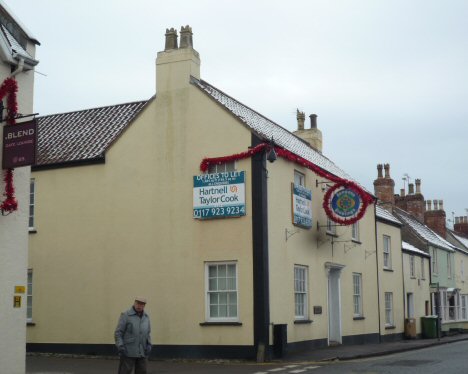 This property stands on the corner of the High Street and Chapel Street.  It comprises a large rambling building with a lot of rooms.  Out back is a yard and another building.  We don’t know when the property was first built, but it has been re-built at least once and had several major changes to its construction.  We are fortunate to have copies of an abstract of title which shows that in the 1700’s it was a public house known as ‘The Cock’.  The earliest reference to the property shows that in 1739 it was owned and occupied by Richard Powell, but this documents refers to several other people associated with the property earlier than this date.

The Inn – the property was run as a inn for over 100 years.  During that time, the name of the inn was changed three times.  It was called The Cock in the earliest records we have seen dating from 1739.  In 1779 the owner of the property bought the building next door, he demolished it and extended the public house.  Around 1811 it was re-developed again and a large club room was added.  The name of the pub was changed appropriately to the New Inn.  Finally in the 1840’s it was given the name of the Beaufort Arms.  We know that for much of the time it was used as a pub, the inn brewed its own beer in a little brewery.  We believe it finished being a pub around 1847 when the property was bought by James Screen, a local baker.

Click here to read about the New Inn and Beaufort Arms

The Bakery – from 1847 for over 100 years the property was run as a bakery .  The main building formed the shop with residential quarters for the families above.  The ovens for the bakery were in an outbuilding in the rear yard and there was a flour store there as well.  In the 1900’s the shop incorporated a cafe and refreshment rooms.

Charles Bodenham – we have been told a dentist called ‘Bodenham’ ran his surgery in a small building in the rear of the premises.  Apparently he lived in Bristol and only came to Thornbury on certain days of the week.  The trade directories list Charles Bodenham in 1914 as an artificial teeth maker who attended on Wednesday.  Later directories from this time up until 1938 show his name as Edward Charles Bodenham or James E. Charles Bodenham as dentist open on Wednesday and Fridays.  We assume these to be the same person.  One local person recalled that Bodenham was silver-haired and rather smart.  He brought with him a dark-haired nurse who always dressed in a ‘Florence Nightingale’ uniform.  He used a foot-treadle drill even though electricity was in use in the Town.

After the Thompsons bakery ceased trading there in 1959, the building was under used for the long period.  On 25th March 1959 Dennis and Henry Thompson sold the property to Christofer Bell Ltd.  They may have continued using it as a bakery for a time.  On 20th April 1964 they sold the property to Malgavita Limited.  We are not sure what business they were in nor what they used the property for, but it was sold on 25th May 1967 to Malga UPM Ltd, who sold it on to Chetwynd House Investment Co. Ltd on 15th April 1971.  They sold it to Stroud Creamery Ltd on 11th February 1974.  We understand that the residential accommodation was used by various families during this period. Stroud Creamery Limited sold the property to Thornbury Town Council for £20,000 on 31st March 1978.  The Council leased the red bricked bakery building and the yard in the rear back to the Stroud Creamery for use as a dairy.

Thornbury Town Council – the property was acquired by the Town Council for £20,000 on 31st March 1978.  They initially leased the bakery in the rear and the yard to Stroud Creamery for use as a dairy.  In 1983 the main building was opened as the offices of Thornbury Town Council with Council Chamber, office accommodation and residential flat.  The former bakery in the yard at the rear was refurbished for use as a meeting/activity room in 1985.  This facility is now known The Old Bakery Annexe.

In 1992 the Council acquired the old Police Station and Court House on the High Street and they moved the council offices there in 1994.  Since that time one or two businesses have leased the premises from the Council.  We know of CWR Constable Insurance in 2000 and Nine Direct (Intelligent Resourcing) in 2009.  It is currently used by Age Concern.