The land tax record of 1810 shows that even before the death of Elizabeth Grove in 1811 the Cock had become the property of her nephew, William Cowley.  The notes on the land tax record say “late cock rebuilding”.  When completed the pub was given the name of The New Inn.

William Cowley – William was born on 17th June 1768, the son of William Cowley and his wife, Mary (nee Grove).  William’s father had bought the Cock in 1773 and left it to his nephew, Ralph Grove.

William was probably living in Thornbury Cottage in Kington Lane until about 1809.  He was left two properties by his wealthy uncle, Kingsmill Grove, in his will dated 1811.  Kingsmill had built up a business based on paper-making and he owned three paper mills in the Wye Valley and a warehouse and other property in Bristol.  He left William ‘all that leasehold messuage or dwelling house by me erected and built late in the tenure or occupation of my nephew Kingsmill Grove with the papermill called the Middle Mill dryinghouse finishing room and other outhouses buildings offices and the garden orchard and appurtenances thereto belonging and to a close of meadow or pasture ground called the Mill Meadow containing about six acres all which said premises are situate and being in the parish of Llandogo in the County of Monmouth and now in the tenure or occupation of John Brown as tenant’ and secondly ‘my loft or warehouse situate in the parish of Saint Thomas and City of Bristol in a certain street there now called Bath Street but heretofore called Tucker Street and which I bought and purchased of and from the Trustees of Henry Cotton deceased and which is now in the possession of Thomas Vining and sons and all other my real estate in the said parish of Saint Thomas ‘.  We don’t know what William did with these properties, although we note that in an indenture dated 1822 he was referred to as a ‘stationer of Bristol’.

William was Mayor of Thornbury 1817/1819.  An indenture dated 4th and 5th June 1822 shows William was indebted to Bluett Jones of Iron Acton, gentleman and Charles Augustus Helm of Bedwardine in the County of Worcestershire, gentleman for £1250 and the property was put up as a security against the debt.

The property was described as ‘All that messuage tenement or Inn formerly called or known by the sign of the Cock situate in the Town of Thornbury together with the stable garden and other appurtenances thereunto belonging but which said premises are now better known and described as consisting of all that newly erected messuage tenement and public house called the New Inn with a large club room stables yard garden and other hereditaments adjoining and now occupied therewith the same having been erected by the same William Cowley on the site of the premises before mentioned and devised to the said William Cowley by the will of his uncle Ralph Grove deceased situated standing and being in the Town and Borough of Thornbury aforesaid and now in the occupation of George Williams as tenant thereof’.

William died aged 54 and buried on 5th July 1822.  We are puzzled by the land tax records of 1823 to 1831 which show the property owned by ‘Eleanor Cowley’.  We are not sure if Eleanor was another name used by William’s wife, Mary, or a different person.  Mary Cowley is mentioned again as being William’s widow in an indenture dated 28th and 29th September 1831 in which the property was being sold to Edward Doward (see below).  The 1832 land tax record shows that the property was owned by the ‘late Eleanor Cowley’.

The land tax records show that the New Inn was occupied by George Williams from at least 1814 to 1831.  In 1832 Edward Doward became the owner.

Edward Doward – on 28th and 29th September 1831 a indenture of lease and release between Bluett Jones of Iron Acton and Charles Augustus Helm of Bedwardine in Worcestershire, Mary Cowley, widow, Edward Doward of Alveston innkeeper and William Gunter of Alveston yeoman.  An indenture dated 25th March 1833 shows Edward borrowed £500 from Elizabeth Eley.  By 19th October 1839 this principal sum and interest paid off.

Edward was one of the Dowards of Alveston.  The 1841 census shows one Edward Doward (a farmer born about 1789) living with his wife, Virtue, in The Street, Alveston.  However, we suspect that the Edward associated with the New Inn was the farmer’s son, the Edward Doward born about 1809.  The 1842 trade directory shows the Edward as publican at The Ship Inn, Alveston.  An advertisement in the Bristol Mercury in 1844 mentions three closes of land near to The Ship which were rented by Edward Doward from Thomas Wetmore.  The 1851 census shows it was the younger Edward who was innkeeper at The Ship and a farmer of 40 acres employing 2 labourers.  At that time he was unmarried aged 42 and living with his brother, Alfred aged 30 and a housekeeper, Esther Brown, aged 42.  In 1856 Edward married Esther.  Edward died on 21 May 1860 aged 51 and the 1861 census shows his widow, Esther, was the innkeeper at The Ship.

We are not sure if Edward ever ran the New Inn.  The 1832 land tax record shows William Knapp as the tenant of the New Inn.  The abstract of title also shows Abraham Cole and then Henry Weeks were publicans there whilst Edward was the owner.

The 1840 Tithe Map shows Edward Doward as the owner and Henry Weeks as the occupant.  This information must have been collected at some time before 1839 when Edward sold the property to Jeremiah Clowes for £1000.

Jeremiah Clowes (in some records shown as Jeremiah Clews) – Jeremiah was initially living at the New Inn and running it on behalf of the owner, Edward Doward.  He was certainly there in 1839 when his daughter was born and he is listed as licensee there in an 1839 trade directory.

The 1841 census shows Jeremiah had a tenant, Charles Barber, running and living in the New Inn.  Jeremiah and and his wife, Catherine, were living at The Street, Alveston and that Jeremiah was described as a gardener.

By 19th December 1845 Jeremiah had defaulted on the repayment of the loan and William Cox took possession and sold property to Oliver George Mowatt innkeeper of Thornbury for £525 paid to William Cox.  This indenture shows that the name of the inn had previously been changed from New Inn to Beaufort Arms.  Click here to read about Jeremiah and his family

Oliver George Mowatt (in some records shown as Oliver George Mowat) – on 19th December 1845 Oliver purchased the Beaufort Arms from Jeremiah Clowes for £525.  The indenture describes Oliver as an innkeeper of Thornbury and implies that he had been running the pub previously as a tenant of Jeremiah’s.  Oliver borrowed £100 from William Cox on 20th December 1845 to help him make the payment.  On 8th April 1846 Oliver borrowed another £200 from William Cox. 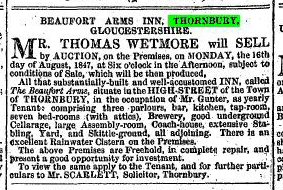 We have been unable to find out much about Oliver during his time in Thornbury.  In December quarter 1845 Oliver married Ann Boon in Thornbury.  They may not have stayed here long.  There are two census records showing Oliver George Mowatt, now a journeyman saddler living in Lambeth in London in 1861 with Ann who was born in St Marylebone, London about 1821.  They were living in Birmingham in the 1901 census.  Both records indicate Oliver was born in Cardiff about 1824, although the 1861 census also mentions Montpelier Bristol as his place of birth.  The IGI shows he was born on 25th December 1823, the son of George Mowatt and his wife, Esther and baptised on 19th August 1827 at St John Wesleyan Church, Cardiff.  Oliver died in Birmingham in 1908 aged 85.

On 16th August 1847 Oliver put the Beaufort Arms up for sale at auction.  The sale notice describing the property is shown on the right above.  We also have the advertisement listing his personal property which was also sold.  We know from an indenture dated 4th October 1847 that James Screen bought the property for £636 6s 0d.  Oliver Mowatt had paid the interest on the loan from William Cox he had to repay the principal sums of £100 and £200 from the money he received from James Screen.

After 1847 the property ceased being a pub and the licence and name of the Beaufort Arms were transferred to a property further down the High Street (now the site of 57 High Street).  The property on the corner of Chapel Street became a bakery and traded as such for the next 100 years.