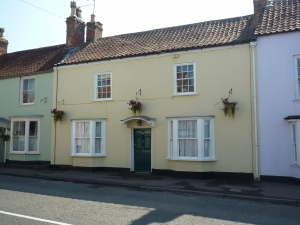 Of those named, Catherine Cook was also mentioned in the Court Roll of 1759.  She was one of several people required ‘to remove and carry away the muck weeds and rubbish standing and lying before their doors within this Borough to be moved and carryed away in Fourteen days after the date hereof on pain of five shillings each’.

We suspect William Reed is the same person connected with the Seven Stars beerhouse. 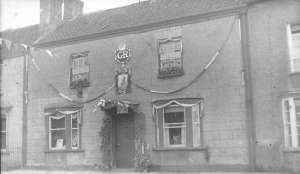 Benjamin Addis – was probably the one who died in 1792 aged 93 and described then as an alderman.  He was a cooper and in 1749/50 he was Mayor of Thornbury.  Benjamin’s first wife was Rachel who died in 1754 aged 60 years.  His second wife was Hester Osborne, the daughter of William and Martha Osborne.  They married on 14th February 1763.

In 1758 Benjamin was brought before the Manor Court in his capacity of Surveyor of the Highways for the Borough of Thornbury.  He was warned that he must ‘have the loose stones pic’t up and carryed away out of the streets of the said Borough to be done within one month’s time on pain of five shillings for neglect’.  In 1759 he was back in court having failed to do what was required.  He was given another month to do so ‘on pain of six shillings and eight pence’.

We think that Benjamin was the one who was listed as a tenant of Ralph Grove living at 55 High Street in the 1783 and 1784 land tax records. 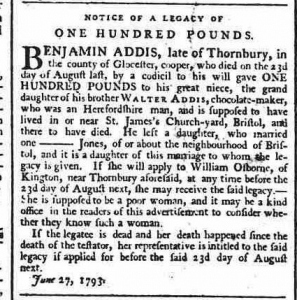 In Benjamin’s last will and testament dated 1790, he left his assets to his brother-in-law, William Osborne and to George Rolph for them to convert them and then make various financial bequests to friends and distant members of his family.  It appears that his closest relative surviving at that time was his niece, Elizabeth Watts of Olveston and two sons of his late nephew, William Addis, a cooper of Olveston.  Benjamin amended the will adding a codicil in which he requested his trustees to trace a grand-niece, the grand-daughter of Benjamin’s late brother, Walter who was a chocolate maker in Bristol.  If they were successful she was to receive £100 from Benjamin’s estate.  George died shortly after Benjamin Addis so it was left to William Osborne to track down the un-named grand-niece.  When no-one came forward to claim the money, William advertised in several local papers.  We have an example of one such advertisement that appeared in the Gloucester Journal.  Please click on the thumbnail to see a larger image.  Susannah, the wife of Mark Haggard came forward and successfully claimed the money.

It is only from the time of the 1840 Tithe Survey that we have a detailed knowledge of the house, its owners and occupants.  In 1840 the house was owned by Francis Gibbs and occupied by Joseph Collings.

According to Dr Dowler, the author of the book ‘Gloucestershire Clock and Watchmakers,” Joseph traded in Thornbury from 1836 to 1842.  Click here to read about the Collings family of clockmakers

William Chambers – by 1851 the house and shop were taken over by William Chambers, a master shoemaker from Alveston.  The 1859 rate book shows William owned as well as occupying the premises.  It was to remain in the family for a long time.  Click here to read more

The rate books indicate that when William Chambers died in 1891 the property was taken over by his eldest son, William Oliver Chambers.  He never lived here, but let it out to tenants until his death in 1916.  We are not sure how the property was passed on, but in 1919 and 1930 it was shown to be owned by Miss Fanny Marshall Chambers.

Based on her middle name we suspect this must be a descendent of William Oliver Chambers (who married Sarah Marshall in 1861), but we have no other record of anyone with that name.  However the 1926 rate book lists ‘M. Chambers’ as the owner and we had assumed this to be Maurice Chambers who lived at Rosemount and who owned other property in Thornbury at that time.

Frederick William Nalder – he was living in the house according to the 1899 rate book.  In the Bristol Mercury of July 29th 1899 there was an announcement that Frederick William Nalder had “given up housekeeping” and was selling his furniture which was listed in the advertisement.  However, the 1901 census also shows him living still there.  He was an unmarried coal merchant aged 53 from Newbury in Berkshire.

Frederick, or William as he was sometimes called, appears to have been brought up in Donnington, Berkshire by his grandparents, Thomas Nalder, the Master of Donnington almshouses and his wife, Mary.  He was living with them in both the 1851 and 1861 censuses.  By 1871 he had come to Thornbury where he was working as a solicitor’s clerk aged 25.  He was boarding in the house of William Chambers (see above).  In 1879 he was mentioned in the will of Eliza Tanner when she referred to him a friend and appointed him as sole executor and left him the residue of her estate.

The 1881 census shows he had moved to live in the house later known as 79 High Street.  He was sharing this with his unmarried sister, Frances, aged 52.

The 1891 census shows him living with his brother, Robert John, in Talbot House, Wells Road, Bristol.  Robert John was a railway accountant aged 57 from Newbury and William Frederic was a solicitor’s clerk aged 42.  The 1894 rate book shows that he was back in Thornbury living in the house later known as 60 High Street, then owned by Alfred Burchell.

The Thornbury trade directories from 1895 to 1904 show him as an accountant in the High Street.  We don’t know what happened to Frederick after the time of the 1901 census.

George Isaac Barrett – the 1905 rate book shows that George was occupying the house.  George was born in Thornbury in 1846, the son of Mark Barrett, a blacksmith and his wife, Dinah (nee Lewton).  The family family were living at Buckover outside of Thornbury for most of George’s younger life.  By 1861 George had also become a blacksmith.

George married a Thornbury girl called Eliza Barrett in Cardiff in 1867.  Eliza was the daughter of Alfred Barrett, a farmer from Kington, and his wife, Betsey.  The 1871 census shows George and Eliza were living in Wales shortly after their marriage and were living in Knole Street, Llandaff.  George was working there as a blacksmith.  They had a daughter, ‘Mable’ aged 3 who was born there.

The 1881 census shows George had become a ship repairer.  He and Elizabeth were living at 16 Mount Stuart Square, Cardiff with five children: Minnie Julia born in 1872 and Lilly Maud born in 1874, Beatrice Louise born in 1877, Alfred George L. born in 1878 and Emily Laura born in 1880.  They were still living there in 1891 although they now now had two extra children: Gertrude May aged 8 and William aged 3.  Their daughter, Emily Laura had died in early 1891 and was not shown in the census.  Also living in the same house were George’s brother, William an engine fitter aged 34 and George’s widowed mother, Dinah aged 68 and a general domestic servant Jessie Phillips aged 21.

Eliza died in Cardiff in 1899 aged 53.   On 16th August 1900 George married again at Clifton.  His second wife was Selina Wingfield who was aged 35 and the daughter of Samuel Godard Wingfield.  We couldn’t find them in the 1901 census but we’re grateful to a descendant, Anne Taylor, for finding them listed in the Ancestry website under the name of ‘Darrett’.  They were living at 16 Richmond Terrace, St Andrews, Cardiff.

George died on 22nd April 1907 aged 61 in Thornbury.  The memorial printed in the Western Mail says he had worked for many years as an engineer and shipwright at Cardiff East Bute Dock.  Selina moved to Birmingham where she died in 1947.

Richard and Veronica Mitchell – we understand that the Mitchells had moved to Thornbury from Leicester in about 1975.  Richard was a photographer for the Evening Post.  They were only in the house for a few years before they returned to Leicester.

We do not know anything about the house after that time.