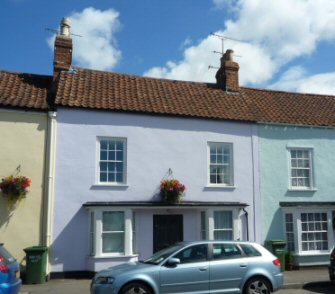 We are grateful to Jane Willson for allowing us to see her large collection of deeds that relate to this and the adjoining houses in the High Street in Thornbury.  They indicate that for most of the time since being built the row of five houses (73 to 81) were owned by Cossham family and were probably built by them.

We can’t say for sure when each house was built.  All five were listed in the 1840 Tithe Survey.  The deeds of the property show that the five houses were erected on a large piece of property fronting the High Street and extending from Chapel Street to the area where the Railway Station was later built.  Click here to read about the early history of this plot

This plot comprising a messuage, barn, stable, slaughterhouse, garden, orchard and paddock known as the Town Orchard was bought by George Cossham on 1st/2nd October 1782.  It seems unlikely that George Cossham developed this property in his life time as his will of 1785 shows that he left it to be divided into two parts and shared by his sons Richard and Jesse.

We believe that the part George gave to Jesse was used by him, (or his son, George Cossham who inherited the property from Jesse in 1797), to build the houses now known as 73 – 81 High Street.  We don’t know if the original house was used in this development or whether it was demolished.  From George Cossham the houses were passed to his nephew, Edward Wise (alias Wisse) in 1876 and then to Edward’s daughters, Charlotte and Ann Wise (alias Wisse).  Thus the house was owned by the Cosshams or their descendents up to 1938.  Click here to read about the Cosshams associated with the house

For most of this time the house was rented out to tenants.  We are fortunate that the rate books, census records and electoral registers give us a good idea of who lived in the house.

The earliest knowledge of who lived in the house comes from the 1840 Tithe Survey.  This shows the house was occupied by Charlotte Cossham.

Charlotte Cossham – Charlotte was born in 1798, the daughter of Jesse Cossham and his wife, Ann (nee Child).  In the 1841 Census Charlotte was listed as living in the house and she appeared to be running it as a private school.  She was described as a schoolmistress and there were six children living with her in the house.  At the time of the 1851 Census Charlotte had only three pupils living there.  The 1861 Census shows Charlotte had retired from being a schoolmistress.  She was now sharing the house with Edwin Wathen, a baker aged 23.  She was listed as the occupant in the 1862 Rate Book.  Charlotte died in 1868 aged 70.

Thomas Morgan – the 1871 Census shows that Thomas Morgan, a plumber aged 29 from Rockhampton was living in the house with his wife, Anna Maria aged 28 from Thornbury and children: Mary Ann aged 6 and John Trevor aged 4 and Arthur Henry aged 2.  Ann Morgan, a staymaker aged 50 was also lodging there.  Click here to read more

George Fry – the 1876 rate books and later rate books and census records show George Fry, a tailor, living here with his wife, Elizabeth until about 1900.  The 1901 Census shows that they had moved to 22 High Street.  Click here to read about the Frys

Mrs Elizabeth Jefferies – the 1901 Census shows the house was occupied by Mrs Elizabeth Jefferies, a widow, aged 57 and four of her daughters: Ellen aged 24, Priscilla aged 22, Lucy 14 and Alice aged 12, all born in Olveston.  The census shows that Elizabeth, Ellen and Priscilla were all working as laundresses.  There were also two boarders living in the house, both of them railway men.  Elizabeth had moved to Thornbury to live next door to her daughter, Catherine, the wife of Frank Cullimore Poole, who was living next door at 75 High Street.

Elizabeth Griffin was born about 1845.  She married James Jefferies, a coachman in Olveston in 1867.  James and Elizabeth had a large family of eight children, but James committed suicide on 19th July 1890, leaving Elizabeth to cope in bringing up the family.  The 1891 Census shows the family living in a cottage in Rudgeway.  Elizabeth was a widow aged 45 living with the eight children.  Only her son, Charles who was working as a coachman and her daughter Gertrude aged 17 who was a laundress are listed as working.

We know from the 1905 and 1910 rate books that Elizabeth continued to live at 73 High Street.  She died aged 65 and was buried in Thornbury Cemetery on 2nd December 1910.  The house was taken over by her daughter, Priscilla and her husband, John James Logan (see below).

John James Logan – the 1911 Census shows that John was living in the house with his family.  John was a compositor aged 38 from Holbon in London.  He was living with his wife, Priscilla aged 31 who was born in Tockington and a sister-in-law, Alice Jefferies aged 21 and an adopted son, Jack Jefferies aged 5 who was born in Portsmouth.  John had married Priscilla Jefferies in 1907.  The 1912 Prewetts Directory shows Mrs Logan was working as a laundress in the High Street.  They appear to have moved to the Bristol area by 1914 when they had a daughter Elizabeth.

Dennis Edward Beszant – the 1926 rate book and 1927 electoral register show Dennis Edward and Eva Florence were the occupants of the house.  They were still living here in 1930 when their son, Kenneth, started at Council Upper School.  At that time the house was known by the address of ‘5 High Street’ when this row of houses were numbered from the top of the town.

We don’t know how long the Beszants lived at 73 High Street as they continue to be listed as having a High Street address, but they are known to have lived further down at 47 High Street and we don’t know when they moved.  Click here to read more

Ethel Selina Garn – when the house was put up for sale in September 1938 it was occupied by Ethel Garn.  She had moved there from the Mumbleys following the death of her husband.  She was still listed in the Mumbleys in 1935 electoral register.  Following the sale of the house to the Ball family, Ethel moved to 14 Gloucester Road.   Click here to read more

On 14th September 1938 the representatives of the previous owner, Ann Wise (or Wisse), put the property for sale at auction.  It was described as:  ‘a dwelling house with a large garden, situate in High Street in the occupation of Ethel Garn at a rental of £6 per quarter.  Tenant paying rates.  The house contains two front sitting rooms, kitchen, pantry, wash-house with sink and boiler, four bedrooms and attic over.  Outside W. C. Electric Light Gas and Company Water.  Bounded by Lot 2 and properties belonging to Messrs Bartlett and Chambers’.

The Balls – on 27th October 1938 the house was bought by Ernest Frederick Ball for £375.  Ernest was a coal merchant and had been living at 5 Eastland Avenue.

Ernest was born on 8th December 1912 in the Gloucester area.  His father was Frederick Thomas Ball who was in the Gloucester Constabulary and his mother was Alice Eliza (nee Boughton).  The Balls moved to Thornbury when Frederick retired from the Police Force.  Frederick bought the Royal George which he ran himself for 15 years and the Thornbury Coal Company which was run by Ernest. 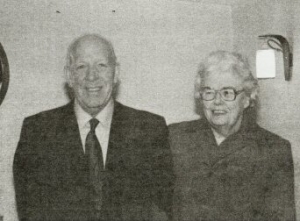 On 16th October 1933 Ernest married Rhoda Lois Symes.  Rhoda had been born in Thornbury on 15th April 1910.  She was the daughter of William George Symes, a highway surveyor and his wife, Lois Hedgland.  In the earlier years of the marriage they lived at Eastland Avenue until 1938 when they acquired 73 High Street.

Ernest was the owner of the Thornbury Coal Company.  We have a copy of a newspaper article which shows that in 1946 he was charged with selling coal at a price in excess of the prices set by the Government.  This is an interesting example of the control that the government had at that time over the price of coal and the problems that this gave small employers.  The price of coal depended on the amount to be delivered.  If a customer ordered more than five cwt at a time, a lower unit price was charged.  In fifteen cases, the customer had been overcharged by eight and a half pence, in one case the overcharge was eleven pence.  Ernest explained that his driver had made a simple mistake and the company had rectified the complaint.  Ernest pleaded guilty and was fined five shillings for each case which with the advocate’s fee of £3 3s made a total of £11 8s.

The article mentions that the Thornbury Coal Company had 800 customers and employed two lorries and four men.  We understand that Ernest became involved in the transport business when he joined with Ray Tills co-director of Thornbury Transport and he later spent his time with his pig farm in the fields behind the Castle and keeping chickens at Poultrybrook.

Ernest and Rhoda carried on living at 73 High Street all their lives.  Ernest died in 2000 and Rhoda in 2002.  We have been lucky enough to acquire a collection of photographs of the Ball family which we have put in the family album section of the website.  Click here to see the Ball family photographs