Before 1920, Thornburians had to travel to Bristol or Gloucester to enjoy a night at the cinema.  According to his grand-daughter, Sally Gordon, “Edmund Cullimore decided it would be nice to do something special for Thornbury after the First World War and he asked her mother what she would like to see in Thornbury.  She said “Oh, I’d like to see a picture house”.  So he built a picture house in Thornbury and that went on for quite a while and my father used to manage it and we were all quite involved in it”.

The cinema was built on the site of the Castle Temperance Hotel in the High Street.  Edmund bought these premises for £800 from Ernest Percy Weatherhead on 29th January 1919.  Rear access was provided from St Mary Street and Edmund acquired the land here from R. H. Smith who ran the Exchange pub.  The main access was through the foyer on the High Street.  This part of the building housed the ticket office, tea rooms and other rooms used for storage and social functions.  The auditorium was a large building on the rear of the site.  Click on the thumbnail nail on the left to see a plan of the buildings drawn up in 1919.

When plans were announced in February 1919 it was said there would be a restaurant and a clubroom, complete with billiards, bagatelle, reading room etc.  Approval was granted by the Thornbury Rural District Council in May 1919.  At the same time the District Council gave their approval to Francis Henry Grace to allow him to dig up the road in St Mary Street to lay a cable, presumably to provide electricity to power the cinema.

It is unfortunate that we don’t have any good photos of the cinema.  The ‘out of focus’ photo on the top of the page shows it position next door to the Exchange pub (now called the Knot of Rope).  The the tall building in the photo on the right below shows the rear of the main auditorium above the stage area backing on to St Mary Street.

Francis Grace was also credited with the idea of building a cinema in Thornbury.  He had apparently been organising a travelling cinema which toured the district in an old Ford car driven by Albert Pridham and Ron Dent.  The cinema opened in 1920 under the name ‘The Picture House’.  Edmund appears to have given the cinema to Helen who was married to Francis Henry Grace and Francis was appointed as the Manager. 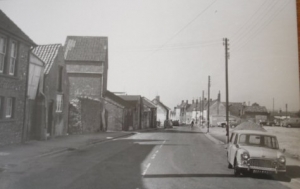 The Gazette dated 22nd May 1920 includes the following report on the Opening of The Picture House:

The long-looked forward to Picture House for Thornbury has now become an accomplished fact due to the entries of Mr Edmund Cullimore and has at once become a popular place of amusement.

At the opening ceremony this gentleman said the Picture House was his third enterprise in Thornbury.  He built the saw mills in 1888 and the brickworks in 1901, and now the Picture House in 1920.  The first two were to provide work and employment, and the third was to give enjoyment, amusement and instruction.  He had offered the premises to the Thornbury club, but they had secured other and better accommodation, and he had now turned part of the premises into first class tea rooms, and built this Picture House.  He had spared no expense and trusted the venture would be useful to the town and a success.  It was not intended to, and would not interfere with any existing social or religious movement but to supplement it.  The idea originated with Mr F. H. Grace, who was manager, and he had given the Picture House to his daughter, Mr Grace’s wife.  He was indebted to Mr Woolridge of Dursley or plans of the building, to Mr R. H. Smith who sold him a piece of ground for back entrance, and to Mr A. H. Wilkins who had helped them all through.  It was a great honour and pleasure to him that Canon Cornwall had come to open the House and he hoped it would be useful. The Rev. Canon Cornwall said he was glad to see the House completed, and hoped it would be a great success.  A great factor in their life was how they spent their leisure, and he welcomed this picture house as a help in that direction.  Picture houses could be a very great help to the uplifting of the people, or might have exactly the opposite effect.  He thought, under the existing management, this one would have the former effect and be for the uplifting and educating of the people.  It was he thought a place where they could bring their wives, sweethearts and children and be none the worse.  It would not upset their ideals or sully their purity, and he had great pleasure in declaring the picture house open and wished it success in the future‘.

It opened in 1920 with a special showing of ‘The Nature of the Beast’.  Initially the silent films were accompanied by someone playing the piano.  We understand that Helen sometimes played the piano, occasionally joined by her daughter, Sally, playing as a duet.  The piano was eventually replaced by a gramophone, and then talkies came along.  In Joe Pavey’s memoirs of his time in Thornbury he said that Thornbury had talking pictures before they were shown in Bristol and that a lot of people travelled out to Thornbury to see the new form of entertainment.  However we understand from the BBC Online website that talkies came to some Bristol cinemas in 1929 and the Wotton Under Edge cinema website says that talkies were introduced in Thormbury in 1930, after Wotton.

In May 1928 a special programme in celebration of its eighth anniversary was presented at the Thornbury Picture House.  The Gazette said that “In addition to high quality pictures, a musical programme was given. Mrs Grace and the Misses Sally and Elizabeth Grace opened with a trio, violin, cello and piano.”

For more than 30 years The Picture House continued operating as a cinema and acted a hall for pantomimes and other special shows, and provided accommodation for other social events.  During the War years it was used as offices for the troops based in Thornbury.  Francis Grace was appointed as manager when it opened, and then his wife, Helen, took over from him, and she was followed by her daughter, Ruth Rowe.  It finally closed in 1959 unable to compete with the alternative attractions such as television.

We are very much indebted to our good friend Jack Pridham for giving us a lot of information about the Picture House. Jack’s mother and father were both involved in the running of the cinema and Jack spent much of his youth there.  Click here to read Jack’s memories of the cinema

In addition to the various people mentioned in Jack’s memories, there were several other people associated with the running of the place in the forty years it was open. We know of:

Jacob Finch – it seems that at least one person lived in premises over the Picture House.  The Electoral Register for 1927 shows that Jacob Finch’s address was C/O F R Moody, Picture House.  The Gazette of 22nd November 1915 says that Jacob Finch became Second Lieutenant on 4th November.  He served in France with the Labour Corps attached to the Essex Rifles and became a Captain.  He seems to lived in Thornbury for about four years as the Western Daily Press of August 11th 1928 reported that Captain J Finch was leaving town.  He was given a send off party and concert by the Thornbury Branch of the British Legion and it was said that for over three years he had been an active worker in the cause of the Legion and he appears to have made great contributions to the sporting and social life of the Branch.  We have a Trade Directory that shows that “John Finch” of the High St was secretary of the Thornbury District Men’s Club and both Thornbury’s Cricket and Football Clubs in 1927.