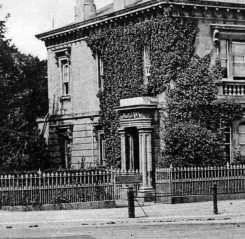 This house was long demolished before the introduction of cameras so we don’t know what the building looked like.  It was never given a name or a house number, but we have called it ‘The Philpot House‘ after the family who lived there in the first half of the nineteenth century.

The building stood between the property now known as 2 High Street and the NatWest Bank.  It was demolished in 1858, together with the White Hart to make way for the building of the bank.  The photo on the left shows that the space where the building stood became a garden adjoining the Bank and provided a side entrance to the building.  The demolition was referred to in part of a poem of that time in the local dialect. 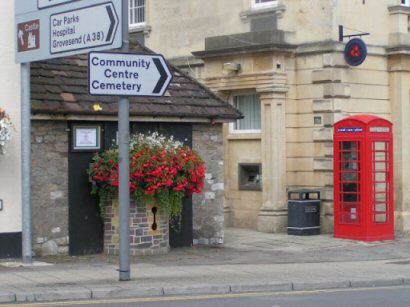 In 1956 the piece of land was leased by the Parish Council and they erected a bus shelter for passengers waiting there to travel northwards in the direction of Gloucester.  The lease was for 21 years, the Council paying the Bank £1 per year.  The lease was renewed for another 21 years in 1979. In the 1980’s the bus shelter became redundant when buses from Bristol were re-directed around Rock Street and its only function now seems to be as a location for a floral display as part of the Town’s entry of the Britain in Bloom competition.

We haven’t seen the deeds of the property, but we know from the 1840 Tithe Survey that it was then Plot 46, a house and garden owned by James Watts and occupied by William Philpot.

Also an abstract of title written in 1866 for 2 High Street shows that Obed Pitcher had lived here.  It says “All that messuage with stable and other outbuildings formerly in the tenure or occupation of James Prewett then since of …….(.blank) Rogers linen draper and afterwards of Edward Williams pig butcher then late of Daniel Pitcher Knapp and then Charles Putley adjoining to a messuage or tenement formerly in the occupation of Samuel Penduck then since of John Lane plumber and then of …. (blank) Lane his widow on the southward part to another messuage or tenement formerly in the occupation of Obed Pitcher saddler then since of William Philpotts basket maker and then of Messrs Harwood Hatcher and Company on the northward part and to a street called the High Street on eastward part thereof“.

When William Osborne died in 1807 he left James some property which we’ve not been able to identify.  It may have included the ‘Philpots House’.

We have got no records of James living in the property.  When he died in 1846 he was described as being ‘of Buckover’ in his will.  James left ‘all that my copyhold or customary messuage or dwelling house with the garden and premises thereto adjoining and belonging situate within the Tithing of Kington within the Manor of Thornbury and adjoining to the High Street of the Town of Thornbury and now in the occupation of William Philpot as my tenant’ to Louisa Underhill, the wife of John Underhill, labourer of Kington.  James left James Underhill the son of John and Louisa £19 19s when he reached the age of 21.

Louisa Hopkins was baptised in Kington on 12th July 1818.  The baptism record shown on the Scribes Alcove website implies that she was the illegitimate daughter of Elizabeth Hopkins.  On 24th June 1838 Louisa married John Underhill in Bristol.  We note that the marriage record shown on the IGI and on the Ancestry website indicates that Louisa’s father was William Hopkins.  The 1841 census shows John and Louisa living in Kington.  John was an agricultural labourer aged 28 and Louisa was aged 23.  They had a son called James aged 11 months.  John’s father, Daniel Underhill was living next door aged 66. Louisa’s mother, Elizabeth Hopkins, was also a few doors away.  It is interesting to note that although she was listed first in the census listing she was sharing the house with William Hopkins aged 66.  We suspect that Elizabeth and William were brother and sister.  The baptism records show that Elizabeth was born on 14th February 1781 and William born on 10th October 1775, both children of Joseph and Elizabeth Hopkins of Kington.

The 1851 census shows John and Louisa still living in Kington with three sons, James aged 11, Thomas aged 6 and Joseph aged 2. Louisa’s mother, Elizabeth Hopkins is living next door.  She is described as being unmarried (thus confirming the Scribes Alcove entry referred to above) aged 69 and working as a gardener’s assistant.

The 1861 census show them all living in Kington Village.  John and Louisa had an extra son, Robert aged 1.  Thomas had left home, and James had become a carpenter.  Elizabeth Hopkins was still living next door, but we note that this census record shows her as a widow aged 71.

William Philpot – the 1840 Tithe Survey shows William as the occupant of Plot 46, a house and garden next door to the White Hart on The Plain.  The house was pulled down at the same time as the White Hart to make way for the new bank.  The 1841 Census shows that William and his family lived there.  He was aged 42 and his wife Elizabeth was 47.  Their son John was a basket maker like his father.  William aged 16 had become a carpenter.  Isaac was 14 years old and no occupation was shown.  Alfred was aged 12, Martha seven and Henry five.

William Philpot was a basket maker.  He married Elizabeth Park at the Church of St Augustines the Less in Bristol on 4th April 1818.  They appeared to settle to live in Thornbury straight away.  William and Elizabeth had a son baptised there on 11th October 1818 called John Park Philpot (the spelling is very variable but we have decided on this version for consistency).  Their daughter Mary Ann Philpot was baptised 18th June 1820.  A second daughter Eliza was baptised 9th June 1822.  A second son William was baptised 22nd August 1824.  Their son Isaac was baptised on 10th May 1826.

The 1822 Thornbury Land Tax records show William was living at the house we have called 28A Castle Street.  By 1826 William Philpot no longer appeared in the Land Tax Records.  It’s possible that they moved to their house on The Plain at this time as the house would have been located in the Tything of Kington and therefore not in the Thornbury Land Tax area.

More children followed and the baptism record for each one shows that although the family seem to have moved they still lived in the Borough of Thornbury.  Alfred was baptised 4th November 1827.  Daniel Park Philpot was baptised 28th March 1830.  Henry was baptised 29th July 1832.  Martha was baptised 4th May 1834.  Henry Daniel Philpot was baptised 18th December 1836, the same year that six year old Daniel and five year old Henry died.  Elizabeth and William lost other children; Eliza died June 2nd 1844 aged 22 years whilst living in Wickwar and Mary Ann died November 6th 1845 aged 25 years whilst living in Bristol.  All these children were buried in Thornbury.

We are delighted to find a reference to Philpot the Thornbury basket maker in an article written in 1898 by Joseph Bennet for the Musical Times and Singing Class Circular.  He remembered Philpot as:

‘he was a musical maniac on lines of his own and possessed the largest collection of anthems in manuscript that ever came under my notice.  Examples old and new, some, by local composers, of the strangest description, were procured from far and near for the purpose of being copied into his big books.  At this task most evenings were spent, and nothing delighted him more than to place before sympathetic eyes the voluminous collection of which he was so proud.

Philpot, however, was not a collector merely.  He delighted to take part in expounding the works he had brought together, doing so with a preference for the tenor solos; which, as owner of the books, he insisted upon singing.  The basket-maker was, in point of fact, a genuine follower of a certain Athenian weaver.  Even as Bottom desired to play all the parts in ‘Pyramus and Thisbe’, so did Philpot wish to sing all the solos in his anthems.  Against this attempted monopoly there were frequent protests, followed by ‘scenes’ but the worthy man held his ground.  He deserved indulgence, since he it was who organised the system of musical supply which occasionally bestowed the grace of religious song upon churches like that of Oldbury on Severn.

Whenever Philpot was seen making calls at musical houses in Thornbury, it was at once understood that arrangements were in progress for an excursion to some outlying and destitute parish.  Let me suppose a visit to the church just named which is within an easy walk and, in summer time, a pleasant walk to boot.  Let me further imagine that Philpot, having obtained a sufficient number of acceptances, musters his forces at the time and place fixed upon.  Then the little company sets out through the fields in the direction of the white-washed church, which can be seen glinting through the trees on the top of its hill.  Each man who is not a singer carries an instrument, and Philpot, bearing his precious manuscript books, stalks on ahead with a swagger that might have made his prototype envious.

Do you ask if the clergyman, or churchwardens, or clerk had been informed that such visitors were to be expected?  I reply that nobody dreamed of giving them notice, much less of asking permission.  Those officials, in point of fact, were coolly ignored, the assumption being that ‘supply’ could do as it liked, which indeed, was always the case.  The church now comes into full view, and excitement is noticeable among the groups of loungers about the gate.  They, probably, caught sight of the ‘musickers’ some time ago, and gave a cue to the village, which is sending up more than its usual contingent of worshippers.  It is a treat to watch Philpot pass the idlers at the gate and move on and into the church.  The swagger has become positively imposing.  No word speaks he, nor does he turn head or eyes to right or left.  He is all dignity and consequence, strengthened by a very comfortable assurance that events will justify the majesty of his bearing when he begins to sing.

The clergyman is, perhaps, already in his reading desk; but he obligingly waits till the visitors have occupied the singing pew, and tuned their instruments under the round-eyed gaze of as many yokels as can command a view.  In a few minutes a piece of paper is handed to the clerk, from which that functionary learns the names of the hymns and anthem which Philpot – who but he? – has selected.  Thereupon the services proceeds.’

William Philpot died on April 20th 1849 aged 51 years.  The 1851 census shows Elizabeth was carrying on as a basket maker in their house on The Plain.  She was aged 57 and born in Kingswood in Wiltshire.  Two of her children were living her Henry was a basket maker aged 15 and Martha was a dressmaker aged 17.  Elizabeth died on July 22nd 1852 aged 57 years.  Isaac took over the business of basket and sieve making.  On 2nd September 1854 Isaac Philpot attempted to sell his business described as ‘a very old established basket and sieve business’.  Click here to read about Isaac.

Nearly all the remaining children also died young.  John Park Philpot died aged 36 on January 9th 1854.  Interestingly John’s memorial says that he died on a voyage to New Zealand.  Martha died January 6th 1857 aged 22 years.  We have also leaned that William Philpott junior arrived in Melbourne Australia on 22nd December 1852 and died there on 12th May 1893.