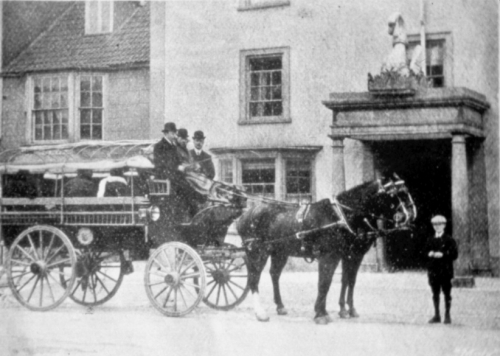 This page concentrates on the history of The Swan as a coaching house and posting inn.  Click here to read about other aspects of its history.

The Swan is often described as a coaching inn and it certainly has the classic layout of an inn into which a coach could drive for the convenience of passengers.  It also has generous facilities for stabling etc.  Although it may have been used by ‘local’ coaches at earlier times, we don’t think it was used by the long distance mail coaches until around 1800.

The Post Office Museum has a record of a letter dated 1793 from Thornbury “praying that the Birmingham – Bristol mail coach may pass through”.  We are grateful to have had the opportunity to look through the research into the history of the Post Office undertaken by David Watkins of Littleton.  There is an interesting reference in ‘The Mail-Coach Men of the Eighteenth Century’ by Edmund Vale.  In 1796 the Superintendent, Thomas Hasker, wrote to the Hon. Charles Francis Greville who had proposed to take the Bristol – Birmingham mailcoach through Thornbury.  Hasker said that ‘years ago the road was reported as incomplete, but Wilkins will go and report on it.  At present the mail is taken there by a runner at £10 per annum.  The decision must be left to the contractors for all the Innkeepers and Coachmasters from Bristol to Birmingham are in a Company, thirty four in number, and if they should say they will not, a new Connection cannot be formed.  For this slight diversion from the present route, to pass through Thornbury, Mr Weeks may be allowed an additional five minutes’.  It seems that this proposal was not granted at that time and thus mail to and from Thornbury had to link up with the mail coach between Bristol and Birmingham en route.

However the mail coach was passing through Thornbury by December 1806.  It was reported in the Gloucester Journal on 22nd December 1806 that there had been a serious accident when the Bristol to Birmingham mail coach was travelling down the hill between Alveston and Thornbury.  Apparently the coachman was ‘much intoxicated and the night very dark’ when he fell from his box and one of the wheels passed over his neck killing him.  The coach guard was able to control the bolting horses and take the coach and its passenger to Thornbury.  He returned to look for the coachman who he found dead.

The 1830 Pigots Directory shows that the coach stopped in Thornbury at 8.30 pm en route for Birmingham and 5.30 am en route to Bristol.

The 1839 Robsons Directory lists The Swan under the heading of ‘Posting Office’ and suggests therefore that the mail coach stopped at The Swan at 4.20 pm on the way to Birmingham and at 8 am on the way to Bristol.  Mail for the Thornbury area was presumably dropped off at the inn and taken to the Post Office for local distribution.  Mail intended for other parts of the country was loaded onto the mail coach for onward transfer.

We know from the 1840 Tithe Survey that The Swan had taken over the rear of the adjoining property (15 High Street) fronting St Mary Street.  The extra space has been used to enlarge the yard and to erect outbuildings which were presumably a coach house and stables.  By the time of the next map which we have (about 1880) a very long outbuilding had been built on this adjoining land.  This building was used for stables, although when there wasn’t the same demand for stables, it was converted to a skittle alley in the 1900s.  It is still visible from St Mary Street.

They also expanded by taking over a small plot of land at the rear of the Staffords Almshouses on St Mary Street.  They used this space to erect a large coach-house.

The 1842 Pigots Directory says that the Royal Mail coach from Bristol to Birmingham called at The Swan in the afternoon at 4.30 calling at Gloucester, Tewksbury, Worcester, Bromsgrove and Droitwich.  On the return journey the coach stopped at the Swan at 6 in the morning.

The Swan became a central transport hub for the Town.  It had the advantage over other places in Thornbury of having good access to the yard at the rear of the property and very spacious outbuildings providing coach houses, stabling for 40 horses and a large saddle room.  It could provide guests with over night accommodation and food and drink and with links to other forms of transport to allow travellers to get to their destinations.  The 1839 Pigots directory shows a coach service from The Swan running to Bristol in the morning on four days each week with a coach returning to Thornbury on those days in the evening.  Adverts show they offered open carriages and flys for rent and lose hunting boxes.  We find it interesting to see that despite having a wide range of facilities for coaches and horses, The Swan wasn’t used by the Town’s carriers and its early omnibus service.

We assume that the mail coach from Bristol to Birmingham ceased operating when the railway line opened, thus providing a faster connection between the two cities in 1844.  It would have been easier then for the mail to be transferred between The Swan and Charfield which had the nearest station on that line.  Presumably the coaching service was much reduced because Thornbury was being bypassed by that railway.

Although it was not needed as a stopping place for the Royal Mail coaches, The Swan continued as a posting inn.  The 1849 Hunts Directory shows that there was a mail coach running from The Swan, but only to Bristol.  An advert printed in 1872 refers to the Swan as a Posting House, although this service was presumably soon to change when Thornbury had its own railway service in 1872. Motor Bus outside Swan about 1906

The Swan continued operating as a transport ‘hub’ for Thornbury.  When the landlord William Sylvester Pegg moved away from Thornbury in 1918 he advertised a vast collection of vehicles for sale.  These included two motor cars, four in hand brake (for 32 passengers), open brake (for 21 passengers), pair horse bus (for 15 passengers), a char-a-banc, a van suitable for laundry, a Victoria, a brougham wagonette and a hansom cab.  The thumbnail image on the right is a billhead dated 1918 showing these vehicles were offered as services available for rent.  Click on the thumbnail on the left to see a larger image.  The photograph above shows that when the motorised buses to Bristol were introduced in 1906 the Swan became the Town’s main bus stop.  Please click on the image for a larger photograph.

Finally there is a sign fixed to the front of The Swan in the early 1920’s advertising that it provided a ‘Garage’ and that ‘Taxis’ and ‘Petrol’ were available.