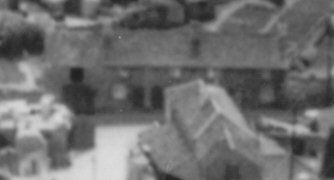 The houses which became known as number 13, 15, 17 and 19 were a block of four terraced cottages.  We have been frustrated by the difficulty in obtaining any photographs of these properties.  Although it is not very clear we were thrilled to see the image on the right which gives us some idea what they looked like.  We would love to hear from anyone who has anything better.

We have been given a good description of the houses by Win Jenkins (nee Webb) who was brought up in one of them as a child.  Click here to read Win’s description

We don’t know when the houses were built.  We suspect that the orchard and garden land on which they were built was owned by Richard Williams, a pargeter or plasterer and tiler.   On Richard’s death the property was given in trust to his wife, Mary Williams.  On Mary’s death they eventually ended up being owned by Mary Wilkes – click here to read the full story

In the 1840 Tithe Survey, the houses were part of Plot 133 which also included the four similar houses in Rock Street referred to above.  All these houses were owned by Mary Wilkes.  The eight houses were occupied by Thomas Grigg, John Thomas, William Clutterbuck, Thomas Smith, Thomas Elton, Joseph Pym and William Matthews.  We know from the 1841 Census that Thomas Smith, Joseph Pym and William Matthews were living in Horseshoe Lane at that time, and we assume that Thomas Elton was also there.  However, in the absence of any deeds for these houses, it is extremely difficult to identify which family occupied each house until the period in the 1900’s which Win was able to tell us about.  Until that time, we have based our findings on the tithe records, census records and other sources, but please remember it is still just ‘informed guesswork’.

On Mary’s death in 1849, she left the four houses to her daughter, Emma Knapp, the wife of Henry Knapp, the blacksmith and ironmonger.  When they both died in 1882, the houses were left to their niece, Mary Ann, the daughter of Emma’s sister, Ann Ann and her husband Thomas.  Click here to read about the Wilkes and Ann families

Mary Ann attempted to sell several of her properties in 1890.  We don’t know if these four houses were amongst the lots put up for sale, but they remained in her ownership.  Mary Ann died on 23rd February 1917 aged 65 and Samuel died on 5th October 1923 aged 78.  Following Samuel’s death, the four cottages were put up for the sale at auction in 1924 but they failed to find a buyer and the owner was still shown as ‘The Representatives of S. M. Wilmot in the 1926 rate book.  They continued to be owned by Trustees until the time they were demolished in the 1960’s.  None of the houses were occupied in the 1961 electoral register.  The land on which the houses stood was eventually sold to Thornbury Rural District Council on 27th June 1968.