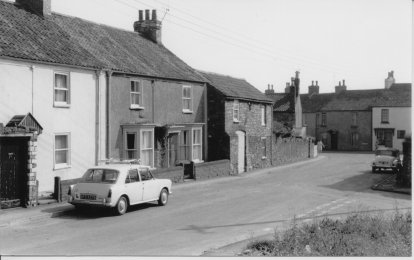 The above photo was taken in 1969 showing the two cottages on the left-hand side of the road at the bottom end of Horseshoe Lane.  The white cottage on the left became number 4 when numbering was introduced about 1953; the one in the middle became number 2.  This house was better known as Myrtle Cottage.  The building on the right of Myrtle Cottage was a workshop.

We are grateful to South Gloucestershire Council who allowed us to copy the deeds of these properties in Horseshoe Lane.  The records show that 2 and 4 Horseshoe Lane were built by Daniel Burchell on a garden or orchard he had purchased from Ann Caddy.  The deeds don’t show a date but we know that Daniel didn’t move to Thornbury until about 1815 and that he built other properties in the area in the early 1820’s.

There is a memorandum in an abstract relating to the adjoining six cottages in Pullins Green which shows that on the 28th December 1830 Daniel sold the two houses he had lately built in Horseshoe Lane to Sarah Trayhurn.  The 1840 Tithe Survey shows that the two houses were both owned by Sarah Trayherne.  She lived in number 2 (plot 225) and number 4 (plot 224) was occupied by George Hoare.  The workshop adjoining number 2 is not shown on either the 1840 or 1881 plan.  It does appear on a 1903 map.

The 1859 rate book shows that Sarah was still owning both properties.  Sarah Trayherne (Trayhurn) died on 19th October 1866 and her estate was left to Laura Collins, her niece, wife of William Collins of Morton.  From the will we know that Laura Collins owned the two house, numbers 2 and 4 Horseshoe Lane, but there is no record that she lived in either of them. 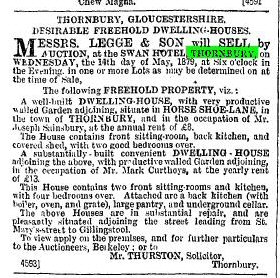 The 1876 rate book shows that the two houses were owned by William Collings Junior.  The image of the right shows a notice of sale of both houses was published in the Bristol Mercury dated 3rd May 1879.  On 24th June 1879 4 Horseshoe Lane was conveyed to Sarah Winstone.

The 1910 rate book confirms that Thomas owned both houses and he was still listed as the owner of the two properties in the 1926 rate book.  Thomas Exell died on 14th January 1930.  On 24th June 1930 Thomas’s executors sold the two houses to Alfred Riddiford and his wife,Emily Minnie for £625.

In June 1949 number 4 was put up for sale at auction.  It was described as ‘a semi-detached stone-built and tiled cottage and garden situate in Horseshoe Lane until recently in the occupation of the late H. Hook.  The accommodation comprises; Front Sitting Room with good cupboards, Back Living Room, Lean-to Back Kitchen with sink, Front Bedroom with fireplace and cupboard, Back Bedroom, Coal-house and W.C. All Main Services.  There is a capital walled-in garden with side entrance and ample room for a garage’.

Following the deaths of Alfred and Emily Riddiford, their son, Charles and his wife, Peggy, continued living in Myrtle Cottage until it too was acquired by the Council.  Both houses were demolished in the early 1970’s as part of the town’s re-development.

Click here to read more about the Riddiford family