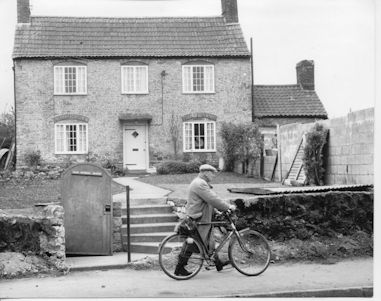 The photograph of ‘The Old School House’ taken in 1971 shows it fronting Gillingstool Hill.  We were puzzled for a long time because locals told us it was accessed from Horseshoe Lane by a little alleyway.  We discovered that older maps of the area such as the 1840 Tithe map and 1881 O.S. map do indeed show that the house had no access to Gillingstool and that the front path seen above was a ‘modern’ arrangement’.

We know that the house was built on land owned during the mid 1700’s by Thomas Smith, the younger, a carrier who lived in the house later known as 5 Horseshoe Lane.  An indenture dated 6th June 1757 shows that Thomas had built a new house in the garden of his main property and we assume that this was the one which became 3 Horseshoe Lane.  A will dated 1794 of Thomas Smith’s daughter, Ann (who had married Timothy Child) refers to a ‘small tenement or dwelling house wherein Joseph Gough the elder deceased for many years inhabited and James Wetmore doth now dwell’.  This property was left to Ann’s daughter, Hester.  This supports our contention that this reference applies to the ‘school house’ because as referred to below we have copies of a document which shows that Hester Mountford had owned the property conveyed to the British Schools in 1866.  Hester Child married John Mountford on 12th October 1794, and following his death she married Joseph Stephens.  Click here to read about the early history

It continued to be owned by the local education authority, at least up to the 1910 rate book.  As far we know it was never used to house any of the schoolmasters.  It was occupied by a series of families.

Philip George Hawkins – on 21st August 1921 Gloucestershire County Council sold the property to Philip Hawkins for £100.  Philip was a local builder and he never lived here. His home was at Warwick House in St Mary Street.  On 3rd June 1938 the property was sold to Alfred and Emily Minnie Riddiford for £165.  Click here to read more

On 26th October 1960 Maud sold 3 Horseshoe Lane, after hiving off the piece of land which connected the house with Horseshoe Lane.  This piece of land was added to the garden of 1 Horseshoe Lane.  It is interesting to see that Maud made a sizeable profit on the dealings as the property as well as expanding the garden of her property.  The house she bought for £875 in 1959 was sold a year later for £3400 despite it being a smaller property.  Click here to read about Maud

Roger William Postlethwaite – on 26th October 1960 Roger bought the property from Maud Evelyn Eyre.  He paid her £3400.  At the time Roger was living at Ealing in London.  There is no indication in the electoral registers that Roger ever lived in Thornbury.  On 22nd November 1965 Roger sold the property to Thornbury Rural District Council for £4000.  At the time of the sale he was living in Dulwich in London.

Click on the thumbnails below to see photos of the house’s demolition. The photo on the left was taken 7 days after the photo at the top of this page was taken, and one on the right was taken 2 weeks later.  The site was later incorporated into Rock St car park.