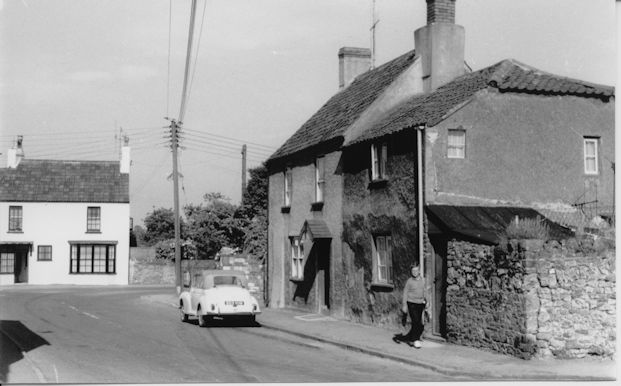 The two cottages on the right of the above photograph are numbers 5 and 7 Horseshoe Lane as they appeared in 1969.  Number 5 is the one on the left.

Both cottages were very old.  The earliest owner of the property clearly identified is Edward Tayer.  There is an entry in the manorial records of a session of the Manor Court of Thornbury held on 11th July 1616 at which Arthur Harvest and his wife Alice, Henry Peirce and his wife Ann and a lady called Cecilia Tayer came to “seek licence to alienate one burgage and a quarter of a burgage to Edward Tayer and give a fine for alienation 2s 6d.”

The property was described as being ‘located ‘at or near unto a place there called Burgage Hill having the highway there leading from the said Town of Thornbury unto a place called Gillingstool on the or nigh the northern side thereof’.  We think that this is the house which became number 5 Horseshoe Lane.  Number 7 had been built as a brewhouse at some time before 1708 when it was described as ‘newly built’, and was later converted to a stable and then by 1794 had become a house.  Click here to read about the early history

The property descended through three generations of the Tayer family and was sold to Thomas Smith in 1700.  It remained in the ownership of Thomas Smith and his descendants for over 230 years.  When Ann Child, the grand-daughter of Thomas Smith died in 1794 she divided the properties between three of her children.  She left her son, Thomas Smith Child, ‘all that messuage or tenement wherein I now dwell’.  We believe this house was 5 Horseshoe Lane.  Ann left her daughter, Ann Child, (the wife of Jesse Cossham) the ‘small tenement or dwelling house (formerly a stable) where Betty Bedggood doth now inhabit’ for her natural life, but after her death the property was to given to Ann’s daughter, Ann Child Cossham and her heirs.  We believe this to be the house which later became number 7 Horseshoe Lane.

By 1824 both properties were owned by Thomas and Ann Wise.  We are speculating but it is possible that Ann used the money obtained from selling another house in the High Street in 1819, to buy from her cousin, Thomas Smith Child, the property adjoining the one she was expecting to inherit on the death of her mother.  Her mother died in 1824 at which time Thomas and Ann Wise owned both 5 and 7 Horseshoe Lane.

Following Thomas Wise’s death on 8th May 1871, we know that his properties in Horseshoe Lane appear to have been left by his wife, Ann, to her children in four undivided parts.  We have copies of Inland Revenue documents which show that their daughter Ann had one part and that their son, Jesse, had another part which he sold to his brother, Edward.  We assume that Edward was also left a part of his own, but we don’t know who had the fourth part!

The rate book of 1885 shows the two properties, 5 and 7, were taken over by Thomas’s son, Edward Wise and son-in-law, Lewis Wallington.  After Lewis died in 1885, the 1890 rate book shows that Edward became the sole owner of both properties.  However the 1894 rate book shows that Lewis’s widow, Ann Wallington, was the owner occupier of number 7.  When Ann died in 1896, Edward became owner of both properties again, although he continued to live in Blackburn where he moved to about 1850.  In 1910 rate book ‘Mrs Wisse’ is shown as being the owner – this would have been Charlotte and Ann Wise, the two unmarried daughters of Edward Wise who became his heirs after Edward died on 16th January 1905.  They continued to own the properties until their deaths, Charlotte on 6th June 1916 and Ann on 15th December 1937.

Frederick George Bond – on 9th May 1950 Frederick bought the two properties from Emily Riddiford for £600.  At the time of the purchase he was living at 34 Branksome Drive, Filton and his parents moved into number 5 Horseshoe Lane.  By 1954 Frederick and his wife had moved into 5 Horseshoe Lane and they remained there until 5th April 1967 when Frederick sold the two properties to Thornbury Rural District Council for £5250.  Click here to read about the Bonds