The photograph on the left shows the two houses which were located in what became the building yard of P. G. Hawkins.  The photo on the right below shows their location on the right hand side of the road looking towards St Mary Street.

We understand that they were called ‘Marylands’ although we have not yet seen that name written in any documents.  Locals recall that there was a large nameplate showing that name on the houses.  We have been told by Norman King who lived nearby that the house was given the name of Marylands by a family who were ‘strict Roman Catholics’, and he thought it may have been the Collett family who lived there after WWII, but he wasn’t sure.

We know very little about the history of these houses. 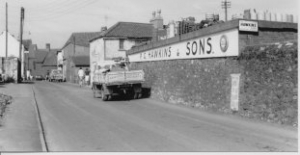 The two houses appear on the 1840 Tithe Survey map as Plot 222.  At that time they were owned by Daniel Burchell and occupied by William Goff and John Shield.

Daniel died in 1866 and after a period where it was administered by his Trustees.  On 2nd June 1883 Frederick Burchell chose to take up the option of purchasing some of the property left by his father Daniel Burchell.  He paid £380 for the two properties in St Mary Street (later known as 21 and 23 St Mary Street) and two properties in Horseshoe Lane later known as ‘Marylands’ and the coach house which lay between the four properties.  Click here to read about the Burchells

When Frederick Burchell died in 1905 the houses were put up for sale at auction in 1907.  The two houses were split into two lots – the one adjacent to Horseshoe Lane was described as ‘Lot 5 a cottage and garden occupied by Henry Harvey at two shillings and six pence per week.  The other house was part of Lot 2 described a cottage (now used as a store house).

An indenture dated 1st January 1908 shows that the two properties were bought by Thomas Anstey for £160.  Thomas was Frederick Burchell’s nephew, the son of Frederick’s sister, Ann.

On 13th December 1918 Thomas Anstey sold this property to William Eyles for £185.  The 1925 valuation list and 1926 rate book both show that William Eyles was the owner of the property.  On 26th June 1945 William Eyles sold the property (described as a cottage, formerly two cottages) to Leslie James and Lyndon Hawkins for £400.

The Hawkins brothers initially rented them out, including for a period of about 12 years to one of their employees, Ray Roberts.  When Ray and his wife, Dorothy moved out in the early 60’s, the building was used for storing building supplies.  Then in 1973, the property was sold to the District Council and the buildings were demolished as part of the town’s re-development.

We do not have a complete record of the occupants of the houses, but we do not about several of the families who lived here.