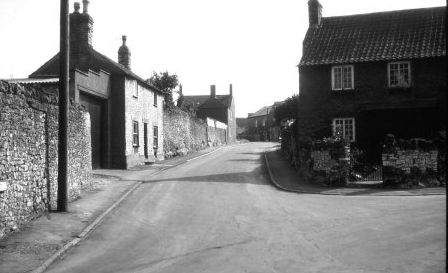 The above photo shows the junction of Horseshoe Lane and Rock Street. Numbers 9 and 11 are the pair of semi-detached houses on the right of the photo.

It’s possible that both cottages had names.  The one on the left, later known as number 9 Horseshoe Lane, was called Laburnum Cottage when occupied by widow Elizabeth Underhill in the 1911 census.  There is also a reference in the records of the National School to ‘Rock Cottage’, the home of William Cornock when his children started school there in 1899.  We know from the 1899 rate book that William was living at the house which later became known as 11 Horseshoe Lane. 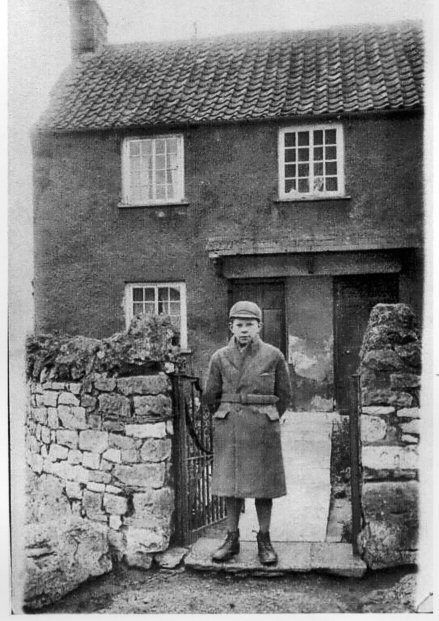 The photograph on the right shows that there was a large rock just outside of the front gate, so it is possible that this was the name of the cottage.  The young lad in the photo was George Frederick Harris, the son of Frederick and Lily Harris who lived in the house from about 1924 onwards.

The houses were built before 1840 and are shown on the Tithe Survey map as Plot 132.  At that time they were owned by Mary Wilkes and occupied by Sarah Hughes and Mary Lidiard.  We have assumed that the Hughes family lived in number 9 and Mary Lidiard in number 11.

On Mary Wilkes’s death in 1849, she left the two houses to her daughter, Emma Knapp, the wife of Henry Knapp, the blacksmith and ironmonger.  When they both died in 1882, the houses were left to their niece, Mary Ann, the daughter of Emma’s sister, Ann Ann and her husband Thomas.  Click here to read about the Wilkes and Ann families

Mary Ann attempted to sell several of her properties in 1890.  We don’t know if these two houses were amongst the lots put up for sale, but they remained in her ownership.  Mary Ann died on 23rd February 1917 aged 65 and Samuel died on 5th October 1923 aged 78.  Following Samuel’s death, the two houses were put up for the sale at auction in 1924 and they were sold to J. Tuck for £300.  Presumably this was Joseph Tuck who lived at 1 Rock Street.  Joseph was listed as the owner in the 1926 Rate Book.

Following Joseph’s death on 11th January 1937, his executors sold the properties to William Short for £375.  William was a retired railwayman.  We have been told by Win Jenkins that she used to help the Harris family who lived in number 9 by taking their rent money to their landlord, William Short in Siblands.