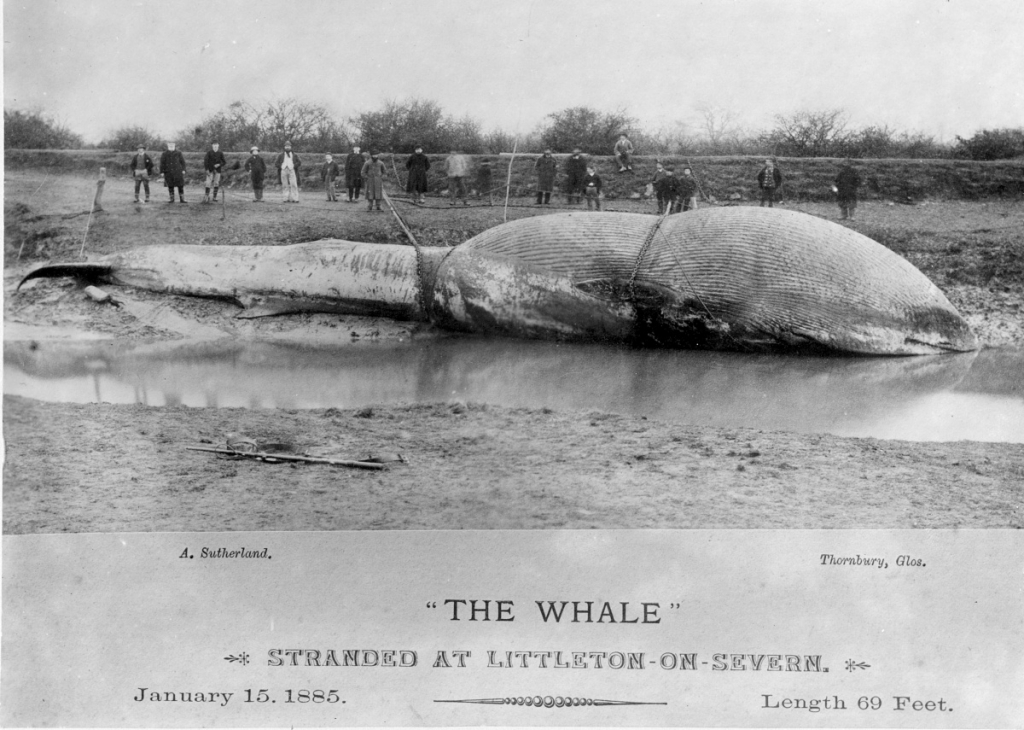 Littleton Whale by A Sutherland

In January 1885 a whale was stranded near the brick and tile works at Littleton.  This wharf is still known as Whale Wharf.  The excitement the Littleton Whale caused is quite astonishing.

The story began when the whale was sighted by Mrs Bella Durnell, wife of the foreman of the brick works.  The huge whale lay feebly moving on the shore with the tide receding from it.  After some hurried consultations with Jim and Moses White, both boatmen of Littleton, George Sindry and his two steam tractions engines were brought from Olveston and, with the help of huge chains, the whale was hauled ashore.  Local Methodist preacher Charlie Smart of Canada House, Littleton recalling George Sindry said that he was a very religious man.

“He told himself when that whale came in he’d heard so many arguments about the story of Jonah not being true that he went down to Littleton to satisfy people.  He was a tall man, six footer, but he told me he got in that whale’s mouth and he was able to stand upright.”

Not everyone saw the whale as one of God’s creatures.  The Lord of the Manor of Littleton upon Severn, Robert Cann Lippincott of Over Court believed it was his property because it had washed up on his manor.  The bailiff of Thornbury County Court George Exell was asked to place a notice to that effect on the whale.  George Exell attached the notice to the chains by which the whale was secured rather than to to the animal itself – perhaps by then the animal had begun to smell.  The owner of the brick and tile works George Wintle felt it might belong to The Crown and the matter was referred to the Board of Trade.

Whoever owned the whale it certainly was causing a stir by this time. How many people actually came is not known.  Certainly there were many thousands of them, one newspaper said over 20,000.  The Midland Railway put on special excursion trains.  We know that on 26th January 1885 an advertisement appeared for a cheap excursion train to Thornbury (the nearest station to Littleton) to visit the whale.  The train would leave Bristol at 1.30 pm and Fishponds at 1.35 pm returning at 6.20pm.  The fare there and back was 1s 3d third class.  The sheer number of visitors apparently also caused a great deal of damage to local roads.  Read about the railway line

“So large was the number of visitors to Littleton on Sunday that the vehicles in which they came were about three miles in length”.

“Those who stood to leeward, and into whose faces the spicy breeze from the monster blew, held their noses and manifested in a very demonstrative manner that their olfactory organs were in no way delightfully tickled”.

Alexander Sutherland‘s photograph shown here makes the whale seem very swollen but that is sadly due to its already decaying condition.  This photograph is the most well known of those taken to commemorate the event.  It is interesting because it shows a line of people on the river bank, which gives an idea of the immensity of the creature.  An article in the bulletin issued by “The Society of Thornbury Folk” (August 1963) explains that it was a female Rorqual or Smooth- backed whale which was 68 feet long.

The whale was eventually claimed by the Crown and customs officers arrived from Sharpness.  It was towed down the estuary and up the Avon by a tug called the “Frank Stanley.”  It ended up in St Phillip’s Marsh in Bristol where it was exhibited to thousands more people for a further fortnight before being made into fertiliser.  Presumably Bristolian olfactory organs must have been severely challenged by that time!  Some of its bones were said to have been deposited in the British Museum.