We are grateful to Jack Pridham who spent his childhood years in Thornbury and wrote a book of his memories of the town and his family.  In this extract he describes in much detail his Aunt Ellen and her husband George (shown in the photo on the right).  You can read other extracts of Jack’s memoirs by clicking on the links in the left hand column.  His aunt was Ellen Bartlett, the eldest daughter of Charles and Jane Symes

The eldest, Ellen, known to everyone as Nell, was my favourite aunt with whom I had an excellent relationship: in retrospect, she probably treated me as the son that she never had.  She was born in Thornbury in 1880 when her mother and father were 24 and 25 years-old, respectively, Gladstone had become Prime Minister for the third time, the Boers had revolted in the Transvaal and the first British telephone directory was issued.  Her mother went on producing children for another 23 years!

I do not have details, but Nell was probably married fairly late in life – late that is for the Victorian/Edwardian era.  I imagine that as a young woman, she had been a great help to her parents who were busy shopkeepers.  She was eventually married and whisked off to Cheltenham and then on to Gloucester by her new husband, Sergeant George Bartlett of the Gloucestershire Constabulary.  Uncle George, you will have guessed, had been stationed in Thornbury at the start of the 20th century: he was my favourite uncle!

I first became aware of Uncle George and Auntie Nell when I was about 3 years-old.  They came down to Thornbury two or three times a year, including the Christmas holidays, and I was always excited when I heard they were coming and very disappointed if for any reason their visit was called off.  George would talk to me more than anyone else in the extended family, at length and as an adult.  He knew about the Zulu and Boer Wars and about Gallipoli and the Turks who hid up in the trees with knives and dropped down on our troops!  He discussed the war that was coming and assured me that GB and the Empire would outnumber the enemy and win – he came near to being wrong in this case!  Nearer to home, it was exciting to hear of his police exploits – everything from plodding the beat from farm to farm on dark nights in the depths of winter to having to visit the Gloucester mental asylum where he assured me, there were people with two heads!  He had a truncheon, a pair of handcuffs, knuckle dusters, a German rifle and a set of tiny ivory dice hidden in a cork which he had confiscated from some gamblers.  We went for walks together, he taught me to play cards and when he was present the whole family would get together in a rare ensemble for a game of Black Maria (Hearts) and after, shared supper around the circular mahogany table in the front sitting room.

George’s popularity and his self assurance did not go down well in some quarters.  He may have originally been ostracised, as will be seen, for complicating grandfather’s demise. 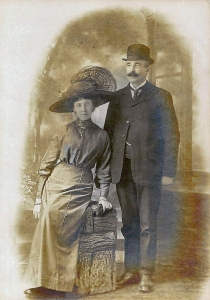 Furthermore, he had not gone into the army during the 1914-18 War because of his reserved occupation and, worse, he had retired early from the police force after which he and his wife lived comfortably without needing further employment.  There was a feeling that he ought to have been working – all other men toiled when they were 50 and up-wards!  All these things were stacked against him and similar, rather trivial things concerning other family members were permeating the tribe at the same time.

George and Nell’s house in Gloucester was somewhere I liked to go; it was the second longest journey after Weston-super-Mare that I ever took as a child and therefore marginally exciting although I knew every tree and every house en route.  The bus from The Plain was the normal mode of transport, 24 miles in one and a quarter hours, or if the war got in the way, by train – three times as long but with more excitement.  The bus had its drawbacks: taking us on a long and deemed to be unnecessary side trek to the rival town of Berkeley (pronounced as spelt by the locals and Americans and as “Barkeley” by those who thought they knew better!) and, sometimes, in the absence of barley sugar, making it necessary for me to change the contents of my stomach! (Travel sickness plagued me until I was about 14 and after short journeys to Bristol, and if there were no embarrassing ‘accidents’ on The Centre, I often ended up in Ferris the Chemists quaffing their home made potion to alleviate the nausea).

The bus stopped in Southgate Street, Gloucester and then it was only a short walk to 19, Wellington Street, a brick house in a long terrace with a red “Cardinal”-polished door step and an artificially grained, varnished door with brass fittings that were polished daily.  There was a mechanical door bell which needed to be wound up from time to time and on the other side of the door there was always a warm welcome.  Auntie Nell was a meticulous, or as some would say, “absurd”, housekeeper.  Everything was carefully arranged and protected so that it would last a lifetime.  When the sun shone a curtain was hung over the front door to stop it blistering and the stairway was always covered with a canvas sheet to protect the carpet from fading.  Carpets were unusual in working class homes and they needed care and attention; linoleum was cheaper and more common and Nell had this in her living room and kitchen at the back of the house – and this was the floor covering in most rooms on The Plain!  The front room at No.19 which looked out into Wellington Street, was an archetypal Victorian parlour with more carpet which was protected from the sun by a roller blind that was permanently down, flowered wallpaper and, of course, an aspidistra.  Gardening books tell you that this plant will tolerate neglect – which is what it got in a dark room that was never used!   The sitting room contained well preserved, hand-me-down furniture which was much too large for the space.   There was a huge, centrally placed mahogany table protected with a red velvet cloth which in turn was protected with an oilcloth!  Meals were served at the table, which required yet another cloth; nothing was ever taken on the lap.  Matching the table was a chunky mahogany sideboard with a wooden biscuit barrel on the top and placed dead centre.  This item always fascinated me and it was hard to leave it alone.  Perhaps it was the contents or more likely the round chromium top which could be rung like a bell.  In the sideboard cupboard was kept a tin of Robinson’s humbugs with a lid which could be prised open with a penny.  These were sampled every afternoon!

As if the table and sideboard were not enough, there was also a large, upright mahogany piano against the wall with brass candle sticks and a heavy music stool.  The piano like most other things, was rarely used.  Nell must have been one of the few or perhaps the only member of the Symes family that had learned the piano and on a few occasions she did open the lid and play hymns for us.  I had the instrument open on every possible occasion and once, in my many attempts to wake Johann Sebastian and Ludwig from the dead, I composed a piece of music which I called “The Storm”.  All of this was tolerated if not encouraged!  Four dining room chairs were around the table and two against the walls.  Two easy chairs were either side of the black fireplace where uncle demonstrated the preparation and use of his special Gloucester “Citizen” newspaper fire lighters which replaced the normal wood kindling.  A wireless with its aerial passing though the window frame to the external ether was on a small cane table in the window displaying its high tech glass accumulator and batteries on a shelf below.

The kitchen was one step down from the sitting room. Its facilities were a simple, grey and white enamel gas stove venting to the garden (which was of no help when Uncle was frying his shallots), a pale orange/brown stoneware sink with a brass cold water tap, an oilcloth-covered bare wooden table, a pantry with a characteristic odour, a dresser and a fire place.  There was no hot water supply other than large kettles on the stove or on the fire and gas light provided illumination in the kitchen and other downstairs rooms; there was no artificial lighting upstairs other than candles.  The Bartletts could easily have afforded electricity but Auntie Nell believed that the increasing use of electricity in the country was causing excessive numbers of thunderstorms.  She disliked these and hid in the pantry whenever one passed by!

There were three rooms upstairs – two bedrooms and a box room immediately at the head of the stairs.  There was no bathroom (chamber pots were rather essential at night!) and a water jug and bowl on a marble washstand was used for early morning ablutions.  For the weekly, all-over, wash there was the galvanised iron bath which was normally stored in the garden shed.  The lavatory, which was attached to the back of the kitchen and was shielded by a laurel hedge was accessed from the garden.  There were large gaps under and over the green ‘dunny’ door which allowed the spiders to enter and provided excellent ventilation in the winter.  A wooden duck board served as a pedestal mat and neatly torn pieces of the omnipresent Gloucester “Citizen” were used as toilet paper.  It was an uncomfortable life but I was not aware of anyone ever suffering from poisoning by printer’s ink or gaining a randomly arranged, unintended, anal tattoo!  Furthermore, there were good days, when, for example, a pair of shoes had been purchased and the high quality tissue from the shoe box was offered as an alternative to the “Citizen”.

Living in Gloucester was so different from the Thornbury experience and I loved the city with its busy traffic, park, huge cathedral, multiple cinemas, shops and two (would you believe) railway stations.  Auntie Nell rarely left the house; she appeared to have no close friends and did not go to the cinema or to church but spent most of her time cleaning and cooking.  There were occasional visits to the ‘Co-op’ in Eastgate Street where, because of the rebate, aka the ‘divy’, she bought all of her groceries; I was fascinated by the process of handing over money and receiving food plus a handful of ‘tin’ tokens which could be traded in at the next visit.  The downside of these left wing trading activities was that the right wing Bartletts were locked on to lacklustre ‘Co-op’ brands and were unfamiliar with Coleman, Heinz, Robertson, Shipham and other quality food products.  My mother hated the ‘Co-op’ and its drab contents and took little nutritional delights such as Shipham’s Chicken & Ham Paste, from Thornbury to Gloucester with her!

Uncle on the other hand, went out every morning after his chores which consisted mainly of winding up the clocks, cleaning shoes and brass, ‘doing’ the vegetables and keeping the area that interfaced with Wellington Street clean.  His walks coupled with physical jerks stripped to the waist after his morning wash were, he made me believe, part of his fitness programme although at 5ft 11in and about 17st it was not clear that his programme was working.

Uncle George and Auntie Nell passed away, he of an acute leukaemia in his late 70s and she a few years later of dementia and old age. I missed them!