Evacuees and Prisoners of War

We are grateful to Jack Pridham for allowing us to make use of his book about growing up in Thornbury.  His memories of World War II give us a detailed and fascinating insight into life in the town at that time. 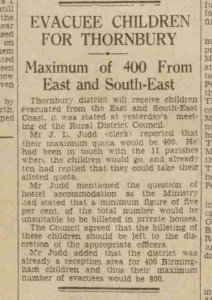 “As well as having soldiers in billets, the town had evacuees, mostly, I think, from the London area.  Our ‘treasures’ were a Mr and Mrs Preston, cockneys from the East End.  He had been a uniformed commissionaire/messenger operating, I believe, between government offices.  He, with a nervous disposition, and she were remembered for rarely leaving the house and he for being a “News of the World” crossword addict.  The paper appeared on Sundays, as it does now, and with a very great deal of luck and a little skill, it was possible to win £50 (or was it £5?) a week.  The clues to these puzzles were simple and came up week after week but they had multiple answers.  However, Mr Preston, aka Ernie, had devised a system, involving vast tomes of answers to previous puzzles and he was able, he said, to forecast the future patterns of alternative answers.  He alleged that he had amassed a ‘small fortune’ using his methods!

Other wartime residents in the town were significantly more famous than Mr and Mrs Preston.  They included Sir Adrian Boult, the conductor, and Cyril Wood, the BBC Drama Director.  Mr Wood on one occasion, brought the BBC Symphony Orchestra and the BBC Singers to the Grammar School Hall for a concert: Sir Adrian did the conducting.  Mr Wood also produced various plays for the town with West End performers and for a ‘War Weapons Week’, a variety show in the Cossham Hall with popular BBC artists.  I doubt whether ‘culture’ in Thornbury, post-war, has ever reached this level!

I suppose we all thought that the war had really come to Thornbury when army-style wooden huts were set up to take prisoners’ of war.  The camp was built on “10 Acre Field” where we had often gone haymaking, at the bottom of Gloucester Road, adjacent to Harry Trayhurn the butcher’s house.  The prisoners, all Italians captured in North Africa, arrived in 1942 or 43.  At first the townsfolk were somewhat apprehensive – the enemy in their midst, so to speak, and not knowing quite what to expect.  The general, unofficial feeling was that there should be no fraternisation, particularly involving English girls and, indeed, this was not possible in the early days as the POWs were restricted to their quarters.  They could easily be seen however, as the huts were near to the road and the prisoners were only confined by a few strands of barbed wire – no more than was normally used to contain a dairy herd.  At first the camp was treated rather like a zoo or a freak show and people would meander slowly past in the evenings with furtive glances that would be unlikely to invoke a string of Italian abuse!  It should be remembered that the vast majority of Thornburians in the 40s had never seen or heard a foreigner before, leave alone someone who was classified as an enemy.

The novelty of the camp and its inmates soon wore off, however, and Italians became part of the scenery – settling into their fairly comfortable home – making gardens, hanging out their washing and at the entrance to the camp, erecting a cement statue of Romulus and Remus, the founders of Rome, being suckled by the wolf.  The art-work was considered by some locals as a sign of defiance but there was never any real trouble in the town.  The Italians seemed to be a mixture of soldiers and sailors and they were split up into two groups, those who wore green uniforms and those in brown.  The former were the collaborators who went out daily to work on the farms and, apart from the curfew hours, were authorised to visit the town.  The ‘browns’ were the fascist element who did not intend to help the British war effort and were initially given less freedom.  However, they too were eventually allowed into town.  They appeared to be a better educated and a more friendly group than the ‘greens’ who spoke little English and, in retrospect, may have been short and dark men from the southern Italian countryside.  ‘Greens’ and ‘browns’ were never seen together.

My father, who often tended to electrical matters in the camp, always talked about the collections of toiletries that they all had which in male Gloucestershire parlance, classified them as “pansies”; some females thought differently, however.  I often talked to one particular ‘brown’, Guisseppe Murelli, and exchanged a “Come stai”; he was a submariner and came from Rome or it may have been Milan.  He and I shared an interest in chemistry and he intended to take a degree in the subject when he returned home.  One had to be careful talking to prisoners because as my mother said, “You will get a bad name!”  Understandably, many townspeople totally ignored the Italians but if one smiled at me then I found it impossible not to smile back.  If nothing else, here were all these strangers from places only heard of in geography lessons who had had exciting wartime experiences which just had to be explored!  If the prisoners had been German or Japanese then I might have reacted differently.  These nations were the real enemies!”