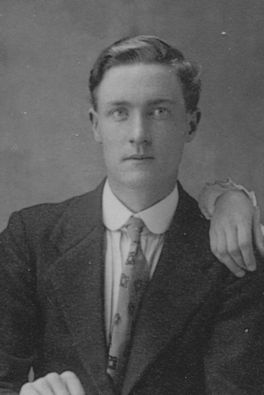 We are grateful to Jack Pridham who spent his childhood years in Thornbury and wrote a book of his memories of the town and his family. In this extract he describes his uncle Nard Symes.  You can read other extracts of Jack’s memoirs by clicking on the links in the left hand column.

The darling of the family was undoubtedly the eighth child, Cecil Bernard.  In choosing these exotic names his father and mother must have sensed that here, they had a child who was going to ‘stand out from the crowd’ and ‘go places’.  With names like that he must certainly have ‘stood out from the crowd’ at school and later in life, he did ‘go places’.  Charlie and Jane may have been right on both counts! Bernard was a family name but Cecil – where did that come from?  One can be fairly sure that no one in the family knew that it was derived from the Latin for “blind”: perhaps he was named after Cecil Rhodes, a hero of the day?  However, somewhere along the line, as a possible result of his experiences at school, “Cecil Bernard” became just “Nard” which was the name used by all of the family when he first appeared on my horizon!  Officially he remained “C. B. Symes Esq”, however.

Nard was as far as I know, the only Symes that went to the Grammar School and Sports Day and Speech Day Programmes suggested that he performed well. At the Sports Day on Thursday, June 3rd 1909 he won the high jump which is perhaps not surprising as he was very tall and might well have been able to step over a bar which lesser mortals would need to jump.  On Speech Day, Friday, December 9th 1910 the programme says that he recited in French a speech by Harpagon from Molière’s “ L’Avare” and on the same day took the part of Old Gobbo in a reading from Shakespeare’s “ Merchant of Venice”, Act II Scene ii, both in front of Sir E. Stafford Howard K.C.B., Mr C. H. Ross M. A (the Headmaster) and Lord and Lady Sheffield; the latter distributed the prizes although there is no record that Nard received one!

The chronology at this point may be inaccurate but assuming that he stayed at school for another three or four years, then in 1914, he would have been faced with World War I.  Like most young men at the time he volunteered for the army but initially was rejected on medical grounds.  Apparently, the medical officer in Bristol asked him to run around the block after which his heart was checked and found wanting: he had an arrhythmia.  However, sometime later, he was deemed to be fit enough to join the Royal Army Medical Corps and he soon found himself in France where he was mentioned in Dispatches.  Later he was severely injured when an enemy shell exploded near to his tent and he was hospitalised for a lengthy period.  It was probably after the armistice that he attended the Imperial College of Science and Technology in London and came away with a Diploma of Imperial College in entomology.  He then joined the Colonial Service and was seconded to Kenya and lived in Nairobi with his wife Betty for many years which included the period covered by World War II. Nard became a leading authority on malaria-carrying mosquitoes and even after he had retired, spent periods in Portugal and Brazil sharing his expertise.

Whenever Nard came home on leave he based himself on The Plain – it had been his home and he loved the place and at one time had thought of buying it to keep it in the family.  It was rather an honour for us to have the ‘top dog’ in residence and I am sure that it made us feel rather superior towards our other relations in the High Street!  I always looked forward to his visits although one almost had to make an appointment to go and talk to him in the front sitting-room where he was normally to be found.  He did a lot to encourage my further education and he was a definite role model.  He was also a man with strict routines which included an early cold bath every morning, an African habit which did not fit the English climate.  It also caused some annoyance as extra water had to be pumped up into the roof to supply the bath – a routine which will be described later.  After the dip came a cooked breakfast which was a rare event in our household, and this was followed by a walk taken with a guardsman’s height and deportment.  At about 6 o’clock when the sun was somewhere near the yard-arm, he w 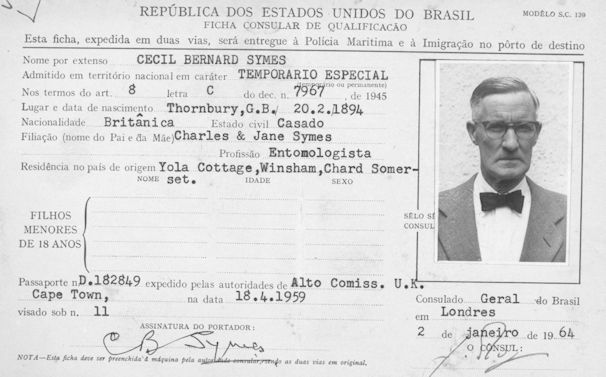 ould go up to his bedroom and return with a small mobile bar made of varnished plywood.  This was obviously custom made and was just large enough to carry four bottles – Gordon’s gin, Johnny Walker whiskey, Schweppes tonic and some bitters, if I remember correctly.  All adults in the room were offered a tipple and he himself, at least on these occasions, always drank pink gins – large gins with a dash of bitters- no ice as there was no refrigerator on The Plain.  One visit I remember well was in the middle of the war when, unannounced, he stepped out of a Bristol taxi in front of the house struggling with a huge bunch of bananas.  They were hung in the cellar and very much appreciated in our ‘bananaless’ world!

Betty, his rather hard, upper class wife rarely came with him; she preferred to stay in London at their flat in Dolphin Square.  Betty died rather suddenly in Africa and Nard was married again to a much more down to earth and homely widow who accompanied him on his Thornbury visits: her name, unfortunately, escapes me.  She, sadly, also died long before he did.  There were no Symes children from either marriage.

I only fell out with Nard once which was when he went to Brazil and left all of his books with me.  I truly and, perhaps, stupidly thought that they were mine to keep but in reality he only intended to use my bedroom as a store for the duration of his secondment.  I, not unexpectedly, wrote my name in all of his precious tomes which did not please him – but we made up!!

Towards the end of his life Nard was a fairly lonely man.  For some reason he had retired to a cottage in Somerset, far away from most of the family, although one nephew, Arthur Pitcher, lived near at hand.  He eventually became blind and, in retrospect, one remembers the meaning of his first name, Cecil!  He lived into his nineties and died from his years.  As his father and mother may have predicted, he stood out and went far.