The attractive row of four houses now known as 15 – 21 Pullins Green in Thornbury form a terrace once known as ‘Victoria Terrace’.  We haven’t seen the deeds of all of these houses yet.  However, the deeds of number 19 show they were all built by George Hodges, the Thornbury builder, about 1870.

All the houses, and the two now known as 23 and 25 Pullins Green, were built on the land shown as Plot 319 on the Tithe Map that was compiled between 1838 and 1840 (see image below on the right).  In the accompanying Tithe Apportionment this piece of land was described as a garden used by John Screen and owned by Hector Maclaine.  We believe that 23 Pullins Green was built in the late 1880s and 25 Pullins Green was built around 1895.  We would be delighted to see the deeds of more of these houses to check on the date they were built and any other details which they might give and would be delighted to hear from the owners of the properties. 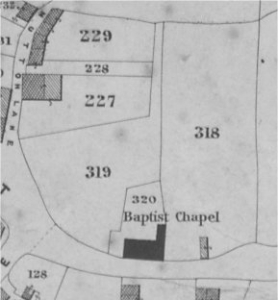 The deeds of Crispin House (2 Crispin Lane) contain a description of the land in 1773 which partially explains the interesting shape of the plot.  The deeds say that the gardens of the houses in Crispin Lane (formerly Mutton Lane) – 227, 228 and 229 on this plan – are adjoining a paddock or close owned by William Osborne and by a lane leading to that close.  The narrow strip at the top right hand corner of 319 used to be a lane.  It still exists although there is no public access from the road.

Hector Maclaine seems to have been an interesting man, as can be seen by the monumental inscription in St Mary’s Church, which describes in detail his military career in the Peninsula War, North America and in France.  Hector Maclaine was a considerable landowner originally from the Isle of Mull, who lived at Kington, where his wife Martha, the daughter of William Osborne, was brought up. Martha Maclaine died in 1841 and Hector died a few years later in 1847 aged 62.  Read more about the Maclaines

Ownership of the land then apparently passed to their son William Osborne Maclaine.  The deeds of 19 Pullins Green show that it was he who sold the land to George Hodges on April 9th 1860 for the sum of £200.  The document says that houses and outhouses and fences were “assured or intended so to be belonging or appertaining ” to this plot.  As there were no buildings on the land, we have taken this to mean that the land was bought with the intention of building the said houses and outhouses.

It is not clear from the 1871 Census whether all the houses had yet been built.  There could well have been two houses, one empty and one occupied by Elizabeth Hawkins a stay maker and her family, or there may have been more houses.  At this point it is not until the 1881 census that we can be sure that all the houses were built and inhabited.  We will continue to look for more information.

George Hodges never lived in any of the houses but let them out to tenants.  After his death in 1905, the houses were managed and let by the Trustees of George Hodges’ Estate.