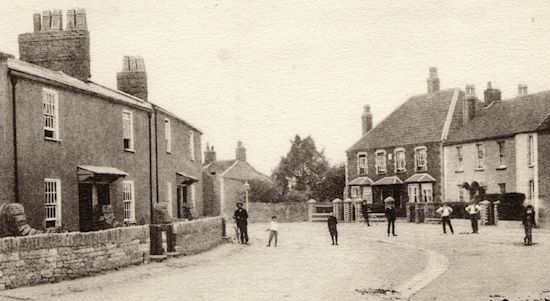 The photograph above shows part of Pullins Green in Thornbury.  There is a terrace of six small cottages on the left of the photo each with one window upstairs and one downstairs.  They each have a front door under a porch shared by the neighbouring cottage.  It is difficult to see number 2 Pullins Green in this photograph but there is man with a bicycle outside the gates for the pair of cottages that are numbers 2 and 4.  The upstairs window of number 2 is visible at the end of the terrace furthest from the foreground.

We had heard that the six cottages were built in the early 19th century for quarry workers, but we have not yet found any evidence to support this theory.  They were built by Daniel Burchell on land he had bought in 1823.  The land was part of a burgage plot bordered by St Mary Street, Horseshoe Lane and Pullins Green.  Click here to read about the early history of that land

The Burchells – the cottages were listed in the 1840 Tithe Survey when they were owned by Daniel Burchell, a carpenter who was then living in St Mary Street.  The cottages were owned by the Burchell family for a long time.  Daniel Burchell died on 16th September 1866 and after a period when they were administered by his Trustees, Jane Burchell, one of Daniel’s children, exercised her right given to the children in his will and bought the six houses from the Trustees for £565.  Jane died on 9th January 1903 aged 78 and her will directed that the properties be passed to her brother, Frederick Burchell.  Frederick died in 1905 and the houses were put up for auction in 1907.  On 9th January 1908 Frederick’s son, Frederick Henry Burchell, bought the six properties, paying £730 for the six properties.  We know that in 1909/10 rents of about three shillings per week (£8 per year) were being paid to Frederick Henry Burchell.  In 1918 the houses were put up for sale at auction as three separate lots of two houses.  Number 2 was not sold and continued to be owned by the Burchell family until 1951.  Click here to read more

The Occupants
Although the Tithe Survey lists the occupiers of the six houses in 1840, it does not make it clear who is living in each house. The six people were: John Screen, Charles Owen Pearce (a cordwainer), Mary Jackson, Mary Langobeare, Mary Olive and John Birt.  In many cases like this we can link people to houses by using the 1841 census.  However in this case it is difficult to link the names in the census to any of these houses and none of the people listed in this census (or the 1851 census) are the same as those listed in the Tithe Survey.

We have gathered some information about the other families who lived in this house.

Alfred & Ann Burchell – we believe that the house was occupied by Alfred Burchell in the 1851, 1861 and 1871 censuses.  Click here to read about this family

‘Mrs Morton’ – the 1885 Rate Book lists Mrs Morton as the occupant of the property.

John Smith – the 1890 Rate Book and 1891 Census show John Smith was living in the house.  Click here to read more

Isaac & Sarah Phillips – the Phillips family occupied the house from about 1899 to the late 1940s.  Click here to read more

Donald & Margaret Reeves – the electoral registers from 1950 to 1957 show Donald W. Reeves and his wife, Margaret A. living in the house.  William Donald Reeves was born on 15th July 1922, the son of Percy Reeves and his wife, Edith (nee Worsley) who were living at Coombe Cottage on the Gloucester Road at the time.

Donald, as he seems to have been called, started at the National (St Mary’s) School in June 1926.  Donald had bought the property from Frederick Henry Burchell on 16th May 1951 for £325.  He sold it to Minnie Eyles on 6th November 1957 for £900.  Donald and Margaret Reeves had moved to The Knapp by 1961.  Read more about the Reeves family

Minnie was born in Minety near Malmesbury in 1874, the daughter of John Timbrel, a butcher and his wife, Ann.  In December 1898, Minnie married William Eyles in the Malmesbury area.  William was born in Woodford in Gloucestershire, the son of Charles Eyles, a carpenter and his wife Elizabeth, and he was baptised at Berkeley on 30th July 1870.

By 1918 William and the family had moved to St Mary Street to the shop on the corner of Horseshoe Lane.  Many people still associate this building as being ‘Eyles and King’ the cycle shop.  The partnership of William Eyles and Charles Adam King being formed when William’s daughter, Hilda, married Charles King.  Another daughter, Gertrude Monica married Frank Hendy.

Others occupants of the house include Richard and Maureen Haskins who lived there in the late 1960’s.  Richard bought the house for £1600 from Minnie Eyles on 11th November 1964.  Richard was described as a motor engineer of Mead Farm, Kington.  They were still there in 1970 electoral register.

By the 1960s, the six houses had fallen into disrepair and lacked modern amenities. They were at one stage condemned by the Council.  They were however saved when the Council chose to renovate and modernise them as part of the town centre development which took place in the 70’s.  On 9th June 1970 Richard sold the property to Thornbury Rural District Council for £3000.