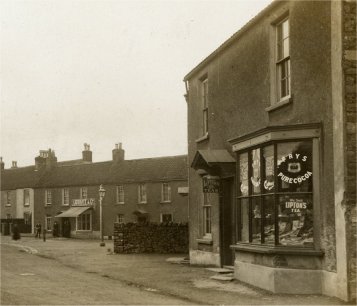 The history of number 25 Pullins Green in Thornbury is very simple.  It was built about 1895.  We suspect it was built by the Hodges family because the Rate Books show that it was owned by George Hodges in 1899 and by his trustees up until at least 1926.  It was occupied from 1895 right up to recent times by the Wall family.

Prior to it being built, it was part of a piece of land which in the 1841 Tithe Survey had been called Plot 319. – click here to read about the early history of this plot

The house is unusual in that it was occupied by the Wall family from the time it was built until the early 1990s and for much of that time it was run as a shop selling groceries or sweets.

We note that William had moved to Thornbury by 1888 as he became a member of the Congregational Church in May of that year.  The church records show that he was working in Bristol in 1890 when he was unable to attend some of their meetings.  Whilst all the other sons seemed to follow in their father’s footsteps and help him on the farm and with his butchery, the 1891 Census shows William had started out by becoming a carpenter and joiner.  He had moved to 48 Clouds Hill Road, Gloucester where he was living with his sister, Maria and her husband Henry Thomas Howell whom she had married in 1887.  Henry was also a carpenter and joiner.  It seems that this was only William’s temporary residence as for most of the year he was still attending church meetings in Thornbury.  His work seemed to take him away from Thornbury as there is another report that he was working in Bristol in 1893 which prevented him attending church for a short period.

We have traced an article in the Bristol Times and Mercury dated 2nd March 1894 which confirms that William purchased a freehold property in John Street but mentions that it belonged to the estate of the late G. D. Crossman.  This property was the house at 5 Pullins Green which he owned for a short time, renting it to Alfred Burchell to whom he subsequently sold the property.

On the 6th June 1895 William married Ellen Sainsbury at The Congregational Chapel.  Ellen was born on 16th May 1870, the daughter of Frederick Sainsbury, an agricultural labourer and his wife, Ellen.  In 1891 Frederick’s family had been living in Horseshoe Lane.  Ellen was a teacher at the Council School at this time.  Read about Frederick and Ellen and their family

We suspect that William and Ellen moved into their newly erected house, now known as 25 Pullins Green, immediately or shortly after their wedding.  The Voters List for Thornbury in 1896 shows William as living in John Street (which included Pullins Green at that time).

They were certainly there in the 1901 Census which shows William was working as a carpenter and grocer and Ellen was a grocer and confectioner, so we know that the house was being used as a shop.  Also living with them at this time was their son, Clifford Alan, born on 3rd February 1899, Ellen’s widowed mother, Ellen Sainsbury aged 71 and a niece, Kate Sainsbury who had been born in Bristol on 12th February 1873.  Kate was working as an assistant in the confectionery shop.

The image of William below on the left is taken from a photograph of Tucker Brothers workforce in 1902.

William and Ellen went on to have at least one more child: Ronald Francis was born 5th March 1905.  Both Clifford and Ronald attended the Council School and went on to the Grammar School.

We understand that William was a keen bowler.

The 1911 Census shows all the family living in the same house including Ellen and Kate Sainsbury. 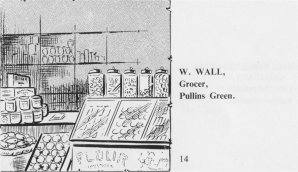 William and Ellen continued to run their shop.  The special register compiled in 1939 in preparation for the war describes William as a retired carpenter and Ellen as a ‘confectionery & sweet shopkeeper’.   Their son was described as a bank clerk and Kate Sainsbury was also living with the family.  Trade directories list the shop as a grocers.  The image on the left is an advert included in the Souvenir Programme for the Coronation in 1953.

One customer recalled that William was known locally by the name of ‘Big Thumb’, a suggestion that he kept his thumb on the scales whilst weighing produce, a practice no doubt associated with more than one trader at this time, whether true or not.

The shop is however best remembered as ‘the sweet shop’ conveniently located for the Council School children to spend their pocket money.  One local recalls that during the time of sweet rationing during the Second World War, the shop was forced to replace their sweets in their window display with bunches of flowers.

Ronald Francis & Louisa Rita Wall
Ron lived with his parents until their deaths.  His record at Thornbury Grammar School shows that he was admitted to the school on 18th September 1916.  He did very well at school and in his Cambridge Senior Exam in 1921 he gained a distinction in Botany.  He left school on 24th May 1922 to become a bank clerk.  Young Ron seemed to like his motor bike.  He was fined £2 for speeding whilst riding down Whiteladies Road in Bristol in 1926 after being warned on a previous occasion.  In May 1935 he was fined again, this time £5.  On that occasion Ronald claimed that the police ‘had the knife in him’ as they waited for each morning.

On 11th March 1942, he married Louise Rita Davies, only daughter of Mr & Mrs Hezekiah and Jemima Davies of Bristol.  We understand that she was known by the name of ‘Rita’.  At the age of eighteen she had worked as a timekeeper in the Engineer’s Department of Bristol Docks.  The photo on the right was taken about 1930 when Ron was playing for Thornbury Football Club.

Ron continued to work as a bank clerk. We have a copy of the Gazette newspaper report in 1950 which refers to an incident when Ron was working as cashier in charge at Henleaze branch of Lloyds Bank in Bristol.  Two young men wearing raincoats entered the bank and one of them pulled a revolver and covered Ron and guard whilst the other man stole a pile of bank notes from the till.  The bandits made no attempt to search the safe which was open at the time and contained a considerable amount of money.   Before the men escaped they warned Ron and the guard not to move for 5 minutes.  They ignored this instruction and chased after the men immediately they had gone and created a hue and cry in which other members of the public chased the robbers.  As a result one of the chasers was shot in the mouth by one of the robbers and he died in hospital shortly after.  The robbers were caught and sent to trial for murder, however before this took place a letter was sent to the bank guard warning him that he and Ronald ‘would get their deserts if our two boys should hang.  We are giving you fair warning to give you plenty of time to wish all your relatives goodbye’.  We understand that the whole incident had a big effect on Ron and he chose to retire shortly after.

Clifford was born on 3rd February 1899.  The Grammar School records show that Clifford became an apprentice engineer after leaving school.  He served in the Royal Navy in World War I and his records show that he served on ‘Vivid II’ in February and March 1918 and on ‘Lion’ until his discharge in June 1919.

Later records show that he had become a mercantile marine engineer.  The image on the left shows Clifford in 1920 when he was serving as a merchant seaman on the SS Patricia.  It shows his merchant seaman record.  Please click on it for a larger image.  He was rated as 7th Engineer at that time.  Clifford appears to have continued to live with his parents up to 1938.

On 6th September 1938 Clifford married Mary Margaretta Coole at Hardwicke.  Mary was the daughter of William Roberts Coole who had been a blacksmith.   Mary lived at Church House in Harwicke and we understand that she was a teacher at the Council School in Thornbury.  Clifford was described as marine engineer.

We note that Clifford and his brother, Ron, purchased two houses, 79 High Street and 81 High Street, in 1938.  It is not clear if either of them ever lived in these houses or whether they were acquired as an investment.  In 1952 number 79 High Street was sold.

At some stage, Clifford and Mary moved away from Thornbury, probably before 1946 as they are not listed as living in the town in the 1946 electoral register.  They settled in Hardwicke near Gloucester.  They had two children, John C. L born in 1947 and Helen P born in 1949.  In 1952 when 79 High Street was sold Clifford’s address was The School House, Hardwicke.

We have been told that tragedy struck this family in 1967.  We are not sure of the details but when their son returned home from university at the end of term, he shot his mother, father and his sister, and he then shot himself.  Ron was extremely distraught because having no children of his own, he had lost his only brother, sister-in-law and nephew and niece in one incident.

Kate was born in Clifton in the March quarter 1873.  We suspect she was the daughter of Ellen’s brother, John Sainsbury and his wife, Eliza Mainstone.  They had married in the March quarter 1873 in Clifton.  It looks like Eliza died in child-birth or shortly after as the records show the death of an Eliza Sainsbury in March quarter 1873 and John seems to have re-married in 1880 to Mary Ann Cullimore from Tytherington.  Thus Kate was taken in first by her grandparents, Frederick and Ellen, and then by her aunt, Ellen, who had by then married William Wall.

Kate never married and she continued living with the Wall family and assisted William and Ellen in the running of the shop.  The deeds of 79 High Street indicate that Kate was the owner of the property next door, number 77 High Street and it is likely that she acquired this property in 1938.  She died on November 15th 1960 aged 87 years.  She is remembered by many of the older residents of the Green and customers of the Wall’s shop.